This article is about gargoyles, the statues. For other uses, see Gargoyle (disambiguation). 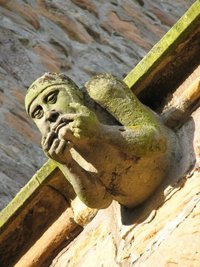 In architecture, gargoyles (from the French]] gargouille, originally the throat or gullet, cf. Latin gurgulio, gula, and similar words derived from root gar, to swallow, the word representing the gurgling sound of water; Ital. doccione; Ger. Ausguss, Wasserspeier) are the carved terminations to spouts which convey water away from the sides of buildings.

A similar type of sculpture that does not work as a waterspout and serves only an ornamental or artistic function is called a chimera, although these are popularly referred to as gargoyles also. 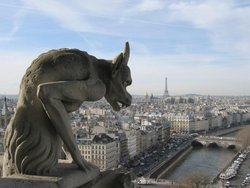 The term gargoyle is most often applied to medieval work, but throughout all ages some means of throwing the water off roofs, when not conveyed in gutters, was adopted. In Egypt gargoyles ejected the water used in the washing of the sacred vessels which seems to have been done on the flat roofs of the temples. In Greek temples, the water from roofs passed through the mouths of lions whose heads were carved or modelled in the marble or terra cotta cymatium of the cornice. At Pompeii many terra cotta gargoyles were found that are modelled in the shape of animals.

A local legend that sprang up around the name of St. Romanus ("Romain") (631 – 641 A.D.), the former chancellor of the Merovingian king Clotaire II who was made bishop of Rouen, relates how he delivered the country around Rouen from a monster called Gargouille, having had the creature captured by a liberated prisoner. The gargoyle's grotesque form was said to scare off evil spirits so they were used for protection. In commemoration of St. Romain the Archbishops of Rouen were granted the right to set a prisoner free on the day that the reliquary of the saint was carried in procession.

Gargoyles, or more precisely chimerae, were used as decoration on 19th and early 20th century buildings in cities such as New York (where the Chrysler Building's stainless steel gargoyles are celebrated), and Chicago. Gargoyles can be found on many churches and buildings.

In contemporary fiction, gargoyles are typically depicted as a winged humanoid race with demonic features (generally horns, a tail, talons, and may or may not have a beak). Gargoyles can generally use their wings to fly or glide, and are often depicted as having a rocky hide, or being capable of turning into stone in one way or another, a reference to their structural roots. 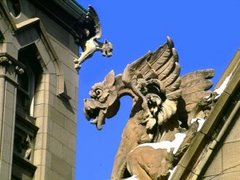 Gargoyles as a distinct race have featured in several works of fantasy fiction, such as Terry Pratchett's Discworld series (Discworld gargoyles) and the Dungeons & Dragons (D&D gargoyles) and Rifts role-playing games. One of the Gargoyles that lives on the Discworld has taken up a position in the Ankh-Morpork City Watch where he is known as Constable Downspout. They were also prominently featured in a Disney animated series, Gargoyles, and played a role in that company's adaptation of Victor Hugo's The Hunchback of Notre Dame. Actress Adrienne Barbeau played a violent gargoyle in the TV series Monsters. Actress Rae Dawn Chong played a gargoyle in human form in Tales from the Darkside: The Movie. A gargoyle named Firebrand is featured in the Ghosts 'n Goblins series, whose infamy as a difficult foe to defeat cast him as a hero in his own Gargoyle's Quest series. In White Wolf's now discontinued role playing series Vampire: The Masquerade Gargoyles were not a separate race but rather an obscure bloodline, (minor clan), of vampires created by the blood mages of Clan Tremere to serve as guards and servants, they were the result of experiments with captured members of other Clans. Many of these creatures escaped their bondage and struck out on their own. The Gargoyle (World of Darkness) was released as a playable bloodline alongside Caitiff and Lasombra antitribu, they could fly and also possessed strange abilities that were linked to stone.

Gargoyle is Monster in My Pocket #72.

Two otherwise-unrelated made-for-TV movies which feature the creatures as villains are Gargoyles (1972, no relation to the Disney TV series) and Gargoyle: Wings Of Darkness (2004).

Characters in Neal Stephenson's Snow Crash use the term "gargoyle" to refer to people who wear a large amount of information-gathering gear on their persons.

In Spider-Man: The Animated Series, Spider-Man has a favorite gargoyle statue, who he named "Bruce", which he sometimes talks to when in contemplation.

The X-Files season 3 episode "Grotesque" deals with a serial killer named Mostow who appears to be obsessed with gargoyles. Mostow claims an evil gargoyle-like spirit takes possession of him and forces him to commit his crimes. Although the serial killer is arrested similar murders continue. When agents Skully and Mulder visit his apartment, they find hundreds of Mostow's gargoyle artwork. In one scene, Mulder discovers the corpse of a victim encased in clay that’s shaped in the form of a gargoyle.