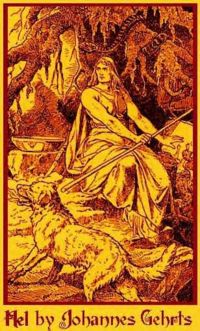 A depiction of Garmr beside Hel, who is holding a staff, by Johannes Gehrts.

Garmr or Garm is a dog in Norse mythology sometimes seen as a hellhound, comparable to Cerberus.

Then shall the dog Garmr be loosed, which is bound before Gnipa's Cave
he is the greatest monster; he shall do battle with Týr, and each become the other's slayer. - Brodeur's translation

The best of trees | must Yggdrasil be,
Skithblathnir best of boats;
Of all the gods | is Othin the greatest,
And Sleipnir the best of steeds;
Bifrost of bridges, | Bragi of skalds,
Hobrok of hawks, | and Garm of hounds. - Bellows' translation

Now Garm howls loud | before Gnipahellir,
The fetters will burst, | and the wolf run free;
Much do I know, | and more can see
Of the fate of the gods, | the mighty in fight. - Bellows' translation

Baldrs draumar describes a journey which Odin makes to Hel. Along the way he meets a dog.

Then Othin rose, | the enchanter old,
And the saddle he laid | on Sleipnir's back;
Thence rode he down | to Niflhel deep,
And the hound he met | that came from hell.

Bloody he was | on his breast before,
At the father of magic | he howled from afar;
Forward rode Othin, | the earth resounded
Till the house so high | of Hel he reached. Bellows' translation