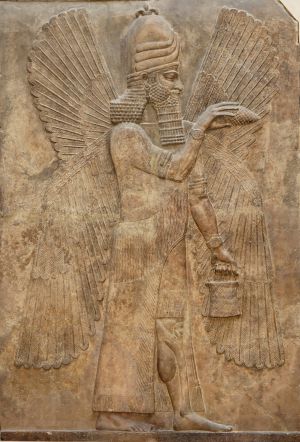 Genie is the usual English translation of the Arabic term jinni, but it is not an Anglicized form of the Arabic word, as is commonly thought. The English word comes from French génie, which meant a spirit of any kind, which in turn came from Latin genius, which meant a sort of tutelary or guardian spirit thought to be assigned to each person at birth. The Latin word predates the Arabic word jinni, and the two terms have not been shown to be related. The first recorded use of the word in English was in 1655 as geny, with the Latin meaning. The French translators of the Arabian Nights later used the word génie as a translation of jinni because it was similar to the Arabic word both in sound and in meaning; this meaning was also picked up in English and has since become dominant. 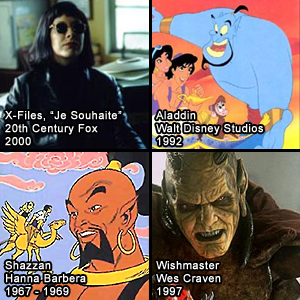 The Western interpretation of the genie is based on the Aladdin tale in the Western version of The Book of One Thousand and One Nights, which told of a genie that lived in an oil lamp and granted wishes to whoever freed him from the lamp by polishing it. The number and frequency of wishes varies, but typically it is limited to three wishes.

Awareness about the origins of the genie myth, and the use of the original spelling djinn has become more common. Usually, the term djinn is used by authors who wish to convey a more serious interpretation of the mythical creature, rather than the comical genies the Western public has become used to, such as wikipedia:Robin Williams' character in Aladdin.