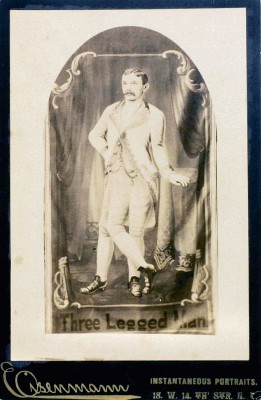 George Lippert' right leg was branched into two legs at the knee, with two thigh bones and separate, (supposedly) functional knee joints. One of these, the "proper" right leg, ended in a clubbed foot with six toes, which was useless for walking. Until the age of sixteen, Lippert claimed, he used all three legs for walking, but as he reached adulthood he became so insecure about his deformity that he began strapping one of his two right legs behind him and concealing it in his pants leg. With time, the muscles atrophied and the leg ceased to be useful for walking. At least, this was the story he told doctors in 1885; in his sideshow pitch, he claimed that he had broken the leg in a train accident in France, rendering it useless. Additionally, Lippert possessed two functioning hearts, side-by-side in his chest.

George Lippert, was born in Bavaria around 1842. He had three brothers and three sisters, all normal, and two normal parents. Lippert, who was said to speak five languages, entered the sideshow at the age of 33 and came to the United States to work with the Barnum circus. He was paid handsomely, but spent frivolously, and by the time he retired to Salem, Oregon, in 1899, he had only 25 cents to his name, and complained that newcomer Frank Lentini, with his much more attractive third leg, had stolen his audience. He eventually found a benefactor in a florist named Mary Riggs and Lippert whom with he cohabitated in Salem, Oregon for seven years. In the fall of 1905, Lippert contracted a severe cold, which developed into tuberculosis. On July 24, 1906, his right heart stopped beating, and he succumbed two weeks later. Upon autopsy, doctors declared that if Lippert had not had tuberculosis he could have easy lived on for many years.