In Greek mythology, Geryon (Geryones, Geyron), son of Chrysaor and Callirrhoe, was a fearsome triple-bodied giant. 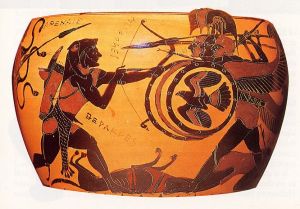 Geryon had three heads and three bodies with a total of six arms. The three bodies were joined to one pair of legs, but apart from this weird feature, his appearance was that of a warrior. He owned a two-headed hound named Orthrus, which was the brother of Cerberus, and a herd of magnificent red cattle that were guarded by Orthrus, and a man named Eurythion.

Geyrion dwelt on the island Erytheia of the mythic Hesperides in the far west of the Mediterranean. A more literal-minded later generation of Greeks associated the region with Tartessos in the province of Cadiz in southern Spain. The early third-century Apollonius of Tyana notes an ancient tumulus at Gades raised over Geryon as for a Hellenic hero: "They say that they saw trees here such as are not found elsewhere upon the earth; and that these were called the trees of Geryon. There were two of them, and they grew upon the mound raised over Geryon: they were a cross between the pitch tree and the pine, and formed a third species; and blood dripped from their bark, just as gold does from the Heliad poplar" (v.5).

The Tenth Labour of Heracles

Heracles was required to travel to Erytheia, in order to obtain the Cattle of Geryon as his tenth labour. On the way there, he crossed the Libyan desert (Libya was the generic name for Africa to the Greeks), and became so frustrated at the heat that he shot an arrow at Helios, the Sun. Helios begged him to stop, and Heracles demanded the golden cup he used to sail across the sea each night. Heracles used it to reach Erytheia, a favorite motif of the black-figure vase-painters. Such a magical conveyance undercuts any literal geography for Erytheia, the "red island" of the sunset.

When Heracles reached Erytheia, no sooner had he landed than he was confronted by the two-headed dog, Orthrus. With one huge blow from his olive-wood club, Heracles killed the watchdog. Eurythion the herdsman came to assist Orthrus, but Heracles dealt with him the same way.

On hearing the commotion, Geryon sprang into action, carrying three shields, three spears, and wearing three helmets. He pursued Heracles at the River Anthemus but fell a victim to an arrow that had been dipped in the venomous blood of the Lernaean Hydra, shot so forcefully by Heracles that it pierced all three of Geryon's bodies. With a shrill, despairing groan, Geryon swayed, then fell, nevermore to rise. In some versions, Heracles tore Geryon's bodies into three separate pieces.

Heracles then had to herd the cattle back to Eurystheus. In Roman versions of the narrative, on the Aventine hill in Italy, Cacus stole some of the cattle as Heracles slept, making the cattle walk backwards so that they left no trail, a repetition of the trick of the young Hermes. According to some versions, Heracles drove his remaining cattle past a cave, where Cacus had hidden the stolen animals, and they began calling out to each other. In others, Caca, Cacus' sister, told Heracles where he was. Heracles then killed Cacus, and according to the Romans, founded an altar where the Forum Boarium, the cattle market, was later held.

To annoy Heracles, Hera sent a gadfly to bite the cattle, irritate them and scatter them. The hero was within a year able to retrieve them. Hera then sent a flood which raised the level of a river so much, Heracles could not cross with the cattle. He piled stones into the river to make the water shallower. Heracles then had to kill (or by some accounts, mate with) a monster that was half-woman and half-serpent. When he finally reached the court of Eurystheus, the cattle were sacrificed to Hera.

The poet Stesichorus wrote a song of Geryon (Geryoneis) in the 6th century BC, which is the best source of this epic, and also contains the first reference to Tartessus.

The milky way was so named by the ancient Greeks because it appears to be a smear of milk across the sky. Some, however, were able to discern some individual stars in the sky, and as such, it became to them a vast herd of cattle, whose milk filled the gaps between them. The star Capella, which is part of Auriga, was known to the Greeks as the Shepherd's star (as some groups considered Auriga to be a shepherd driving a chariot, as well as the chariot, whilst keeping a goat slung over its left shoulder). Capella is very close to, but just outside, the Milky Way, and as such, considered a shepherd, appears to be herding it.

Nearer to the sun than Canis Major, and also appearing to guard the milky way in this area of the sun's transit as well as Canis Major and Capella, is Orion the giant. Traditionally Orion is considered a single giant, but it also equally possible to differentiate it into three separate whole bodies joined at the belt, as Geryon is described, particularly as the legs appear in quite distinct direction, and alternative drawings (taking into account slightly fainter stars than basic diagrams) of the constellation normally depict three rather than two arms, the third and second sharing the same right shoulder.

The sun manages to pass these obstacles, passing through the Milky Way. Auriga appears to be parked in the Milky Way itself, and as such some of the cows of the milky way herd are in it. After the Milky Way, the sun meets Gemini itself. Depictions of Gemini vary as to whether it leans east or west, in the westerly direction it is possible to draw the constellation as two stick man, and Gemini's feet rest in the Milky Way. In the easterly depictions, one of the twins is in the milky way, and the other is outside it, and as such, one twin has stolen some cows, and the other, the one whom the sun's transit crosses, has not. In the myth of Castor and Pollux (the usual names of the twins in Gemini), their deaths are due to an argument over the theft of cattle.

Geryon is sometimes identified as a chthonic death-demon, mainly because of the association with the extreme western direction. In Dante's Divine Comedy Geryon has become a winged beast with the tail of a scorpion but the face of an honest man. He dwells at the cliff between the seventh and eighth circles of Hell (the circles of violence and fraud, respectively).