The mythology and legends of many different cultures include mythological creatures of human appearance but prodigious size and strength. "Giant" is the English word commonly used for such beings, derived from one of the most famed example: the gigantes of Greek mythology. 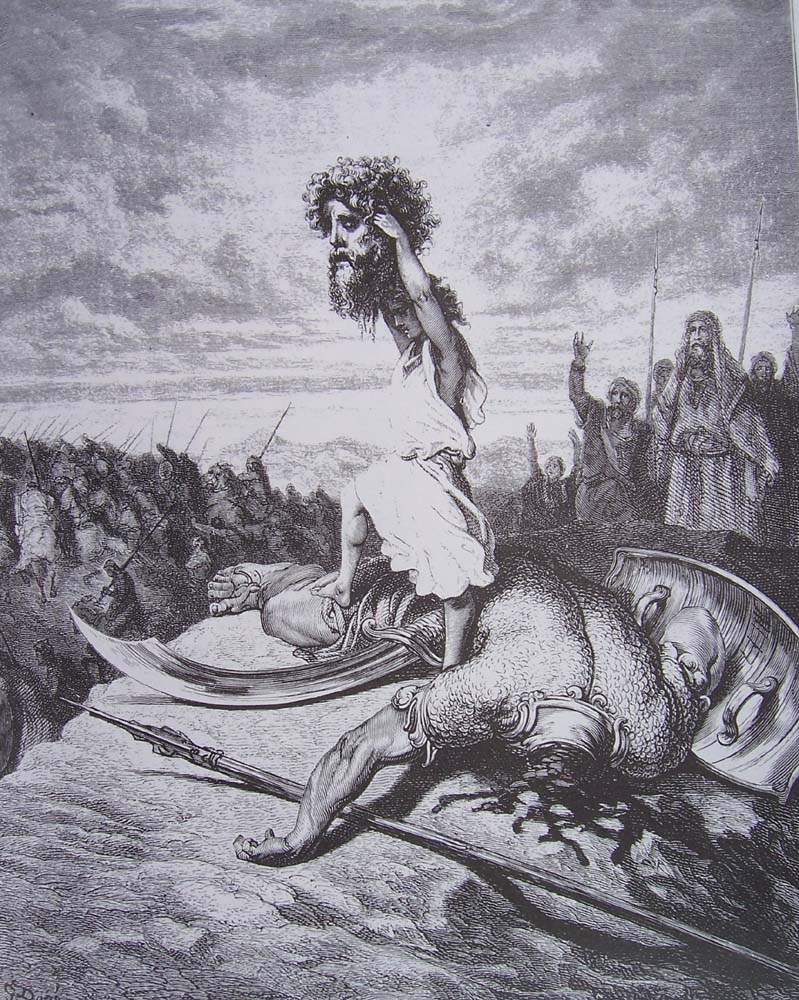 David and Goliath by Gustave Dore

In various Indo-European mythologies, gigantic peoples are featured as primeval races associated with chaos and the wild nature, and they are frequently in conflict with the gods, be they Olympian gods or Norse. There are also historical stories featuring giants in the Old Testament, perhaps most famously Goliath. In many cases giants look exactly like humans physically (save their enormous size), though some will have distinguishable differences such as horns, tusks, claws, or differently-proportioned body parts such as large hands and feet. Some giants look nothing like humans save for a humanoid shape.

They are attributed superhuman strength and physical proportions, a long lifespan, and thus a great deal of knowledge as well. Yet, they are weak in both morals and imagination. Fairy tales such as Jack and the Beanstalk have formed our modern perception of giants as stupid and violent monsters, frequently said to eat humans, and especially children. However, in some more recent portrayals, like those of Oscar Wilde, the giants are both intelligent and friendly.

Giants of the Bible

The Bible mentions an ancient race called the nephilim, which has often been translated as "giants." Genesis states that:

There were giants in the earth in those days; and also after that, when the sons of God came in unto the daughters of men and they bore children to them, the same became mighty men who were of old, men of renown. (Gen. 6:4 King James Version of the Bible|KJV)

Post-biblical tradition holds that Nimrod (king)|King Nimrod was a member of this race.

The Anakites, who "come from the Nephilim" (Numbers 13:28-33), the Emites (Deuteronomy 2:10), and the Rephaites (Joshua 12:4) were giants living in the Promised Land. The Bible also records the famous strife between David and the giant Goliath, ending with the defeat of the latter. Goliath was "six cubits and a span" in height--over nine feet tall (1 Samuel 17:4). However, an earlier translation of this tale found in the Dead Sea Scrolls puts Goliath at just under two meters tall, rather than three meters as had been written in later versions. This greatly increases the validity of claims that Goliath may have been a real person, being gigantic in stature compared to the average height of a man in the early classical era of around 1.6 meters compared to around 1.75 today.

Gog and Magog are usually considered to be giants, and are also found in the folklore of Britain.

Not to be confused with the Titans, the Giants or gigantes (γίγαντες) were born together with the Furies from Gaia (Γαία), the Earth and Ouranos (Ουρανός) when he was castrated.

The Giants were as tall as mountains and so strong as to be unbeatable. According to Apollodorus, their shaggy hair drooped from their heads and chins, and they had dragon scales on their feet. The mightiest Giants were Porphyrion and Alkyoneus.

Alkyoneus could remain immortal as long as he fought in the land of his birth, Pallene, in the region of Thrace. A bold troublemaker, Alkyoneus dared to steal some cows owned by the Sun.

They were involved in a conflict with the Olympian gods called the Gigantomachy (Γιγαντομαχία), which was eventually settled when the hero Heracles decided to help the Olympians. The Greeks believed some of them, like Enceladus, to lay buried from that time under the earth, and that their tormented quivers resulted in earthquakes and volcanic eruptions.

The Giants tossed house-sized boulders and burning oak trees at Mount Olympus to pass the time. The Gods were slow to react, as they feared the giant’s reaction. Zeus had received an oracle, or prediction of the future. This oracle declared that the gods could kill the Giants only if they had the help of a mortal. This mortal was Hercules. The Earth, who was the mother of the Giants, learned this too, and she tried to prevent Hercules from going to help the gods. But Zeus had a plan. First he forbade the Sun from shining, then the Moon and the Dawn. Before anyone knew what was happening, he sent Athena with her chariot to bring Hercules up to Mount Olympus.

After another quarrel between Gods and Giants, the war was declared and soon the mighty Giants were climbing up Mount Olympus led by Alkyoneus. Hercules came to the cliff where he could see the monstrous Giants approaching. He drew his bow and shot Alkyoneus with an arrow that sank completely into the giant's shoulder. The giant lost his grip and fell to the ground unconscious, with an enormous crash.

Soon Alkyoneus began to revive. But before he woke up completely, Athena told Hercules that Alkyoneus would not die unless he was outside of his birthplace, in Thrace. So Hercules dragged Alkyoneus far away, and there he died.

Meanwhile, Porphyrion had reached the top of Olympus. He had Hera cornered between the rocks and the sheer cliff. When Porphyrion began to attack the goddess, Hera called for help. Zeus cast his thunderbolt at Porphyrion, leaving him dazed, and Hercules, who had just rejoined the battle, shot him dead with an arrow.

Now all the gods and Giants entered the fight. Apollo shot one of the Giants in the right eye, and Hercules shot him in the left eye. Dionysos killed one by whacking him with his thyrsus, or staff. Hecate set another Giant on fire with torches. Hephaistos eliminated one by pelting him with white-hot metal.

Two of the Giants turned to flee. Athena caught the first one and imprisoned him under the island of Sicily; Poseidon broke off a piece of the island of Cos and threw it at the other. Hermes wore Hades' helmet and slew a Giant as he ran away, and Artemis killed another. Even the Fates killed a couple of Giants, fighting with clubs made of bronze. Finally it was all over. Zeus had struck down the rest of the Giants with his thunderbolts, and Hercules finished them off where they lay.

Greek mythology also features the cyclopes (κύκλωπες) —well remembered for their encounter with Odysseus in Homer's Odyssey—giants (though not gigantes) with only one eye. The titans were as well often imagined to be of great size and strength, hence the word titanic.

Herodotus in Book 1, Chapter 68, describes how the Spartans uncovered in Tegea the body of Orestes which was seven cubits long -- around 10 feet. In his book The Comparison of Romulus with Theseus Plutarch describes how the Athenians uncovered the body of Theseus, which was of more than ordinary size. The kneecaps of Ajax were exactly the size of a discus for the boy's pentathlon, wrote Pausanias. A boy's discus was about twelve centimeters in diameter, while a normal adult patella is around five centimeters, suggesting Ajax may have been around 14 feet tall.

In Germanic mythology – of which Norse mythology, due to its extensive Icelandic sources, is the only one well recorded – the giants (jötnar in Old Norse, a cognate with ettin) are often opposed to the gods. They come in different classes, such as frost giants (hrímþursar) fire giants (eldjötnar) and mountain giants (bergrisar). The giants are the origin of most of the monsters in Norse mythology (e.g. the Fenrisulfr), and in the eventual, apocalyptic battle of Ragnarök the giants will storm Asgard, the home of the gods in Heaven, and defeat them in war, thus bringing about the end of the world. Even so, the gods are themselves related to the giants by many marriages, and there are giants such as Ægir, Mímir and Skaði, who bear little difference in status to them. Norse mythology also holds that the entire world of men was once created from the flesh of Ymir—a giant of cosmic proportions, by some considered to share a root with the name Yama of Indo-Iranian mythology.

A bergrisi appears as a supporter on the coat of arms of Iceland.

Giants in Other European Legends 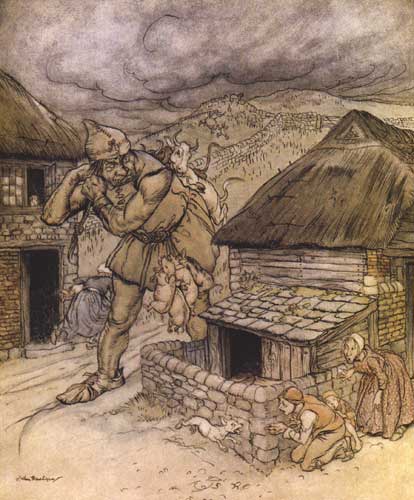 "Jack the Giant-Killer" by Arthur Rackham

Aside from mythology and folklore, mysterious remains of giants have been found in America. Giants are usually classified as human-like remains that are 7'-5" or more in height. The book Forbidden Land by Robert LymanTemplate:Fact recounts the following finds:

A decayed human skeleton claimed by eyewitnesses to measure around 3.28 metres (10 feet 9 inches tall), was unearthed by labourers while ploughing a vineyard in November 1856 in East Wheeling, now in West Virginia.

A human skeleton measuring 3.6 metres (12 foot) tall was unearthed at Lompock Rancho, California, in 1833 by soldiers digging in a pit for a powder magazine. The specimen had a double row of teeth and was surrounded by numerous stone axes, carved shells and porphyry blocks with abstruse symbols associated with it.

Several mummified remains of red haired humans ranging from 2-2.5 metres (6.5 feet to over 8 feet) tall were dug up at Lovelock Cave, (70 miles) north-east of Reno, Nevada, by a guano mining operation. These bones substantiated legends by the local Paiute Indians regarding giants which they called Si-Te-Cahs. For some reason scientists did not seem to want to investigate these finds further so many of the bones were lost. Fortunately one of the giant Lovelock skulls is still preserved today. It measures almost 30cm (1 foot) tall and resides along with other various Lovelock artefacts in the Humboldt Museum in Winnemucca, Nevada. Some of these artefacts can also be found in the Nevada State Historical Society's museum at Reno.

Aside from Forbidden Lands, we can find other historical information on the remains of giants.

that the main character fights.