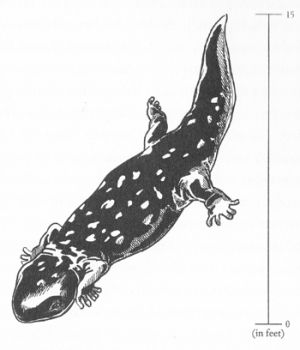 The Trinity Alps wilderness is the second largest designated wilderness area in California, spanning three national forests and covering 517,000 acres. Moreover, the Trinity Alps are home to an abundance of wildlife including reports of a giant salamander, which have trickled in for more than seven decades.

The Trinity Alps giant salamander was first reported in the 19th century and has not been reported frequently since the early 20th century. The first modern documented sighting came during the 1920s when Frank L. Griffith, while hunting deer near the head of the New River, reported that he spotted about five giant salamanders at the bottom of the lake ranging from 2-3 metres (5 to 9 feet in length). Moreover, Griffith further reported that he was able to catch one of these giant salamanders on a hook, but was unable to pull it out of the water, forcing him to let the creature go.

In 1948, after hearing of the New River encounter, biologist Thomas L. Rodgers made four different yet equally unsuccessful trips to the Trinity Alps in search of the giant salamander. Rodgers speculated that these giant salamanders may be an abnormally large group of Dicamptodon, or Pacific giant salamander, that had been isolated from the more common version, which only reaches approximately 1 foot in length. He also hinted at the possibility that there could be a relict population of Megalobatrachus, (a form of giant salamander that inhabits the fast-moving mountain streams of Japan and China and can grow to lengths of 5 or 6 feet).

That being said, in 1951 Herpetologist George S. Myers wrote a piece in the Scientific Journal stating that he thought the link between the Trinity Alps giant salamander and the Asian Megalobatrachus made sense. Myers went on to recall his encounter with a giant salamander captured in the Sacramento River in 1939. Myers was contacted by a commercial fisherman who found the creature entangled in one of his catfish nets. Myers was able to carefully study the specimen for nearly 30 minutes and noted that it was a different colour than the Japanese and Chinese species. It was dark brown colouration, not a slate-grey colour (as found in the Asian giant salamander); it also had dull yellow spots, which is unusual because the Chinese and Japanese species have no spots. Myers wrote: 'The animal was a fine Megalobatrachus, in perfect condition… It was between 25 and 30 inches in length…The source of the specimen is, of course, unknown. Its strange coloration even suggested the possibility of a native Californian Megalobatrachus, which would not be surprising, but no other captures have been reported.'

Several years after Myers's report was published animal handler Vern Harden of Pioneer, California, claimed to have seen a dozen giant salamanders in a remote lake in the Trinity Alps region. The lake known to locals as Hubbard Lake. The animal handler claims to have managed to hook one of the creatures by his fishing rod but was unable to pull it up, having to release it due to an oncoming snowstorm. Vern Harden estimated the creature to be about 8 feet long; this was before he turned it loose. Harden’s claims made it to the ears of explorer and naturalist Father Hubbard, a Jesuit scholar to which Hubbard Lake was named after. Father Hubbard noted, based on his examination of the growing body of eyewitness reports, that there may be something more to the reports of giant salamanders reported from the area.

So much so that during the period 1958 to 1959 it is believed that both Father Hubbard and his brother Captain John D. Hubbard were associated with expeditions in search of the giant salamanders. In 1960 Father Hubbard stated that he had established the existence of huge amphibians in the Trinity region; unfortunately for us and the rest of the cryptozoological world no record of the Hubbard expeditions can be located to this day and some speculate that they may have never even taken place.

Following Father Hubbard’s testimony, legendary monster hunter and Texas oil magnate Tom Slick accompanied the entourage of giant salamander trackers in 1960. Slick told the members of his Pacific Northwest Expedition (who were primarily focused on bigfoot research) to seek out a live specimen of giant salamander. These instructions did not bode well with some of Slick’s hired bigfoot hunters who felt searching for the giant salamander was a waste of time that took them away from their more important academic pursuits.

Nevertheless, after Slick’s exhaustive search for the creature, in the end Slick and his team returned empty-handed.

That same year, on the 1st September, three zoology professors, Robert C. Stebbins of the University of California Berkeley, Tom Rodgers of Chico State College and Nathan Cohen of Modesto Junior College formed their own giant salamander expedition. Tom Rogers returned this time even more optimistic that his team would find the beast even though he led several unsuccessful expeditions in 1948. The team often mistook sunken or half-submerged logs for giant salamanders.

Nevertheless, the team was successful in that it was able to collect almost a dozen Pacific giant salamanders or Dicamptodons, but the largest was only 11 ½ inches long, a far cry from the reported 8-foot length associated with the mysterious Trinity Alps giant salamander. Rogers, who was deeply sceptical about the giant salamander from the beginning, hoped that this evidence, or lack of evidence, would put to rest any rumours circulating around about giant salamanders in the Trinity Mountains of California.

Rogers’s official 1962 debunking of the giant salamander seemed to end most cryptozoological interest in the creature that was until 1997 when Kyle Mizokami’s Trinity Alps giant salamanders expedition was established. Mizokami, a Japanese-American writer, put aside his research on American Indian legends, which included bigfoot, to hunt for the Trinity Alps Giant Salamander. Sadly, as with many similar ventures including that of Tom Slick, Mizokami returned with no evidence to support the existence of giant salamanders living in the Trinity Mountains.

Mizokami’s expedition was the last mainstream project to research and seek out proof of the Trinity Alps giant salamander and to this day no physical evidence has been found to support the existence of such a creature.