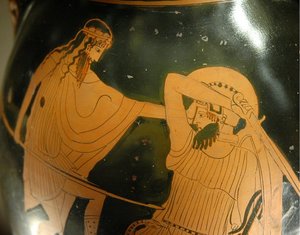 In Greek mythology, the Gigantes were a race of giants, who defied the olympians gods.

They were children of Gaia, who was fertilized by the blood of Uranus that resulted from his castration by Cronus.

Led on by Alcyoneus and Porphyrion, the Gigantes hoped to reach the top of Mount Olympus by stacking the mountain ranges of Thessaly, Pelion and Ossa, on top of each other. The Olympians called upon the aid of Heracles after a prophecy warned them that he was required to defeat the Gigantes. Heracles slew not only Alcyoneus, but dealt the death blow to the Gigantes who had been wounded by the Olympians.

"Power is latent violence, which must have been manifested at least in some mythological once-upon-a-time. Superiority is guaranteed only by defeated inferiors," Walter Burkert remarked of the Gigantomachy (Burkert p 128) 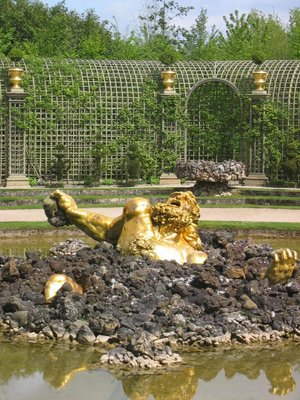 This battle parallels the Titanomachy, a fierce struggle between the upstart Olympians and their older predecessors, the Titans (who lost the battle). In the Gigantomachia, however, the Olympians were already in power when the Gigantes rose to challenge them. With the aid of their powerful weapons and Heracles, the Olympians defeated the Gigantes and quelled the rebellion, confirming their reign over the earth, sea, and heaven, and confining the Gigantes to the Netherworld.

Whether the Gigantomachia was interpreted in ancient times as a kind of indirect "revenge of the Titans" upon the Olympians — as the Gigantes' reign would have been in some fashion a restoration of the age of the Titans — is not attested in any of the few literary references.

According to the Greeks of southern Italy, the Gigantes were buried beneath the earth by the gods where their writhing caused volcanic and other thermal activity.

In iconic representations the Gigantomachy was a favorite theme of the Greek vase-painters of the fifth century (illustration above right). More impressive depictions of the Gigantomachy can be found in classical sculptural relief, such as the great altar of Pergamon, where the serpent-tailed giants are locked in battle with a host of gods.

The most important of the Gigantes were Alcyoneus slain by Heracles, Porphyrion destroyed by Zeus with lightning bolts, |Enceladus and Pallas killed by Athena, Polybotes crushed by Poseidon beneath Nisyros Island, Hippolytus by Hermes, Ephialtes shot by Apollo with arrows, Mimas by Hephaestus with bolts of metal and Clytius by Hecate with flaming torches.