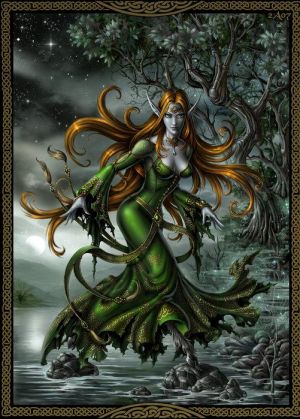 The glaistig or green lady is a solitary water fairy of the Scottish Highlands.

According to one legend the glaistig was once a mortal noblewoman, to whom a fairy nature had been given or who was cursed with the goat's legs and immortality, and since has been known as The Green Lady.

In most stories, the creature is described as a beautiful woman with dusky or gray skin and long blonde hair. Her lower half is that of a goat, usually disguised by a long, flowing green robe or dress.

In the diverse and changing traditions of the Highlands, the Glaistig was seen as both benevolent and malevolent towards humans. In one aspect she even takes the role of the Banshee, wailing at the death of important people.

The glaistig may take the form of a beautiful woman, especially one already known to the male victim; after offering sexual favours like a camp follower, she leaves her male victim with his throat cut, every drop of blood sucked from him. Other such tales have her casting stones in the path of travellers or throwing them off course.

In some variant stories the glaistig may be seen as benevolent, fond of children and a protector of old people. Libations of milk were poured for her, especially on selected stones; this veneration may be linked with older fertility customs. The glaistig has been described in some folklore as watching over children while their mothers milked the cows and fathers watched over the herds.

The glaistig frequented the lonely lochs and rivers in the Highlands of Scotland, such as Ardnacaillich, Donolly Castle, Loch Fyne, Crathes Castle and in Wales at Caerphilly. A similar tale has also been told of Henniker, New Hampshire.

A woman who lived on an island near the Firth of Clyde was smitten by the fairies and was granted her unspoken wish to become one of them. Afterwards, she dedicated herself to watching over the cattle of the island until a farmer offended her greatly through rude treatment and she left, making her way to the mainland by leaping to nearby islets before snagging her hoof in the rigging of a passing ship. She, according to this tale, fell into the ocean and presumably drowned, or at any rate was never seen again.

In the village of Ach-na-Creige on the Isle of Mull, a Glaistig served as the guardian of the local cattle. It was customary to pour some milk into a holed stone on the cattle fold as a libation to the Glaistig. This small token was the only payment she requested for her long vigils. A local herds boy - who was widely known for his mischief - decided he was going to have some fun at the Glaistig's expense, and poured boiling milk into the holed stone. The Glaistig severely scalded her tongue, and was so angry that she left the local countryside, and her wardenship of the village cattle for good.