A gnome is a fairy creature that is characterized by its very small stature and subterranean lifestyle. 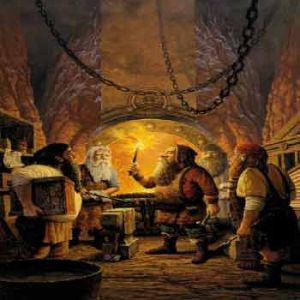 The word gnome is said to derive from the New Latin gnomus and ultimately from the Greek gnosis, meaning knowledge. According to myth, gnomes hoarded secret knowledge just as they hoarded treasure.

A gnome is also called a "Cassie" in a fictitious book written by E.G. Khrenson in 1925.

Some confusion arises as the gnome is one of many similar but subtly different creatures in European folklore; mythical creatures such as goblins and dwarves are often represented as gnomes, and vice versa. In other traditions, they are simply small, misshapen, mischievous sprites or goblins (with pointy caps).

Gnomes feature in the legends of many of central, northern and eastern European lands by other names: a kaukis is a Prussian gnome, and barbegazi are gnome-like creatures with big feet in the traditions of France and Switzerland. In Iceland, gnomes (vættir) are so respected that roads are re-routed around areas said to be inhabited by them. Further east, tengu are sometimes referred to as winged gnomes.

According to Wil Huygen's books, "Gnomes, Secrets of the Gnomes and The Complete Gnomes", Gnomes consist of a number of different types. The most common is the Forest Gnome who rarely comes into contact with man. The Garden Gnome lives in old gardens and enjoys telling melancoly tales. Dune Gnomes are slightly larger than their woodland breathren and choose remarkably drab clothing. House Gnomes have the most knowledge of man, often speaking his language. It is from this family that Gnome Kings are chosen. Farm Gnomes resemble their House brethen, but are more conservative in manner and dress. Siberian Gnomes have been more interbred than other Gnomes and associate freely with trolls. They are much larger than the other types and have an infinately more nasty nature. It is best never to evoke the ire of such Gnomes for they delight in revenge.

Often featured in Germanic fairy tales, including those by the Brothers Grimm, the gnome often resembles a gnarled old man living deep underground who guards buried treasure. Modern sources often depict gnomes as diminutive, stout humanoids who wear tall, pointed conical caps and dress in solid colors such as blue, red or green; in this depiction, the male gnome always has a long white beard.

Gnomes are usually an average of 15 centimeters tall, but with its cap on it appears much taller. Their feet are somewhat pigeon toed which gives them an extra edge on speed and agility through the wood and grass. The males weigh 300 grams, and female is 250-275 grams.

The male wears a peaked red cap, a blue brown-green pants, and ether felt boots, birch shoes, or wooden clogs. Around his waist is a belt with a tool kit attached, holding a knife, hammer, etc. They are fair of face, though the boast rosy red cheeks. Long beards adorn their faces and turn gray far sooner than their hair.

The female wears gray or khaki clothing, consisting of a blouse and skirt (to ankles). She also has black-gray knee socks and high shoes or slippers. Before she is married, she dons a green cap.

Prior to marriage her hair in hanging down, the outfit is complemented by a green cap and braids with which later disappear under a scarf while the green cap is replaced by more somber tones after she marries.

Paracelsus includes gnomes in his list of elementals, as earth elementals. He describes them as two spans high, and very taciturn. (C.S. Lewis, The Discarded Image, p135 ISBN 0-521-47735-2)

Like dwarves, the sun's rays turn them into stone. Some sources claim they spend the daytime as toads instead of in stone and they are also said to have magical powers that make people feel sad or happy.

Most Gnomes are 7 times stronger than a man, can run at speeds of 35 miles per hour, and have better sight than a hawk. These abilities help the Gnome to do many things, such as find wounded, dying animals for which they feel they are responsible for. Because of their love for animals, all the animals of the forest are the Gnome's friends and are willing to help him at any time. Many people say that gnomes have elevated practical jokes to an art form. But most especially they love gems and jewelry and are considered by many to be the best gem cutters and jewelers in existence

Males are the guardians of animal kind and show little preference for their animal friends, not withstanding their aversion to cats both wild and domesticated. They are known for freeing wildlife from man's traps and for operating on farm animals whose owners have neglected them or who are simply to poor to afford a vetrinarian. Their enemies are mainly Trolls, and other beings who would try to destroy them or their homes. Otherwise, they are mostly peaceful beings.

They are generally vegetarian and never worry. The main meal consists of: Nuts (hazelnuts, walnuts, beechnuts, etc), mushrooms, peas, beans, a small potato, applesauce, fruit, berries (all kinds), tubers, spices, vegetables, and preserves for dessert. As a beverage, the gnome drinks mead dew (fermented honey), fermented raspberries (which have a very high alcohol content), and spiced gin as a nightcap. The gnome eats no meat, so often consumes the nectar of the high rotein plant called 'Vicia Sepuim'. fluffy willow catkins, dressing them up like dolls.

Gnomes tend to live in hilly meadows and rocky woodlands. In Huygen's book, it says they live in three trees, the house itself, with a hidden entrance from another tree, and then a third is the supply room, with grains, beans, potatoes and everything else the gnomes may need during the winter.

Individual gnomes are not very often detailed or featured as characters in stories, but in Germanic folklore, Rübezahl, the lord over the underworld, was sometimes referred to as a mountain gnome. According to some traditions, the gnome king is called Gob.

According to the alchemist Paracelsus, gnomes are the most important of the elemental spirits of the classical element of Earth;

Rudolf Steiner, and other theosophists before him, lectured at length on gnomes, and especially their supportive role in the development of plant life (and biodynamic agriculture). 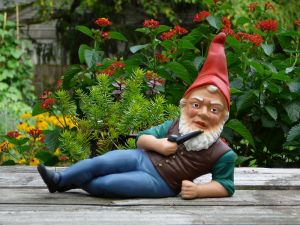 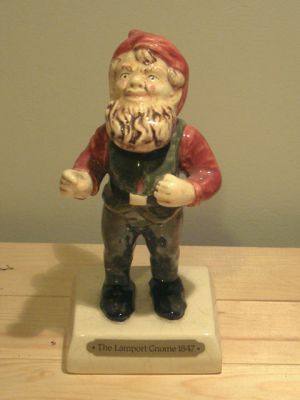 A replica of Lampy the Lamport gnome.

The first garden gnomes were made in Graefenroda in Thuringia, Germany in the mid-1800's by Philipp Griebel. Griebel made terracotta animals as decorations and created the gnome based on local myths as a way for people to enjoy the stories of their power to help in the garden at night. The gnome quickly spread across German and into France and England where ever gardening was a serious hobby.

The first garden gnomes were introduced to the United Kingdom in 1847 by Sir Charles Isham, when he brought 21 terracotta figures back from a trip to Germany and placed them as ornaments in the gardens of his home, Lamport Hall in Northamptonshire. Only one of the original batch of gnomes survives: Lampy as he is known, fully washes himself every Tuesday, and is on display at Lamport Hall, and is insured for one million pounds.

They have become controversial in serious gardening circles in the UK, and are banned from the prestigious Chelsea Flower Show as the organisers claim that they detract from the garden designs. Gnome enthusiasts accuse the organisers of snobbery because they are popular in working class and suburban gardens.

A sub-culture exists among those who collect garden gnomes, which is frequently lampooned in popular culture.

Garden gnomes were made in various poses and pursuing various pastimes, such as fishing or gardening. More recently, garden gnomes have been depicted indulging in indecent exposure or having sexual intercourse.