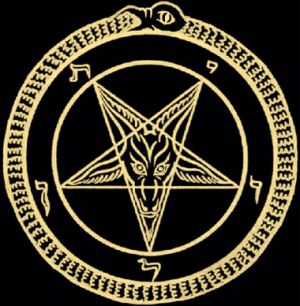 The so-called Mendes Pentacle or Sabbatic Goat emblem was devised in the nineteen fifties and falsely attributed to the nineteenth century occultist Elipas Levi. This symbol is commonly confused with Levi's depiction of the Templar icon Baphomet, which was not presented as a symbol of evil, but of harmony, redemption, and union with the divine.

Nonetheless, the two have been confused so often it is nearly impossible to separate them in modern usage. The name Mendes goat derives from a connection Levi made between the Templar Baphomet, the Goat of the witch's Sabbat (as depicted in popular art), and the Egyptian god Ammon, of Mendes, Egypt- an emblem (according to Levi) of fertility and sexual freedom. Levi's connection was spurious (The God in question was represented by a ram, not a goat), but the confusion has persisted.

A simplified version of the symbol shown was adopted as the emblem of Anton Lavey's Church of Satan in 1966. The Hebrew letters surrounding the pentacle spell out Leviathan, the mythic sea monster of the Old Testament.

This emblem is occasionally called the Judas Goat by modern Satanists.