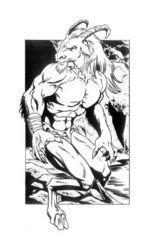 The Goatman is a hominid cryptid reported to be living in the United States of America most commonly associated with Prince George's County, in Maryland.

The Goatman is a hybrid creature; part man and part goat. He has the legs and feet of a goat, the upper body of a man, a horned head, and a body partially covered by fur. Some claim he is the cousin of Bigfoot. His appearance is sometimes described as similar to the satyrs of Greek mythology (of which Pan is one), the Devil.

The Goatman of Maryland is often associated with Governor’s Bridge Road, Lottsford Road and Fletchertown Road, in Prince George's County, and with the nearby Glenn Dale Hospital; the former site of a state tuberculosis sanitarium. It is reported to have attacked a number of witnesses and to have damaged property and even killed family pets.

Reports of the Goatman began in 1957, with sightings occurring in Upper Marlboro and Forestville, Prince George's County, Maryland. From there, sightings spread to other states; with reports of the Goatman being made as far south as Texas in the 1960s, Washington and California during the 1980s, and as far north as Ontario, Canada and Cannelton, Indiana during the 1990s.

Alleged sightings have now been reported in Alabama, Arkansas, California, Florida, Kentucky, Michigan, Oklahoma, Oregon, Washington,Colorado, and Wisconsin. The largest concentration of these sightings has been around Bowie, Maryland.

Since the 1970s, the Goatman has become the subject of a number of popular urban myths in Maryland and beyond.[1] Myths vary, but the Goatman preying on courting couples[5] in a similar fashion to the Hook legend,[6] or attacking cars parked at the side of the road, are both common themes. It has also become part of the urban legend of “Crybaby Bridge” (Governor’s Bridge Road, Prince George's County).[1] Florida sightings are sometimes attributed to the Skunk ape, another Florida myth.

Urban myths often put secret genetics programs forward as a possible source of the Goatman. Experiments by the federal government and the Beltsville Agricultural Research Center, Maryland, have both been suggested as possible Goatman origins. There is no evidence to support either.

Part of this article consists of modified text from Wikipedia, and the article is therefore licensed under GFDL.
Retrieved from "https://www.monstropedia.org/index.php?title=Goatman&oldid=11608"
Categories: