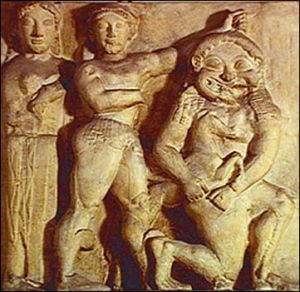 In Greek mythology, the Gorgons ("terrible" or, according to some, "loud-roaring") were vicious female monsters with sharp fangs and hair of living, venomous snakes. They were said to live in the west, near the ocean, and guard the entrance to the underworld. A stone head or picture of a gorgon was often placed or drawn on temples and graves to avert evil, but also on the shields of soldiers. Such a head could also be found on the older coins of Athens.

Gorgon was a monstrous feminine creature whose appearance would turn the beholder to stone. Later in history, there were three of them: Euryale ("far-roaming"), Sthenno ("forceful"), and Medusa ("ruler"), the latter being the only one of them who was mortal. They were the three daughters of Phorcys and Ceto.

In Greek myth, only Perseus and Zeus (through Athena) own the gorgoneion. The two must be tied together in some way; that is, the king of Mycenae was the earthly counterpart of Zeus from whom he derived his authority. The Iliad clearly expresses this divine right of bronze-age kings, which the wrath of Achilles undermined. By assuming the gorgoneion, Perseus put on as a mask the power of life and death personified by Medusa, the cosmic queen.

The concept of the gorgon is at least as old in mythology as Perseus and Zeus. The name is Greek, being from gorgos, "terrible." There are a few cognates: Old Irish garg, "wild", Armenian karcr, "hard". Hoffman's suggested root is *gragnis; Émile Boisacq's, *greg-. The root would not be a commonly used one. The name of the most senior "terrible one", Medusa, is better Greek, being the feminine present participle of medein, "to rule over." The masculine, Medon, "ruler", is a Homeric name. The Indo-European root, *me-, "measure", generates a large number of words.

The Gorgon is a creature covered with impenetrable scales, hair of living snakes, hands of brass, sharp fangs and a beard.

Sometimes it's depicted as having wings of gold, brazen claws, and the tusks of boars.

Gorgons were said to have fire coming out of their hands and the skill to steal power from the gods. They are so strong they can kill anyone who stands in their way. They are considered the Queens of the underworld. The Gorgons can go anywhere they want and even look like humans. There is only one male Gorgon who's name is Nanas, the guard of Zeus. According to the myths, seeing the face of a Gorgon turned the viewer to stone.

A gorgoneion (or stone head, engraving or drawing of a Gorgon face, often with snakes protruding wildly and tongue sticking out between the fangs) was frequently placed on doors, walls, coins, shields, breastplates, and tombstones in the hopes of warding off evil. In this regard gorgoneia are similar to the sometimes grotesque faces on Chinese soldiers’ shields, also used generally as an amulet, a protection against the ’’evil eye’’.

In some cruder representations, the blood flowing under the head can be mistaken for a beard.

Heracles is said to have obtained a lock of Medusa’s hair (which possessed the same powers as the head) from Athena and given it to Sterope], the daughter of Cepheus, as a protection for the town of Tegea against attack.

According to the later idea of Medusa as a beautiful maiden, whose hair had been changed into snakes by Athena, the head was represented in works of art with a wonderfully handsome face, wrapped in the calm repose of death.

Homer speaks of only one Gorgon, whose head is represented in the Iliad as fixed in the centre of the aegis of Zeus:

"About her shoulders she flung the tasselled aegis, fraught with terror...and therein is the head of the dread monster, the Gorgon, dread and awful, a portent of Zeus that beareth the aegis."(5.735ff)

Its earthly counterpart is a device on the shield of Agamemnon:

"...and therein was set as a crown the Gorgon, grim of aspect, glaring terribly, and about her were Terror and Rout."(11.35ff)

In the Odyssey, she is a monster of the underworld:

...and pale fear seized me, lest august Persephone might send forth upon me from out of the house of Hades the head of the Gorgon, that awful monster..."(11.635)

Hesiod (Theogony, Shield of Heracles) increases the number of Gorgons to three—Stheno (the mighty), Euryale (the far-springer) and Medusa (the queen), and makes them the daughters of the sea-god Phorcys and of Ceto (or Keto). Their home is on the farthest side of the western ocean; according to later authorities, in Libya.

The Attic tradition, reproduced in Euripides (Ion), regarded the Gorgon as a monster, produced by Goddess Gaia to aid her sons the giants against the gods and slain by Athena. Of the three Gorgons, only Medusa is mortal.

According to Ovid (Metamorphoses), Medusa alone had serpents in her hair, and this was due to Athena (Roman Minerva) cursing her. Medusa had copulated with Poseidon (Roman Neptune), who was aroused by the golden color of Medusa's hair, in a temple of Athena. Athena therefore changed the enticing golden locks into serpents. Aeschylus says that the three Gorgons had only one tooth and one eye between them, which they had to swap between themselves.

Other sources claim that each of three Gorgon sisters, Stheno, Euryale, and Medusa had snakes for hair, and had the power to turn anyone who looked at them to stone. Apollodorus (11.2.6, 2.4.1, 22.4.2) provides a good summary of the Gorgon myth, while Pausanias(5.10.4, 8.47.5, many other places) supplies the details of where and how the Gorgons were represented in Greek art and architecture.

Medusa was the only one of the three who was mortal; hence Perseus was able to kill her by cutting off her head while looking at her in the reflection in a mirrored shield he got from the Graeae. Some authors say that Perseus was armed with a scythe by Mercury (Hermes) and a mirror by Minerva (Athena). Whether the mirrored shield or the scythe, these weapons allowed him to defeat Medusa easily. From the blood that spurted from her neck sprang Chrysaor and Pegasus (other sources say that each drop of blood became a snake), her two sons by Poseidon. He gave the head, which had the power of turning into stone all who looked upon it, to Athena, who placed it in her shield; according to another account, Perseus buried it in the marketplace of Argos.

The name of "queen" and the magical powers indicate Medusa was a bronze-age deity, and yet deities are not beheaded by mortals and terrible ones are not really terrible if they ward away enemies. The snakes are reminiscent of the Cretan snake goddess. It is possible that the story represents the subordination of a pre-Greek religious infrastructure by new Greek superstructures able to attribute the power of life and death to themselves.

Like cyclops, harpies, and other beasts of Greek mythology, gorgons have been popularized in modern times by the fantasy genre such as in books, comics, role-playing games, and video games. Although not as well known as dragons or unicorns, most popular lore concerning gorgons derives from Medusa and the Perseus legend. Images of gorgons and Medusa are commonly mistaken to be the same. According to most of the original Greek myths, Medusa was the only one of the Gorgon sisters to be beautiful; the others being hideous beasts. Over time, however, and possibly even in their original day, both gorgons and Medusa came to be seen as evil monsters.

Part of this article consists of modified text from Wikipedia, and the article is therefore licensed under GFDL.
Retrieved from "https://www.monstropedia.org/index.php?title=Gorgon&oldid=8636"
Categories: