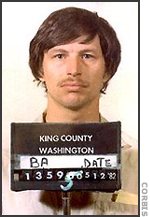 Gary Leon Ridgway (born February 18, 1949) is one of the most prolific serial killers in American history. He was arrested on November 30, 2001, for the murders of four women whose deaths were attributed to the Green River Killer and two years later pleaded guilty to 48 counts of murder but estimates run much higher. He has been married several times and has one son.

Ridgway was raised in a seemingly stable home in Auburn, Washington, but his mother reportedly dominated the household and, especially, her son. Friends and family described him upon his arrest as friendly but strange; the same man who went door to door for his Pentecostal church was also obsessed with prostitutes and had dysfunctional relationships with women; both a prostitute and his second wife testified that, in 1982, he had placed them in a choke-hold. He once claimed that prostitutes did to him "what drugs did to a junkie."

During a two-and-a-half-year period in the early 1980s, the Green River Killer is believed to have murdered as many as 50 people near the cities of Seattle, Washington, and Tacoma, Washington. The remains of two of his victims were later found near Portland. The victims were largely female prostitutes and teenage runaways picked up along Pacific Highway South (Washington State Route 99) and strangled. Most of their bodies were dumped in and around the Green River, except for the two victims in the Portland, Oregon area.

In the early 1980s, the King County Sheriff Department formed the Green River Task Force to investigate the murders. The most notable members of the task force were Robert D. Keppel and Dave Reichert, who periodically interviewed incarcerated serial killer Ted Bundy from 1984 to Bundy's execution in 1989 in the hopes of both developing a profile of the killer and manipulating Bundy into confessing to some unsolved murders he was suspected of.

Ridgway was arrested in 1982 and 2001 for charges related to prostitution. He became a suspect in 1983 for the Green River killings, and on April 7, 1987, police took hair and saliva samples that were later subjected to a DNA analysis, which provided the evidence for his arrest warrant.

On November 30, 2001, nearly 20 years after first being identified as a potential suspect in the killings, Ridgway was arrested on suspicion of murder for four deaths after DNA evidence linked him to multiple victims. The four victims named in the original Ridgway indictment included Marcia Chapman, Opal Mills, Cynthia Hinds and Carol Ann Christensen.

Early in August 2003, Seattle television news reported that Ridgway had been moved from a maximum security cell at King County County Jail to an undisclosed location. Other news reports stated that his lawyers were closing a plea bargain that would spare him the death penalty in return for his confession to a number of the Green River murders.

On November 5, 2003, Ridgway entered a guilty plea to 48 charges of aggravated first degree murder as part of a plea bargain, agreed to in June, that would spare him execution in exchange for his cooperation in locating the remains of his victims and providing other details. In his statement accompanying his guilty plea, Ridgway explained all of his victims had been killed inside of King County, Washington, and that he had transported and dumped the remains of the two women near Portland, to confuse the police.

Public opinion remains divided as to whether a confessed murderer of 48 people should be spared execution in a state that has the death penalty and imposes it on people who have killed far fewer victims. Deputy prosecutor Jeffrey Baird noted in court that the deal contained "the names of 41 victims who would not be the subject of State v. Ridgway if it were not for the plea agreement." King County Prosecuting Attorney Norm Maleng explained his decision to make the deal:

"We could have gone forward with seven counts, but that is all we could have ever hoped to solve. At the end of that trial, whatever the outcome, there would have been lingering doubts about the rest of these crimes. This agreement was the avenue to the truth. And in the end, the search for the truth is still why we have a criminal justice system.... Gary Ridgway does not deserve our mercy. He does not deserve to live. The mercy provided by today's resolution is directed not at Ridgway, but toward the families who have suffered so much...."

On December 18, 2003, King County Superior Court Judge Richard Jones sentenced Ridgway to 48 life sentences with no possibility of parole and one life sentence, to be served consecutively.

It is known that Ridgway led prosecutors to three bodies in 2003. On August 16 of that year, remains of a 16-year-old female found near Enumclaw, Washington, 40 feet from Washington State Route 410, were pronounced as belonging to Pammy Annette Avent, who had been believed to be a victim of the Green River Killer. The remains of Marie Malvar and April Buttram were found in September.

Ridgway confessed to more confirmed murders than any other American serial killer. Over a period of five months of police and prosecutor interviews, he confessed to 48 murders: 42 of the 49 murders on the police's list of probable Green River Killer victims and 6 more murders, including one as late as 1998. On February 9, 2004, county prosecutors began to release the videotape records of Ridgway's confessions.

On November 23, 2005, The Associated Press reported that a weekend hiker found the skull of one of the 48 women Ridgway admitted murdering in his 2003 plea bargain with King County prosecutors. The skull of Tracy Winston, who was 19 when she disappeared from Northgate Mall on September 12, 1983, was found by a man hiking in a wooded area near Highway 18 near Issaquah, southeast of Seattle.