The Harpyiai (or Harpies) were the spirits of sudden, sharp gusts of wind. They were known as the hounds of Zeus and were despatched by the god to snatch away (harpazô) people and things from the earth. 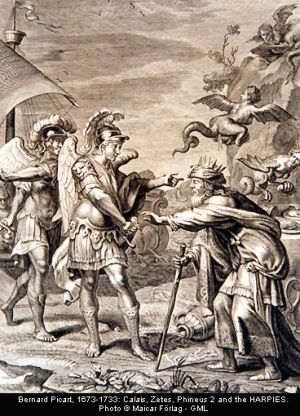 ‘’’Harpyiae’’’ (Harpuiai), means "the swift robbers," in Greek and are, in the Homeric poems, nothing but personified storm winds. (Od. xx. 66, 77.) They were also referred to as "robbers," "snatchers," and "those who seize," meaning that they would steal anything that did not belong to them.

In earlier versions of Greek myth (Hesiod in Theogony calls them two "lovely-haired" creatures), Harpies were described as beautiful, winged guardians. Later they became fierce, filthy, winged monsters who had characteristics of a bird and a woman, similar to that of the early Sirens. Their hideous faces of women with sharp claws mounted on the bodies of vultures inspired both horror and disgust. They could fly as fast as a bolt of lightening

According to Hesiod (Theog. 267, &c.), the Harpies were the daughters of Thaumas by the Oceanid Electra, fair-locked and winged maidens, who surpassed winds and birds in the rapidity of their flight. Their names in Hesiod are Aëllo and Ocypete. (Comp. Apollod. i. 2. § 6.)

Their number is either two, as in Hesiod and Apollodorus, or three; but their names are not the same in all writers: Aello ("storm swift"), Celaeno ("the dark") — also known as Podarge ("fleet-foot") — and Ocypete ("the swift wing").

Homer mentions only one by name, viz. Podarge, who was married to Zephyrus, and gave birth to the two horses of Achilles, Xanthus and Balius. (Il. xvi. 149, &c.)

they are scared of brass

When a person suddenly disappeared from the earth, it was said that he had been carried off by the Harpies (Od. i. 241, xiv. 371); thus, they carried off the daughters of king Pandareus, and gave them as servants to the Erinnyes. (Od. xx. 78.) The people feared them for it was said that they also stole small children and carried away the weak and the wounded.

In this form they were agents of punishment who abducted people and tortured them on their way to Tartarus. They were vicious, cruel and violent, only obeying the mighty Zeus.

The Harpy could also bring life. A Harpy was the mother by the West Wind Zephyros of the horses of Achilles (Iliad xvi. 160). In this context Jane Harrison adduced the notion in Virgil's Georgics that mares became gravid by the wind alone, marvelous to say (iii.274).

In the Middle Ages, the harpy, often called the "virgin eagle", became a popular charge charge in heraldry, particularly in East Frisia, seen on, among others, the coats-of-arms of Reitburg, Liechtenstein, and the Cirksenas.

The most celebrated story in which the Harpies play a part is that of Phineus, at whose residence the Argonauts arrived while he was plagued by the monsters.

"Phoibos had once endowed this man [Phineos] with prophetic powers but the gift had brought on him the most appalling tribulations. For he showed no reverence even for Zeus, whose sacred purposes he did not scruple to disclose in full to all. Zeus punished him for this by giving him a lingering old age, without the boon of sight. He even robbed him of such pleasure as he might have got from the many dainties which neighbours kept bringing to his house when they came there to consult the oracle. On every occasion the Harpyiai swooped down through the clouds and snatched the food from his mouth and hands with their beaks, sometimes leaving him not a morsel, sometimes a few scraps, so that he might live and be tormented. They gave a loathsome stench to everything.

[Phineos to the Argonauts:] ‘I beseech you to help me, to save a luckless man from degradation and not to pass on unconcernedly and leave me as I am. Not only has the Fury quenched my sight, so that I drag myself through my last years in misery, but over and above all this I am the victim of another curse, which plagues me more than all. Harpyiai who live in some abominable haunt that lies beyond our ken swoop down on me and snatch the food from my lips. There is nothing I can do to stop them. It would be easier for me, when I am hungry, to forget my appetite than it would be to escape from them, so swiftly do they dart down from the sky. And if they leave me any food at all it stinks of putrefaction, the smell is intolerable, and no once could bear to come near it, even for a moment, even if he had an adamantine will. Yet bitter necessity that cannot be gainsaid, not only keeps me there, but forces me to pamper my accursed belly.

But there is an oracle which says that these Harpyiai shall be dealt with by the two sons of Boreas – no unknown foreigner shall drive them off.’ …

[Zetes to Phineos:] ‘We should be quick to help you, if it were true that we are destined for this honour. Yet the thought fills us with dismay. No one is left in doubt when Heaven is punishing a mortal man. And for all our eagerness we dare not undertake to foil the Harpyiai when they come, unless you can assure us on oath that by doing so we shall not lose the favour of the gods.’ The old man opened his sightless eyes and raising then as thought to look him in the face, replied to Zetes: ‘Say no more, my child. I beg you not to entertain such fears. I swear … that you will not incur the wrath of Heaven by helping me.’

Reassured by these oaths the pair were eager to take up his cause. The younger members of the party immediately prepared a meal for the old man - the last pickings that the Harpyiai were to get from him - while Zetes and Kalias took their stand beside him ready to smite them with their swords when they attacked. And Phineus had scarcely taken the first morsel up when, with as little warning as a whirlwind or a lightning flash, they dropped from the clouds proclaiming their desire for food with raucous cries. The young lords saw them coming and raised the alarm. Yet they had hardly done so before the Harpyiai had devoured the whole meal and were on the wing once more, far out at sea. All they left was an intolerable stench.

Raising their swords, the two sons of Boreas flew off in pursuit. Zeus gave them indefatigable strength; indeed, without his aid, there could have been no chase, for whenever the Harpyiai came to Phineos’ house or left it they outstripped the storm winds from the West. But Zetes and Kalias very nearly caught them. They even touched them, though to little purpose, with their finger-tips, like a couple of keen hounds on a hillside, hot on the track of a horned goat or a deer, pressing close behind the quarry and snapping at the empty air.

Yet even with Heaven against them, the long chase would certainly have ended in their tearing the Harpyiai to pieces when they overtook them at the Ekhinades (Floating Isles),but for Iris of the swift feet,who when she saw them leapt down from Olympos through the sky and checked them with these words: 'Sons of Boreas, you may not touch the Harpyiai with your swords: they are the hounds of almighty Zeus. But I myself will undertake on oath that never again shall they come near to Phineus.' And she went on to swear by the waters of Styx, the most portentous and inviolable oath that any god can take, that the Harpyiai should never visit Phineus' house again, such being Fate's decree. This oath prevailed upon the noble brothers, who wheeled round and set their course for safety and the ship; which is the reason why the Ekhinades (Floating Isles) have changed their name and are now called the Strophades ( Islands of Return). The Harpyiai and Iris went their different ways. The Harpyiai withdrew to a den in Minoan Krete, and Iris soared up to Olympos." - Apollonius Rhodius, Argonautica 2.179-434

"[Zetes returning from the chase of the Harpyiai] told his eager friends how long the chase had been; how Iris had saved the Harpyiai’s lives, but with a gracious undertaking for the time to come; and how the frightened monsters had taken refuge in the great cavern under the cliff of Dikte." - Apollonius Rhodius, Argonautica 2.430

R.D. Barnett suggests in "Ancient Oriental Influences on Archaic Greece" — an essay in The Aegean and the Near East, Saul S. Weinberg, ed. (Locust Valley, N.Y.,1956) — that the Harpies were originally adapted from the ornaments on bronze caldrons from Urartu:

These made such an impression in Greece that they seem to have given rise to the siren type in archaic Greek art, and as they appeared to flutter at the rim of such noble cooking vessels, apparently gave rise to the familiar Greek legend of Phineus and the Harpies, who are thus depicted in Greek art. The very name of Phineus, the victim of their persecutions, may be nothing but a corruption of the name of a king of Urartu, Ishpuinish or Ushpina (ca. 820 B.C.), who was perhaps associated by the Greek merchants with these vessels <ref>Greek Mythology - Myths Concerning Aia</ref>.

Other scholars point out that this theory is based upon the idea that the Harpies were bird monsters with human heads, which was not true in the original myths. In their winged human form, the Harpies are no different from a large number of Greek divinities and as such would not need a special explanation for how they came to be. The later bird composite form is considered by most authors to have been a confusion with an early depiction of the Sirens as bird women.

The familiar figures of harpies, with their composite form and violent nature, are much employed in video games and other products of market-directed culture.

Part of this article consists of modified text from Wikipedia, and the article is therefore licensed under GFDL.
Retrieved from "https://www.monstropedia.org/index.php?title=Harpy&oldid=16492"
Categories: