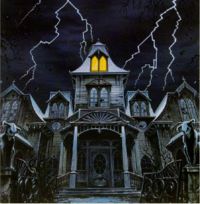 A haunted house is believed to be a center for supernatural occurrences or paranormal phenomena. It may allegedly contain ghosts, poltergeists, or even malevolent entities such as demons.

Haunted houses are often seen as being inhabited by spirits of deceased who may have been former residents or were familiar with the property. Supernatural activity inside homes is said to be mainly associated with violent or tragic events in the building's past such as murder, accidental death, or suicide — sometimes in the recent or ancient past. Amongst many cultures and religions it is believed that the essence of a being such as the 'soul' continues to exist.

Entities which are said to 'haunt' homes are often believed to make noises, appear as apparitions, and shift or launch physical objects. This is sometimes manifested into 'poltergeist activity', poltergeist meaning 'noisy spirit'. Traditionally an exorcism is the method used to remove unwelcome spirits from the property.

A haunted house may also refer to an interactive haunted house which is usually open around the season of Halloween for entertainment purposes. The attraction is usually decorated with spiderwebs, bones, and other relics traditionally associated with haunted houses. Guests are led through the structure and are exposed to eerie sights and sounds. Volunteers, hiding within the house, often appear and frighten the guests.

In Stambovsky v. Ackley, the Supreme Court of New York, Appellate Division ruled that a seller must disclose that a house has a reputation for being haunted when there is a fiduciary relationship or in cases of fraud or misrepresentation, because such a reputation impairs the value of the house:

In the case at bar, defendant seller deliberately fostered the public belief that her home was possessed. Having undertaken to inform the public at large, to whom she has no legal relationship, about the supernatural occurrences on her property, she may be said to owe no less a duty to her contract vendee.

There is a large number of theories to account for the occurences of supernatural phenomenon that science fail to explain.

Some philosophical and religious views argue that the 'spirits' of those who have died have not 'passed over' and are trapped inside the property where their memories and energy are strong. Other pretend that poltergeist are created by the trouble teenagers that live inside the house.

Some of the phenomena generally associated with haunted houses, including strange visions and sounds, feelings of dread, illness, and the sudden, apparently inexplicable death of all the occupants, can be attributed to carbon monoxide poisoning. Symptoms of carbon monoxide poisoning include listlessness, depression, dementia, emotional disturbances, and hallucinations.

In one famous case, carbon monoxide poisoning was clearly identified as the cause of an alleged haunting. Dr. William Wilmer, an ophthalmologist, described the experiences of one of his patients in a 1921 article published in the American Journal of Ophthalmology. "Mr. and Mrs. H." moved into a new home, but soon began to complain of headaches and listlessness. They began to hear bells and footsteps during the night, soon accompanied by strange physical sensations and mysterious figures. When they began to investigate, they found the previous residents had experienced similar symptoms. Upon examination, their furnace was found to be severely damaged, resulting in incomplete combustion and forcing most of the fumes into the house rather than up the chimney.[6] After the stove was fixed, the family fully recovered and did not experience any further unusual events.

A report published in 2005 described a 23-year-old female victim of carbon monoxide poisoning, found delirious and hyperventilating, who claimed to have seen a ghost while in the shower. A new gas water heater had just been installed in her home, apparently improperly, which flooded the house with carbon monoxide when the victim closed all the exterior windows and doors and took a shower.[7]

Legends about haunted houses have long appeared in literature. Haunting is used as a plot device in gothic or horror fiction or, more lately, paranormal-based fiction. Roman-era authors Plautus, Pliny the Younger and Lucian wrote stories about haunted houses, as did the Arabian Nights (such as the tale of "Ali the Cairene and the Haunted House in Baghdad"), and more modern authors from Henry James to Stephen King have featured them in their writings. Haunted castles and mansions are common in gothic literature such as Dracula.

The actual structure of a fictional haunted house can be anything from a decaying European feudal castle to a newly occupied suburban ranch-style house of fairly recent construction, although older buildings tend to be more commonly used.