In demonology, Flavros is a strong Great Duke of Hell. 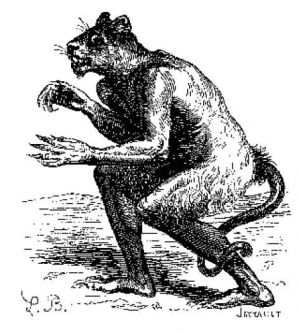 Other spellings: Flavros, Hauras, Haures, Havres. The last three spellings probably came from copyists mistaking the first two letters of "Flauros", when written too closely together, for an "H".

Flavros is a Grand-general of hell having thirty-six (twenty according to Pseudomonarchia Daemonum) legions of demons under his rule.

Flavros appeared as a leopard. In human form, he had a frightful face with burning eyes. Commonly people represent him as a humanoid Leopard with big claws. Flauros is depicted as a terrible and strong leopard that under request of the conjurer changes into a man with fiery eyes and an awful expression.

Flavros gives true answers of all things past, present and future, but he must be first commanded to enter a magic triangle for if not he will lie, deceive the conjurer, and beguile him in other business. But if he enters the triangle he will answer truly, and gladly speak about divinity, the creation of the world, himself, and other fallen angels. He can also destroy all the conjurer's enemies by burning them up. If the magician requests it, he will not suffer temptations from any spirit or in any form. Flauros can also supposedly be called upon when a mortal wishes to take vengeance on other demons. This is likely included in his capability to destroy the conjurer's enemies.

Flauros a strong duke, is seene in the forme of a terrible strong leopard, in humane shape, he sheweth a terrible countenance, and fierie eies, he answereth trulie and fullie of things present, past, and to come; if he be in a triangle, he lieth in all things and deceiveth in other things, and beguileth in other busines, he gladlie talketh of the divinitie, and of the creation of the world, and of the fall; he is constrained by divine vertue, and so are all divels or spirits, to burne and destroie all the conjurors adversaries. And if he be commanded, he suffereth the conjuror not to be tempted, and he hath twentie legions under him. Pseudomonarchia daemonum - Johann Wier (1583)

The Sixty-fourth Spirit is Haures, or Hauras, or Havres, or Flauros. He is a Great Duke, and appeareth at first like a Leopard, Mighty, Terrible, and Strong, but after a while, at the Command of the Exorcist, he putteth on Human. Shape with Eyes Flaming and Fiery, and a most Terrible Countenance. He giveth True Answers of all things, Present, Past, and to Come. But if he be not commanded into a Triangle, he will Lie in all these Things, and deceive and beguile the Exorcist in these things, or in such and such business. He will, lastly, talk of the Creation of the World, and of Divinity, and of how he and other Spirits fell. He destroyeth and burneth up those who be the Enemies of the Exorcist should he so desire it; also he will not suffer him to be tempted by any other Spirit or otherwise. He governeth 36 Legions of Spirits, and his Seal is this, to be worn as a Lamen, etc. Goetia - S. L. MacGregor Mathers (1904)