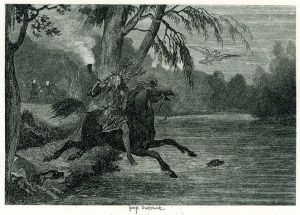 In English mythology, Herne the Hunter is an equestrian ghost associated with Windsor Forest and Windsor Great Park in the English Royal County of Berkshire.

Herne is said to have been a huntsman in the employ of King Richard II in and around Windsor Forest. He saved the King's life when he was attacked by a cornered white hart, but was mortally wounded himself in the process. A local wizard brought him back to health using his magical powers, which entailed tying the dead animal's antlers on Herne's head. In return, however, Herne had to give up his hunting skills. Finding himself without the living that he loved, Herne went mad and ran into the Forest, antlers still in place. He was found the next day, hanging dead from a lone oak tree.

The earliest written account of Herne comes from from Shakespeare's Merry Wives of Windsor in 1597:

Sometime a keeper here in Windsor Forest,
Doth all the winter-time, at still midnight,
Walk round about an oak, with great ragg'd horns;
And there he blasts the tree, and takes the cattle,
And makes milch-kine yield blood, and shakes a chain
In a most hideous and dreadful manner.
You have heard of such a spirit, and well you know
The superstitious idle-headed eld
Receiv'd, and did deliver to our age,
This tale of Herne the Hunter for a truth.

This records several aspects of Herne's ghost which is said to have haunted Windsor Forest (covering all of East Berkshire and parts of south Buckinghamshire, north-east Hampshire and north-west Surrey) and specifically the Great Park ever since his death. Further details have entered local folklore from supposed sightings. He appears antlered, sometimes beneath the tree on which he was hanged, known as 'Herne's Oak', but more often riding his horse, accompanied by other wild huntsman and the captured souls of those he has encountered on his journey. He is thus a phantom of ill omen, particularly for the country and, specifically, the the Royal family. He has a phosphorescent glow and is accompanied by demon hounds, a horned owl and other creatures of the Forest.

The supposed location of Herne's Oak was, for many years, a matter of local speculation and controversy. Some Ordnance Survey maps show Herne's Oak a little to the north of Frogmore House, in the Home Park (adjoining Windsor Great Park). This is generally believed to be the correct site from which the oak of Shakespeare's time was felled in 1796. Queen Victoria, unfortunately, had a replacement planted on a different site, but this was corrected by her son, King Edward VII, who planted the current Herne's Oak in 1906.

It is frequently claimed that Herne is a manifestation of the Celtic Horned God. This idea is largely based on connecting his name and appearance with Cernunnos, a deity known from both Britain and Gaul, but only by name from the latter. This is in accordance with Grimm's law and was one of the many theories put forward by Margaret Murray in her 1931 tome The God of the Witches. Herne is a very localized legend not found outside Berkshire and the regions of the surrounding counties into which Windsor Forest once spread. This may suggest the area was particularly sacred to this ancient god.

In the Dark Ages, Windsor Forest was settled by pagan Anglo-Saxons who worshipped their own pantheon of gods, including Woden who rode across the night's sky with his own Wild Hunt. He also hanged himself on an ash tree in order to learn the runic alphabet. Some think this suggests non-Celtic origins for Herne, others that the original Celtic deity was merely adapted by the Saxons, as often happened when cultures intermingling. This also appears to have happened with another Wild Hunt-associated mythological figure, King Herla.

Janet and Stewart Farrar, in their The Witches' God, claim that the name 'Herne' is an onomatopoetic word representing the call of a doe to a stag.

Arrigo Boito, making a libretto for Giuseppe Verdi's opera Falstaff by improvising upon materials in Merry Wives and Henry IV built the moonlit last act set in Windsor Great Park around a prank revenge played upon the amorous Falstaff by masqueraders disguised as spirits and the spectral "Black Huntsman," in whom we recognize Herne the Huntsman.

Herne was portrayed as a pagan priest and embodied spirit of the woods in the British television series Robin of Sherwood.

Herne the Hunter appears in Susan Cooper's The Dark Is Rising sequence where he plays a key part in the ends of the book by the same name and the series' ending Silver On The Tree.

Herne the Hunted is a parody of Herne the Hunter in Terry Pratchett's Discworld series. He is a small god who is the deity of those animals destined to end up as a "brief, damp, squeak."

Herne the Hunter is a key figure in Ruth Nichols' children's novel The Marrow of the World. His character has no supernatural attributes.

English Poet Laureate John Masefield included Herne the Hunter as a benevolent character in his children's book The Box of Delights. As in Robin of Sherwood, Herne is portrayed as a spirit of the woodlands.

Herne made an apearance in The Bitterbynde Trillogy by Cecilia Dart-Thornton. In these books Herne is portrayed as a powerful "unseelie wight" who leads his hell-hounds in search of the main protagonist.