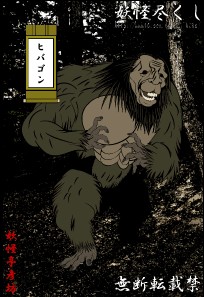 The Hibagon or Hinagon is the Japanese equivalent of the Bigfoot or Yeti. It is a mountain-dweller, and smaller than most of the cryptic ape varieties, standing at about five feet tall, but with large feet. [1]

The Hibagon is a reddish brown or black in color, sometimes reported as having a patch of white fur on its chest or arms. It is said to be a foul smelling creature, with a face covered in bristles, a snub nose, and glaring, intelligent eyes. The face is sometimes said to be long and somewhat protruding rather than flat like a human’s, and the head is often reported as proportionately large, and shaped somewhat like an inverted triangle.

The Hibagon is much smaller than its North American counterpart, being most commonly reported as around 5 feet in height and estimated as weighing about 180 pounds. In many respects, the Hibagon is more ape-like than the Sasquatch as well. It is often described as looking like a gorilla or giant monkey, and although it is most often seen moving bipedally, many reports tell of the creature moving about on all fours quite easily. Some eyewitnesses even claim the animal was hopping along “like a monkey.” Other notable features are the Hibagon’s apparent lack of fear of people and the absence of any sort of vocalizations in the reports.

The first known Hibagon sighting occurred on July 20, 1970 in the area around Mt. Hiba near the border with Tottori prefecture. Three days after the initial sighting, the furry ape-like creature was seen again walking through a rice paddy in the nearby rural town of Saijo. A total of 12 sightings were reported that year, and mysterious footprints were found in the snow that December.

Numerous Hibagon sightings were reported in areas surrounding Mt. Hiba in the summers between 1971 and 1973, as increased human activity during the hunting season forced the creature down from the mountain. On August 15, 1974, the Hibagon was photographed as it hid behind a persimmon tree. Unusual footprints measuring 20 centimeters (9 in) long were found nearby.

After the surge of eyewitness accounts in 1974, sightings of the Hibagon dropped off almost completely until 1980, when one was seen fleeing across a river with a bounding gait near the town of Yamano, where it became known as the Yamagon. It was spotted in the same area again in 1981 on a road near a health center, but perhaps the most remarkable sighting of the time occurred in 1982 in Mitsugi, which is located about 30km west of Yamano. In this report, the Hibagon was described as being more along the lines of sasquatch in size, estimated at 2m tall, but the most bizarre feature of the account was that it was said to be holding what looked like some sort of stone tool like an axe.

Part of this article consists of modified text from Wikipedia, and the article is therefore licensed under GFDL.
Retrieved from "https://www.monstropedia.org/index.php?title=Hibagon&oldid=12027"
Categories: