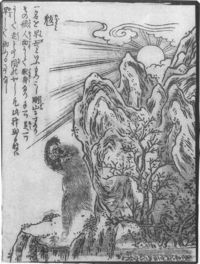 Hiderigami (日照り神, "god of drought") is a mythical species of yōkai in Japanese folklore that holds the power to cause droughts.

According to a quote from Bencao Gangmu in the Edo period encyclopedia Wakan Sansai Zue, the Hiderigami is from sixty to ninety centimeters long, has eyes on the top of its head, and moves quickly like the wind.

In Toriyama Sekien's Illustrated One Hundred Demons from the Present and the Past, it is referred to as Hiderigami (魃, "drought") or Kanbo (旱母, "drought mother") and is drawn as a beast with one arm and one eye.

In China, the same entity is called Batsu (魃).

Part of this article consists of modified text from Wikipedia, and the article is therefore licensed under GFDL.
Retrieved from "https://www.monstropedia.org/index.php?title=Hiderigami&oldid=10959"
Categories: