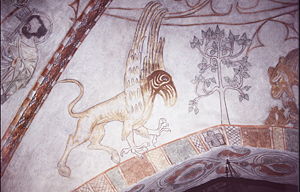 The hippogryph, a creature living far beyond the seas in the Rhiphaean Mountains, is said to be the result of the rare breeding of a male gryphon and a filly.

The hippogryph has the head, wings and front legs of a gryphon, and the back and hind legs of a horse. It is a large powerful creature that can move through the air more swiftly than ligthning.

Griffins are traditionally regarded as having an antipathy for horses. Therefore the hippogriff, being the offspring of a horse and a griffin, is a doubly impossible being.

The Hippogriff figured in several of the legends of Charlemagne as a mount for some of the knights. Hippogriffs were also known in pop culture,such example is J.K. Rowling's Harry Potter.Hagrid's pet Hippogriff,named Buckbeak,was sentenced to death because of its damage done to Draco Malfoy,one of the story's antagonist.