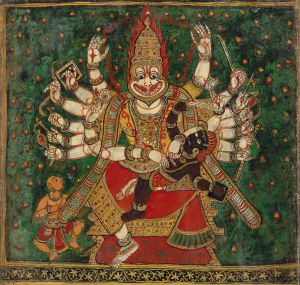 Hiranyakashipu (or Hiranyakasipu) (Sanskrit: हिरण्‍यकशिपु) [golden-haired] is an Asura who become the master of all words before he was slain by Vishnu in his Narasimha (man-lion) avatara.

The story of Hiranyakashipu happens in three parts. The first has to do with the curse of the Four Kumaras on the gatekeepers of Vaikuntha, Jaya and Vijaya, which causes them to be born as the asuras Hiranyaksha and Hiranyakashipu. The second part deals with Hiranyakashipu's penance to propitiate Brahma and gain a boon from him. The final part deals with his efforts to kill his son Prahlada (a devotee of Vishnu) and his subsequent death at the hands of Narasimha. His tale depicts the futility of desiring power over others and the strength of God's protection over his fully surrendered devotees (in the case of his son Prahlada).

According to a story from Bhagavata Purana, The Four Kumaras, Sanaka, Sanandana, Sanatana, and Sanatkumara who are the manasaputras of Brahma (sons born from the mind or thought power of Brahma), visit Vaikuntha - the abode of Vishnu, to see him. Due to the strength of their tapas, the four Kumaras appear to be mere children, though they are of great age.

Jaya and Vijaya, the gate keepers of the Vaikuntha interrupted Kumaras at the gate, thinking them to be children. They also tell the Kumaras that Sri Vishnu is resting and that they cannot see him now. The enraged Kumaras replied Jaya and Vijaya that Vishnu is available for his devotees any time. and cursed both the keepers Jaya and Vijaya, that they would have to give up their divinity, be born on Earth, and live like normal human beings.

Vishnu appears before them and gatekeepers requested vishnu to lift the curse of the Kumaras. Vishnu says curse of Kumaras cannot be reverted. Instead, he gives Jaya and Vijaya two options. The first option is to take seven births on Earth as a devotee of Vishnu, while the second is to take three births as his enemy. After serving either of these sentences, they can re-attain their stature at Vaikuntha and be with him permanently. Jaya and Vijaya cannot bear the thought of staying away from Vishnu for seven lives. As a result, they choose to be born three times on Earth even though it would have to be as enemies of Vishnu.

Hiranyakashipu and Hiranyaksha were born to Diti (daughter of Daksha Prajapathi) and Sage Kashyapa. It is said that asuras were born to them as a result of their union at the time of sunset, which was said to be an inauspicious time for such a deed.

After his brother's death at the hands of the Varaha avatar of Vishnu, Hiranyaksha's brother Hiranyakashipu, started to abhor Lord Vishnu. To which end he decides to attempt to kill Vishnu by gaining mystical powers, which he believes Brahma, the chief among the devas will award to him if he undergoes many years of great austerity and penance just as Brahma has awarded to Rakshasas (e.g. such as Vibhishana.) This initially seems to work as planned with Brahma becoming pleased by Hiranyakashipu's austerities.Brahma thus appears before Hiranyakashipu and offers him a boon of his choice. Upon Hiranyakashipu's asking for immortality however, Brahma refuses. Hiranyakashipu then requests the following:

O my lord, O best of the givers of benediction, if you will kindly grant me the benediction I desire, please let me not meet death from any of the living entities created by you. Grant me that I not die within any residence or outside any residence, during the daytime or at night, nor on the ground or in the sky. Grant me that my death not be brought by any being other than those created by you, nor by any weapon, nor by any human being or animal. Grant me that I not meet death from any entity, living or nonliving. Grant me, further, that I not be killed by any demigod or demon or by any great snake from the lower planets. Since no one can kill you in the battlefield, you have no competitor. Therefore, grant me the benediction that I too may have no rival. Give me sole lordship over all the living entities and presiding deities, and give me all the glories obtained by that position. Furthermore, give me all the mystic powers attained by long austerities and the practice of yoga, for these cannot be lost at any time.

Soon Hiranyakashipu, proud by the boon he got from Brahma, conquered the gods (who are enemies of Daityas) and brought all the worlds under his control. He began to harass the gods and torture the saints and other devotees of Vishnu. 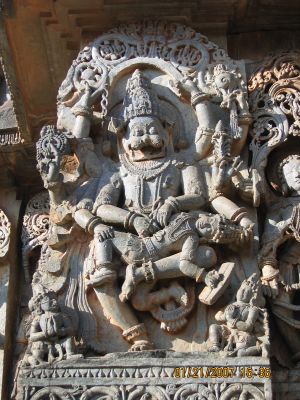 Whilst Hiranyakashipu had been performing the penance to be granted this boon, his home had been attacked by Indra and the other devas, seizing the opportunity in his absence. At this point the divine sage, Narada intervened in order to protect Hiranyakashipu's wife, Kayadhu, who he describes as 'sinless'. Following this event Narada takes Kayadhu into his care and while under the guidance of Narada, her unborn child (Hiranyakashipu's son) Prahlada, became affected by the transcendental instructions of the sage even at such a young stage of development. Thus, Prahlada when later growing as a child began to show symptoms of this earlier training by Narada, gradually becoming recognised as a devoted follower of Vishnu, much to his father's disappointment.

Hiranyakashipu eventually becomes so angry and upset at his son's devotion to Vishnu (who he sees as his mortal enemy) that he decides he must kill him but each time he to attempts to kill the boy, Prahlada is protected by Vishnu's mystical power. When asked, Prahlada refuses to acknowledge his father as the supreme lord of the universe and claims that Vishnu is all-pervading and omnipresent. To which Hiranyakashipu points to a nearby pillar and asks if 'his Vishnu' is in it:

"O most unfortunate Prahlada, you have always described a supreme being other than me, a supreme being who is above everything, who is the controller of everyone, and who is all-pervading. But where is He? If He is everywhere, then why is He not present before me in this pillar?"

Prahlada then answers, He was, He is and He will be. In an alternate version of the story, Prahlada answers He is in pillars, and he is in the least twig. Hiranyakashipu, unable to control his anger, smashes the pillar with his mace, and then following a tumultuous sound, Vishnu in the form of Narasimha appears from it and in defence of Prahlada moves to attack his father. In order to kill Hiranyakashipu and not upset the boon given by Brahma, the form of Narasimha was chosen. Hiranyakashipu could not be killed by human, deva or animal, Narasimha is neither one of these, as he is a form of Vishnu incarnate as a part-human, part-animal. He comes upon Hiranyakashipu at twilight (when it is neither day nor night) on the threshold of a courtyard (neither indoors nor out), and puts the demon on his lap (neither earth nor space). Using his nails (neither animate nor inanimate) as weapons, he disembowels and kills the demon.

Even after killing Hiranyakashipu none of the present demigods were able to calm Narasimha's fury, not even Shiva. So all the gods and goddesses called His consort, the goddess Lakshmi, but she was also unable to do so. Then, at the request of Brahma, Prahlada was presented to Narasimha, and finally, he was calmed by the prayers of his devotee.