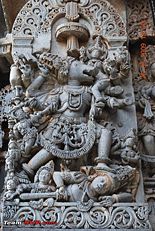 In Hinduism, Hiranyaksha (Sanskrit: हिरण्‍याक्ष) was a king of the Asuras.

Hiranyaksha was the son of Diti and Kashyapa. He had an elder brother named Hiranyakashipu, who after having undertaken penances which made him incredibly powerful and invincible unless several conditions were met, was later slain by Lord Narasimha, another Avatar of Lord Vishnu.

Hiranyaksha started a campaign of plunder across the worlds and pushed the world to the Pataal loka, or the under of the sea. He also stole the Vedas, the holy scriptures from the Lord Brahma, while he was asleep and performed huge atrocities. Lord Vishnu assumed the form of a white boar Varaha and dove into the ocean to lift the Earth, in the process slaying Hiranyaksha who was obstructing him. The battle lasted one thousand years.