The Hodag is a fictional animal that is part of the folklore of the American state of Wisconsin. Its history and acknowledgement are mainly focused around the city of Rhinelander in northern Wisconsin.

News reports from the time of its discovery in Rhinelander, Wisconsin by well known Wisconsin timber cruiser and prankster Eugene Shepard in 1893 claimed the Hodag had "the head of a frog, the grinning face of a giant elephant, thick short legs set off by huge claws, the back of a dinosaur, and a long tail with spears at the end".

Sheperd rounded up a group of local people to capture the animal. The group reported that they needed to use dynamite to kill the beast. A photograph of the remains of the charred beast was released to the media It was "the fiercest, strangest, most frightening monster ever to set razor sharp claws on the earth." 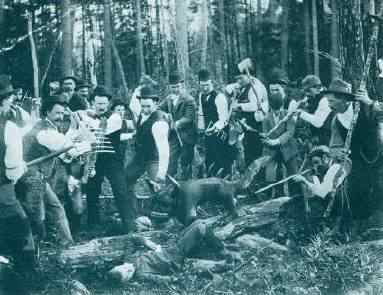 Shepard captured another Hodag in 1896, and this one was captured alive. He displayed this Hodag at the first Oneida County fair. Thousands of people came to see the Hodag at the fair or at Sheperd's display in a shanty at his house, even though Sheperd eventually admitted that the Hodag was a hoax.