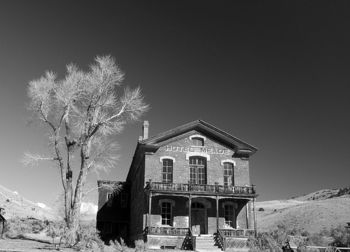 Hotel Meade is an abandoned hotel located in the deserted ghost town of Bannack, Montana, U.S.A. It has a history of paranormal activity, including sightings of ghostly figures and E.V.P.<ref name="jeff">Belanger, Jeff Encyclopedia of Haunted Places: Ghostly Locales from Around the World (New Page Books, 2005) ISBN 1-5641-4799-1</ref>

Bannack was the first territorial capital of Montana, and during the 1862 gold rush its population exceeded 10,000. Typical of such prospecting frontier locations, Bannack had the reputation of being one of the West's most violent towns.<ref name="britton">Britton, Vickie Montana Ghost Town Hotels. Suite101.com Retrieved 27 December 2008</ref> The hotel was first constructed in 1875 as the County Courthouse until the county seat transferred to Dillon in 1881.<ref name="baumler" /> The building stood empty until 1890, when it was purchased by Dr. John S. Meade who operated it as a hotel and social center until the 1940s.<ref name="britton" /> The building remains remarkably well-preserved and still has traces of its former grandeur, including fine wallpaper in its now-empty rooms, and a huge, spiral staircase.<ref name="britton" /> The town is now completely abandoned but remains one of the best preserved ghost towns in the state.<ref name="connery" />

Bannack is also believed to be the only town in the west to have had the leader of an outlaw gang, Henry Plummer, as its sheriff. The stagecoach route between Bannack and Virginia City was the scene of holdups, robberies and murders that made it almost impossible to travel the road safely. Having fled from California and Nevada to Montana, outlaw Plummer posed as a law abiding, God fearing citizen of Bannack and persuaded the citizenry to elect him as Sheriff.<ref name="cheno" /> Plummer and his gang of outlaws were responsible for over a hundred murders before he was finally uncovered as the gang leader.<ref name="connery">Connery, William S. Gold Along Grasshopper Creek. worldandi.com Retrieved 27 December 2008</ref> A gallows was imediately erected behind the town's saloon and he was hanged along with 23 members of his gang.<ref name="cheno">Chenoweth, Henry Bannackghosttowns.com Retrieved 27 December 2008</ref>

During the afternoon of 4 August 1916, Dorothy Dunn, her cousin Fern Dunn and their friend Ruth Wornick were playing in a pond at nearby Grasshopper Creek when they stepped off a ledge into deep water. Although a young boy, Smith Paddock, managed to pull the three girls out of the water, 16-year-old Dorothy had already drowned. Possibly due to the traumatic nature of her death, Dorothy is reportedly still haunting the second floor of the hotel where she spent much of her time while her mother worked there.<ref name="jeff" /> There have been numerous accounts of visitors seeing a young girl sitting at the top of top of the grand staircase and of children visiting with parents who seem to be chatting with no one but when questioned insist they were talking to a young girl.<ref name="weiser" />

Cold spots, the apparition of a teenage girl, and the sound of a crying child have been frequently reported in the building. The first sighting of a Dorothy's figure was reported very soon after he death by her best friend, Bertie Mathews, whose parents managed the hotel at the time. Bertie recognized Dorothy's long blue dress, and rather than attract attention to herself, the experience scared her so much that she seldom ever spoke about it.<ref name="baumler" />

Since then there have been multiple sightings of the teenage girl wearing a long blue dress on the second story of the old hotel. These reports most often come from children. Dorothy has also been sighted standing in an upstairs window by passersby on the street below.<ref name="weiser">Weiser, Kathy Ghost Town Ghosts in Bannack. Legends of America. Retrieved 27 December 2008</ref> Some investigators report finding breathing difficult as if they were underground or underwater, and unable to breathe.

Montana Park Ranger Tom Lowe reports that in June 1997, a visitor, Steve Bryson went into the hotel, accompanied by his seven year old daughter Abbey. "They were in one of the larger inside rooms upstairs. They stood there for a while looking around, then Abbey started moving toward one wall. She stood there for a long time just staring. Steve started to leave and thought that Abbey was following. But when he got halfway down the stairs, he noticed that she wasn't there. He went back to the room and saw her, standing in the dark, staring at nothing. Steve also says that he practically had to drag her out because she said that she was talking, or listening (he can't recall which), to a little girl and she didn't want to leave. Later Abbey said that the girl had an expression on her face that looked like she was worried and angry. Abbey also said that the figure tried to talk to her, that she could see her mouth moving but no sound came out. Abbey didn't seem upset, although Steve was a bit unnerved."<ref name="connery" /> 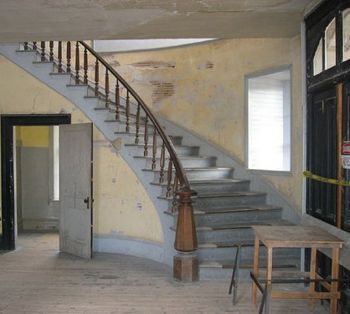 Paranormal investigator Greg Burchfield collected evidence of E.V.P. inside the hotel, a case often referred to now as the "Little Chicken" recording. Burchfield reports that he had been experimenting with EVP recordings for about 4 months prior, and the recording was made on his first visit to the hotel. At the time of the recording he was the only visitor left and no personnel were in the hotel.<ref name="burch">Burchfield, Greg "Little Chicken" at Hotel Meade EVP ghostvillage.com Retrieved 27 December 2008</ref>

"As you reach the top of the staircase, the feeling of a presence is palpable and I was actually hesitant to [continue]. I stood silent with the digital recorder going for about 5 minutes so as not to corrupt the recording and so I could concentrate on external noises. I then walked the upstairs hallway and back to the locked doors, and in one specific area it was much colder than the rest of the upstairs. I then decided to try and egg this ghost on into talking to me so I proceeded to ask her if she is a chicken. In the recording you will hear me ask the question then you will hear a distinct giggle, then I say "I think she's a little chicken," and I believe quite clearly in a playful voice and tone she says, "Little chicken from the farm," with a pronounced accent in her voice. When I played this recording back I was literally in tears."<ref name="burch" />

The recording can be heard here (.wav file, may require RealPlayer).

Perry Meade was the son of the hotel owner, Dr. John Meade. On 18 August 1895, he reported for work at the nearby Eugene Mine, promising his wife that this would be his last shift underground. It was: mud filled the mine's south drift, asphyxiating him.<ref name="baumler">Baumler, Ellen Bannack - A Spirited Town mt.gov Official Montana State Website. Retrieved 27 December 2008</ref> This has been linked also with the suffocating sensation felt on the second floor of the hotel. Within a year, Perry's young son died during a measles epidemic. The loss of their son and grandson convinced Dr. Meade and his wife to pass the running of the hotel to others, and they moved to California.