In Scandinavian folklore, the huldra is a seductive forest creature. Other names include the Swedish skogsrå or skogsfru (meaning "lady (ruler) of the forest") and Tallemaja (pine tree Mary). 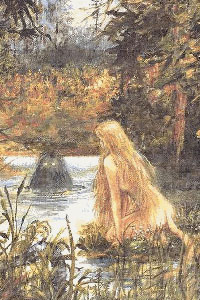 A huldra and Näcken. Artist not identified.

Norwegian, derived from a root meaning covered or secret (plural huldre or huldrefolk)

Seen from the front she is a stunningly beautiful, naked female being with long hair; from behind she is hollow like an old tree trunk. In Norway she has a cow's tail, and in Sweden she may have that of a cow or a fox. In Norway she has often been described as a typical dairymaid, wearing the clothes of a regular farm-girl, although somewhat more dazzling than most girls.

The huldra is one of several rå (keeper, warden), including the aquatic sjörå (or havsfru), later identified with a mermaid, and the bergsrå in caves and mines who made life tough for the poor miners. The huldra may be connected with the German Holda.

The dancing huldra is a common enactment at the Kjosfossen railway station during summers.

After the introduction of Christianity in Scandinavia, the main occupation of the old sky god Odin came to be to chase down and kill as many huldra as possible in the Wild Hunt. The rationale behind this antipathy is never clearly explained in the accounts. The Wild Hunt was alien to Norse tradition and was imported from southern Germanic traditions. Inferably, Odin's Wild Hunt connoted a violent storm where much lightning struck the wild forests where the huldras lived. This storm suggested Odin's berserker rage against his rivals, the trolls, including huldras. (Before Christianity, the storm god Thor was credited with lightning strikes against the jotun|giant trolls, in the form of his hammer.)

The huldra lures men into the forest to have sex with her, rewarding those who satisfy her and often killing those who don't. She often steals human infants and replaces them with her own ugly huldrebarn (changeling Huldre children). She has long been associated with hunting; she might blow down the barrel of a huntsman's rifle, causing it never thereafter to miss a shot. Some are not so lucky, or perhaps skilled, and escape her only after surrendering their sanity. A male huldre is called a huldu.

Sometimes she marries a local farm-boy, but when this happens, the glamour leaves her when the priest lays his hand on her, or when she enters the church. Some legends tell of husbands who subsequently treat her badly. She often wins her husband by showing physical strength, often by straightening a horseshoe. Some fairy tales leave out this feature, and let the couple live happily ever after.

Huldra would also sometimes try to marry human men, keeping their identity secret until marriage; only that blessing could rid them of their tails. If mistreated, a huldra would visit terrible vengeance upon her husband.

If betrayed, she can punish the man severely, as in one case from Sigdal, when she avenged her pride on a young braggart she had sworn to marry, on the promise that he would not tell anybody of her. On the contrary, the boy bragged about his bride for a year, and when they met again, she beat him around the ears with her cow-tail. He lost his hearing and his wits for the rest of his life.

In modern day Iceland, stories still abound of the Huldrefolk. It is said that work crews building new roads will sometimes divert the road around particular boulders which are known to be the homes of the Huldre.

There is a story of a huldra being kind to a collier, watching his charcoal kiln while he took a much needed rest. Knowing that she would wake him if there were any problems, he was able to sleep, and in exchange left provisions for her in a special place. A tale from Närke illustrates further how kind a huldra could be, especially if treated with respect (Hellström 1985:15).

A boy in Tiveden went fishing, but he had no luck. Then he met a beautiful lady, and she was so stunning that he felt he had to catch his breath. But, then he realized who she was, because he could see a fox's tail sticking out below the skirt. As he knew that it was forbidden to comment on the tail to the lady of the forest, if it was not done in the most polite manner, he bowed deeply and said with his softest voice: Milady, I see that your petticoat shows below your skirt. The lady thanked him gracefully and hid her tail under her skirt, telling the boy to fish on the other side of the lake. That day, the boy had great luck with his fishing and he caught a fish every time he threw out the line. This was the Huldra's recognition of his politeness.