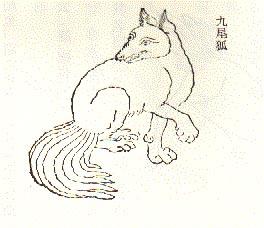 Nine-tailed fox, from the Qing edition of the Shan Hai Jing

In Chinese mythology, Huli jing (Chinese: 狐狸精) are fox spirits that can be either good or bad.

In Chinese, huli means fox, and jing,spirit. Also a modern colloquial term for a dangerous seductress, a slut, or a whore.

Foxes were sometimes called xian (or derivatives thereof, such as xianren) in order to avoid saying their real name, in the same way that English speakers referred to fairies as "the little folk". Other varieties of immortal creatures were called xian as well.

Foxes must attain great age before they can transform into humans, so all shapeshifting foxes are technically old; however, this term carries the connotation of a fox so old that it is old even for a fox. The term also removes some of the sexual connotations of the fox, since sexlessness is associated with age.

The fox spirits encountered in tales and legends are usually females and appear as young, beautiful women. One of the most infamous fox spirits in Chinese mythology was Daji (妲己), who is portrayed in the Ming novel Fengshen Yanyi.

According to mythologist Kuo Pu, who wrote in 324 A.D.

Not only master at shapeshifting, Huli jing are also said to transport persons in the air as well as giving those who worship him the ability to enter a house passing through walls. The life of the fox, through its craftiness, was believed to extend to 800 or 1,000 years, and he could even achieve immortality. The fox's accumulation of Yin is due to his nocturnal habits and this enabled the fox to easily assume the guise of woman. Further, as the fox naturally wishes to have a well-balanced constitution, it looks to gather Yang, the male element, wherever it can. A fox disguised as a woman is usually beautiful and seductive, as a man he is usually handsome, scholarly, charming, and ready for a good time. Sometimes, the transformation is not so good, in that a tail may occassionally protrude. When discovered and killed, the fox will sometimes be seen to have a human skull propped on its head, and so through that was able to use its magic to appear human.

Typically fox spirits were seen as dangerous. In Chinese lore, huli jings terrified the living by shapeshifting into many forms and haunting places. There is mention of the fox-spirit in Chinese chan-buddhism. Linji Yixuan (d.866) said: "The immature young monks, not understanding this, believe in these fox-spirits ..." The "fox-spirits" here are voices that speak of The Way, and/or Dharma. They are perceived to be malicious influences that lead the innocent astray. (Source: The Record of Linji, Honolulu 2008, p.218)

One of the most famous series of Chinese supernatural folklore is the 'Liao Zhai' Tales known as 'Strange Tales from a Chinese Studio' by Pu Song-ling in the late 17th century. . Many of the stories in 'Liao Zhai' and other Chinese legends describe the fox, who after meditating hard in mountain caves for centuries, attain magical shape-shifting powers.Although most legends condemn fox spirits as vicious demons, there are stories that put the fox in a more tender position, whose simple desire was basically to seek a companion to share the human experience of love and happiness, but faces the tragic condemnation and punishment after their identities are discovered. 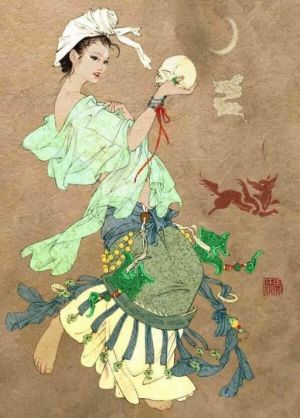 A beautiful daughter of a general, Daji was married forcibly to the cruel tyrant Zhou Xin (紂辛 Zhòu Xīn), the last king of the Shang Dynasty in China. A nine-tailed fox spirit who served Nüwa, whom Zhou Xin had offended, entered into and possessed her body, expelling the true Daji's soul. The spirit, as Daji, and her new husband schemed cruelly and invented many devices of torture, such as forcing righteous officials to hug red-hot metal pillars. Because of such cruelties, many people, including Zhou Xin's own former generals, revolted and fought against Zhou Xin's dynasty. Finally, King Wen of Zhou, one of the vassals of Shang, founded a new dynasty named after his country. The fox spirit in Daji's body was later driven out by Jiang Ziya (姜子牙), the first Prime Minister of the Zhou Dynasty and her spirit condemned by Nüwa herself for excessive cruelty.

According to some tales, the evil Chinese concubine Pao Sze/Pao-Ssu escaped her fate and fled to Japan, where she became a court lady named Tamamo-no-Mae and captured the heart of Emperor Toba. When he began to sicken, suspicious courtiers hatched a plot. They discovered that the elegant Lady Tamamo was a fox in disguise, and chased her across Nasuno Moor until she changed herself into a stone. The stone, the Sesshoseki, or Killing Stone, was so imbued with the fox's evil that it killed all who approached it.

The fox-maiden Kuzunoha served the human man Yasuna as a loving wife and mother, until she was discovered and had to leave behind her human life. Her son, Abe no Seimei, became a famous Taoist sorceror, and was to later free Tamamo-no-Mae from the Sesshoseki.

Foxes have been traditionally linked to taboo and sexuality. Nowadays in some areas of China, there still exist “Fox Fairy Temples” that are erected especially for women wanting to obtain charms to attract and seduce men.

The fox spirit has also been used as an explanatory factor in the incidence of attacks of koro, an ethnic psychosis found in Southern China and Malaysia in particular. Local traditions say that generations of madness in a family can be the result of having injured a Fox Fairy (one of its transformations).