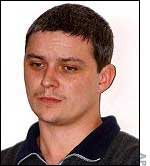 Ian Kevin Huntley (born 31 January 1974 in Grimsby, England) is a former school caretaker, who in 2003 was convicted of murdering two schoolgirls - Holly Wells and Jessica Chapman - in a case that is known as the Soham murders. He is expected to remain in prison until at least 2042.

Huntley was born in Grimsby on 31 January 1974, the first son of Kevin and Linda Huntley. By the time he started secondary school in September 1985, he was a target of bullying, which only increased with his founding and active promotion of the Grimsby and Immingham chapter of the Bros fan club. At the age of 13 the problem had escalated to such an extent that he was transferred to a different school. He left school in the summer of 1990 with 5 A-C grades in his GCSEs but decided to go into employment rather than study for A-levels.

Throughout the 1990s Huntley worked at various unskilled low-salary jobs. He was also investigated by the police on at least ten occasions for rape, underage sex, indecent assault and burglary. One rape and one burglary resulted in criminal charges but in both cases the charges were dropped by the Crown Prosecution Service because it was decided that there was not enough evidence. In 1993, he was convicted of riding an unlicenced and uninsured motorcycle and received a £250 fine.

Huntley has a brother called Wayne, who was born on 16 August 1975. He is married to Claire Evans (born 1976). Ian himself also married Claire, three days before his 21st birthday in 1995, but they separated not long after, although they had to wait four years before obtaining a divorce as Huntley refused to grant one until January 1999. Wayne married his brother's ex-wife in July 2000.

For more details on these crimes, see Soham murders.

In February 1999, the 25-year-old Huntley met 22-year-old Maxine Carr at Hollywood's nightclub in Grimsby. They shared a flat together in Barton-upon-Humber. Carr found a job packing fish at the local fish processing factory while Huntley worked as a barman. He also travelled to Cambridgeshire on his days off to help his father who worked as a school caretaker in the village of Littleport near Ely. He enjoyed the work so much that in September 2001 he applied for the position of caretaker at Soham Village College, a secondary school in a small town between Cambridge and Ely, after the previous caretaker was sacked for having an inappropriate relationship with a pupil.

Huntley was accepted for the post of caretaker at Soham Village College and he began work on 26 November 2001.

On 4 August 2002, at around 6pm, two 10-year-old girls, Holly Wells and Jessica Chapman, walked past Huntley's rented house in College Close. Huntley asked them to come into the house. He said that Carr was in the house as well, since she was a learning support assistant at St Andrew's Primary, the girls' school, and had got along well with them, although in fact she had gone to visit family back in Grimsby. Shortly after Holly and Jessica entered 5 College Close, Huntley murdered them.

His reasons for committing the murders may never be known, but minutes before seeing the girls Huntley had slammed the telephone down on Carr after a furious argument, as he was suspicious that she was cheating on him. The police believe that Huntley killed the girls in a jealous rage. There may have also been a sexual motive. It seems likely that either of, or possibly both of these motives drove Huntley to kill the girls. The police found no evidence of preplanning, and later said that they would have expected to find it if it was there.

However the girls died, Huntley disposed of their bodies in a ditch 20 miles away and set them alight in a bid to destroy the forensic evidence. The search for the girls was one of the most highly publicised missing person searches in British history. They were found 13 days later, on 17 August 2002, 12 hours after their clothing was discovered in the grounds of Soham Village College and Huntley had been arrested. He was later charged with two counts of murder and sectioned under the Mental Health Act at Rampton Hospital before a judge decided that he was fit to stand trial.

Huntley's trial opened at the Old Bailey on 5 November 2003. He was faced with two murder charges, while Carr was charged with perverting the course of justice and assisting an offender. Huntley admitted that the girls had died in his house, but claimed that he had accidentally knocked Holly into the bath while helping her control a nosebleed and had accidentally suffocated Jessica when she started to scream. But the jury rejected his claims that the girls had died accidentally and on 17 December 2003 returned a majority verdict of guilty on both charges. Huntley was sentenced to life imprisonment, with his minimum term to be decided by the Lord Chief Justice at a later date. Carr was cleared of assisting an offender but found guilty of perverting the course of justice and jailed for three-and-a-half years, but she was freed under police protection after just 5 months because she had already spent 16 months on remand. She was provided with a new identity and lives under police protection.

After Huntley was convicted, it was revealed that he had been investigated in the past for sexual offences and burglary but had still been allowed to work in a school. Home Secretary David Blunkett ordered an inquiry into these failings, chaired by Sir Michael Bichard, and later ordered the suspension of David Westwood, Chief of Humberside Police. The outcome of the inquiry criticised Humberside Police for deleting information relating to previous allegations against Huntley, as well as criticising Cambridgeshire Police for not following vetting guidelines. An added complication into the vetting procedures was the fact that Huntley had applied for the caretaker's job under the name of Ian Nixon. It is believed that Humberside Police did not check under the name Huntley on the police computer - if they had then they would have discovered a burglary charge left on file.

Since being jailed, Huntley has reportedly admitted that he lied when giving evidence at his trial. He changed his story about the death of Jessica, having previously admitted to suffocating her in a panic. An audio tape recording of Huntley speaking to a relative at Wakefield Prison revealed that he allegedly killed her when she tried to call for help on her mobile phone.

On 29 September 2005, High Court Judge Mr Justice Moses, who presided over Huntley's original trial, ruled that he should spend 40 years in prison before he can be considered for parole. He was not issued with a whole life tariff because the judge said there was no evidence of abduction of the two girls. The beginning of his sentence was backdated to October 2002, when he was first remanded in custody — not August 2002, as he was initially held in a mental hospital before a judge decided he was fit to stand trial.

It is not yet clear whether Huntley will appeal for his tariff to be reduced. Under its terms, he will not be able to apply for parole until October 2042, when he will be 68 years old. Even then, he will only be released from prison if he can convince the parole board that he is no longer a danger to the public.

The families of Huntley's victims later revealed that they had been hoping for a whole life tariff to be set, but Huntley's sentence was approximately three times heavier than the minimum terms imposed on most convicted murderers.

On 14 September 2005 Huntley was scalded with boiling water when another inmate attacked him. A prison service spokesman said that due to the nature of high-security prisoners, "it's impossible to prevent incidents of this nature occasionally happening", but Huntley alleged that the prison authorities failed in their duty of care towards him, and launched a claim for £15,000 compensation. Huntley was reportedly awarded £2,500 in legal aid to pursue this claim, a move strongly criticised by the Soham MP, Jim Paice, who insisted on tight restrictions on the use of public money for compensation, and said "The people I represent have no sympathy for him at all". Huntley's injuries meant that he did not attend the hearing at which his minimum term was decided.

The Wells and Chapman families received £11,000 in compensation for the murder of their daughters.

Part of this article consists of modified text from Wikipedia, and the article is therefore licensed under GFDL.
Retrieved from "https://www.monstropedia.org/index.php?title=Ian_Huntley&oldid=8167"
Categories: