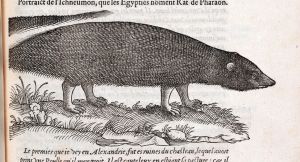 In medieval literature, the ichneumon or echinemon was the enemy of the dragon. 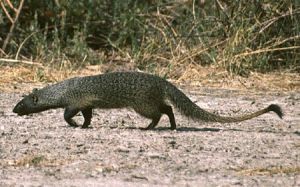 When it sees a dragon, the ichneumon covers itself with mud, and closing its nostrils with its tail, attacks and kills the dragon.

The ichneumon was also considered by some to be the enemy of the crocodile and the asp, and attack them in the same way.

The ichneumon was described by ancient authors such as Diodorus, who wrote about the mongoose controlling the population of crocodiles in Egypt by eating crocodile eggs wherever it finds them. Pierre Belon, who traveled from France to Egypt two-hundred fifty years before Napoleon’s expedition published a narrative of his travels in 1553.

The mongoose was among the many animals Belon observed, and the woodcut illustration in his book (see picture above) was influential on several generations of naturalists. Many of them had trouble figuring out the curious tail in Belon’s illustration, however. The woodcut artist lacked space to show the entire animal, so the end of the tail was depicted over the animal’s back, instead of extending out straight or drooping in a more natural position.

The ichneumon is known for its willingness to fight to the death with the snake. To do this, it first covers itself with several coats of mud, drying each coat in the sun to form a kind of armor. When ready it attacks, turning away from the blows it receives until it sees an opportunity, then with its head held sideways it goes for its enemy's throat. The ichneumon also attacks the crocodile in a similar manner. - Pliny the Elder [1st century CE] (Natural History, Book 8, 35–36, 37)

This animal is the mortal enemy of the asp. It is a native of Egypt and when it sees an asp near its place, it runs at once to the bed or mud of the Nile and with this makes itself muddy all over, then it dries itself in the sun, smears itself again with mud, and thus, drying one after the other, it makes itself three or four coatings like a coat of mail. Then it attacks the asp, and fights well with him, so that, taking its time it catches him in the throat and destroys him. - Leonardo da Vinci [16th century CE] ("The Notebooks of Leonardo da Vinci" edited by Jean Paul Richter)