In Greek mythology the Ichthyocentaur is a fish-centaur, or a particular kind of Triton. 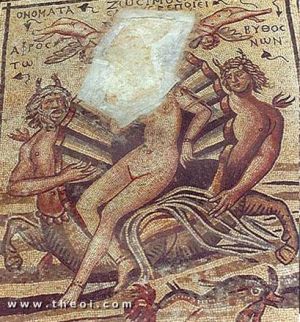 The sea creature is described as having the forefeet of a horse in addition to the human body and the fish tail. It is sometimes represented with a pair of lobster-claw horns. Traditionally, he is shown blowing on a conch shell to raise or calm a storm. Triton and other sea gods were sometimes also depicted in ancient mosaics as Ichthyocentaurs. 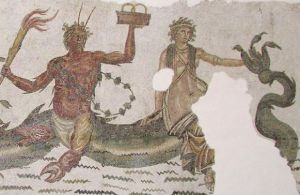 A pair of twin lesser-known Greek sea gods named Bythos (Sea-Depths) and Aphros (Sea-Foam) were depicted as ichthyocentaurs. They were half-brothers of Chiron and the sons of Poseidon and the sea goddess Amphitrite.

The twin ichthyocentaurs appear together in several works of art. The mosaic above (Z10.1) from Zeugma, depicting the birth of Aphrodite, is inscribed with the names of the two who are lifting the goddess' cockle-shell out of the sea. Aphros was perhaps regarded as her foster-father, given their similarity in names. The two sea-gods also appear in a pair of matching sculptures (belonging to the Louvre and Vatican Museums) depicting them carrying Seilen companions of the god Dionysos, after his company was driven into the sea by the Thrakian king Lykourgos.

The Sea-Centaurs were probably derived from the divine Fish of Syrian mythology which carried Ashtarte ashore following her watery-birth. These were set amongst the stars as the Constellation Pisces.

"Venus [Ashtarte]. Into the Euphrates River an egg of wonderful size is said to have fallen, which the fish :rolled to the bank. Doves sat on it, and when it was heated, it hatched out Venus [Aphrodite], who was later :called the Syrian goddess [Ashtarte]. Since she excelled the rest in justice and uprightness, by a favour :granted by Jove [Zeus], the fish were put among the number of the stars [as Pisces], and because of this the :Syrians do not eat fish or doves, considering them as gods. [N.B. These fish appear to be the original Syrian :form of the late classical Ikhthyokentauroi]."