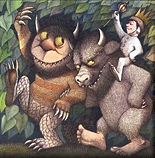 Sendak's Where the wild things are

An Imaginary friend, also known as imaginary companion, is a fictional character created by children. Imaginary friends may exist for the child into adolescence and sometimes adulthood.

Imaginary friends often have elaborate personalities and behaviors. Although they may seem very real to their creators, studies have shown that children do have an understanding that their imaginary friends are not real.

Imaginary friends often function as tutelaries (or perform a tutelary function) when they are engaged by the child in play activity.

According to several theories of psychology, an understanding of a child's conversations with their imaginary friends can reveal a lot about the anxieties and fears of that child as well as the child's aspirations and perception of the world. Some children report that their "imaginary friends" manifest themselves physically and are indistinguishable from real people, while others say that they see their friends only in their heads.

Recent research has been providing some surprising answers to some of these questions. Firstly, there is now clear evidence that imaginary friends are a common feature in childhood development.

It is now recognized that imaginary friends are often part of normal development.

A good example comes from the United States, where pre-school children and their parents took part in a 2004 study looking at different aspects of development, including imaginary companions.

The children were then followed up after starting school, when they were aged seven years. The researchers were very surprised to find that 65% of children up to age seven currently or previously had had imaginary friends.