An imp is a mythological being similar to a fairy, frequently described in folklore and superstition. 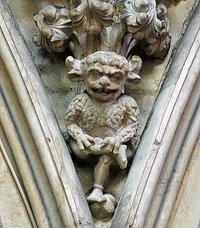 The imp in Lincoln cathedral

The attendants of the devil and familiars of witches called Familiars are sometimes described as imps. This is the result of the demonization of creatures of folklore by the Church. Imps are sometimes described as a subunit of a pack of Brownies, but also to describe certain children's behaviour. The Japanese Kappa is often considered to be a type of water dwelling imp.

Usually described as mischievous more than seriously threatening, they slink or skitter about, running from one pool of shadow to another. The trickery ascribed to them is, generally, confined to missing, misplaced, or moved articles (socks, keys, etc.) and stubbed toes.

Some accounts of imps claim that they are desperately lonely, and always travel in pairs or in mobs. Some accounts of imps treat them as capable of being turned to good, because they are so desperately lonely they would do almost anything — even commit good deeds — to have a committed friend; however, it is regarded as almost impossible for any imp to fully forsake its "impish" ways.

Imps are sometimes described as fond of music, and capable of being charmed into making a promise to aid, and "do good" in that manner through music — though there is always likely to be some mischievous trick to be attached to the barter.