In European medieval legend, an incubus is a demon in male form supposed to lie upon sleepers, especially on women in order to have sexual intercourse with them. They are also believed to do this in order to spawn other incubi.

Closely related to the incubi/sucubi are the Slavic Mora, the German Mahr, and the Scandinavian Mara, from which the word nightmare is derived. 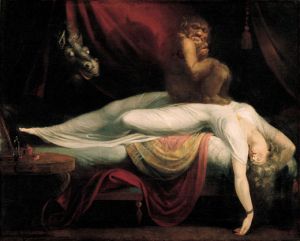 The word is derived from the Latin preposition in, which in this case means on top of, and cubo, which is Latin for "I lie". The word incubo translates into "I lie on top".[3] In modern psychological usage, the term has been applied to the type of nightmare that gives one the feeling of a heavy weight or oppression on the chest and stomach.

Guazzo described the incubus in his "compendium Maleficarum (1608)

as the incubus can assume either a male of a female shape; sometimes he appears as a full-grown man, sometimes as a satyr; and if it is a woman who has been received as a witch, he generally assumes the form of a rank goat.

In some legends, incubi and succubi were said not to be different genders of the same demonic species but the same demon able to change their sex; the idea being that a succubus would be able to sleep with a man and collect his semen, and then transform into an incubus and use that seed on women.

Thomas Aquinas insisted that demons were sterile; therefore the only way the incubus could impregnate a woman was by receiving the semen from a succubus who had received from a man. Also, aiding in this theory was the idea that demons were able to change their sex at will. Aquinas further asserted that a demon could use semen lost during a wet dream so a man could be at one and the same time a virgin and a father. Here Aquinas contradicted Augustine's biblical interpretation of Genesis 6:4 in which he attempted to prove that fallen angels begot children of mortal women "The sons of God came in unto the daughters of men, and they bare children to them".

Nevertheless their offspring were thought to be supernatural in many cases, even if the actual genetic material originally came from humans. The half-human offspring of such a union is a Cambion. The most famous legend of such a case includes that of Merlin, the famous wizard from Arthurian legend. This particular idea was also explored in the Stephen King series The Dark Tower.

According to the Malleus Maleficarum, exorcism is one of the five ways to overcome the attacks of Incubi, the others being Sacramental Confession, the Sign of the Cross (or recital of the Angelic Salutation), moving the afflicted to another location, and by excommunication of the attacking entity, "which is perhaps the same as exorcism." [12] On the other hand, the Franciscan friar Ludovico Sinistari stated that incubi "do not obey exorcists, have no dread of exorcisms, show no reverence for holy things, at the approach of which they are not in the least overawed."[5]

One of the earliest mention of a incubus comes from Mesopotamia on the Sumerians king's list, ca. 2400, where the hero Gilgamesh's father is listed as Lilu (Lila).[6] It is said that Lilu disturbs and seduces women in their sleep, while Lilitu, a female demon, appears to men in their erotic dreams.[7] Two other corresponding demons appear as well, Ardat lili, who visits men by night and begets ghostly children from them, and Irdu lili, who is known as a male counterpart to Ardat lili and visits women by night and begets from them. These demons were originally storm demons, but they eventually became regarded as night demons due to mistaken etymology.[8]

The incubus was a special priest embodying a prophetic spirit who would come in dreams or visions to those who "incubated" overnight in an earth-womb Pit placed under or in pagan temples. Those entering it wished to "incubate" or sleep there overnight in magical imitation of the incubatory sleep of the womb, to be visited by an "incubus" or spirit who brought prophet dreams. The Greeks were known to practice incubation especially in the healing temples of Asklepios and Hygieia. The Pythagorean philosopher Thales of Miletus, said to be one of the Seven Wise Men of the ancient world, who acquired his intellectual skills through communion with the Goddess of Wisdom in an abaton. [9]

This custom of incubation was carried into Christianity. It became known as watching or keeping the vigil. It was recommended in times of troublesome decision making that one should watch and pray in a church overnight in order to court a vision of guidance. Eventually the incubus was diabolized; and no longer regarded as a guiding angel. The cause for his fall from grace was tales of ancient tradition midnight sexual relationships between incubating women and priests, or incubating men and priestesses. This caused the incubi to be known as spirits of lust. The concept that sexual activity could possess a spiritual nature was completely negated. [9]

Soon it was thought incubi produced children through the demonic version of the Virgin Birth. This originated in a round of name-calling. One early priest Father Ludovico Sinistrari thought the incubus when having intercourse with a woman begot the fetus from his own seed. He added the Holy Mother Church could correct him since this was his personal opinion. Sinistrari called that damnable heresiarch Martin Luther a well-known example of a devil-begotten man. Luther seemed no more charitable since he said that all odd-looking children should be destroyed at birth, for they were clearly the offspring of demons. During the witchhunts, alleged intercourse with demons or with Satan was one of the purported sins for which women were killed. On that theory, a woman was burned at Carcassonne in 1275 for bearing a child to the devil.

A number of mundane explanations have been offered for the origin of the incubus legends. They involve the Medieval preoccupation with sin, especially sexual sins of women.

Because of the weight given to sexual sin in the Middle Ages, nocturnal arousal, orgasm or nocturnal emission were explained away by the legends of creatures causing an otherwise guilt-producing and self-conscious behavior. Thus people could say they were not to blame for it; it was obviously outside of their control: they were a victim. Young women/men being sexually assaulted in their sleep by a known attacker such as a friend or family member, although not common, has been reported and may explain some nocturnal attacks. The victims may find it easier to explain the attack as supernatural rather than confront the idea that the attack came from someone that is trusted in the family.

In the modern era, succubi have featured in roleplaying games as tantalizing imagery for marketing. The theme of the incubi has continued into modern times as well, with stories of unseen paranormal beings which rape female victims such as Invisible Masters and the creature in the movie The Entity.

They were also one of the creatures of the White Witch present at the killing of Aslan in The Lion, the Witch and the Wardrobe by C.S. Lewis.

In the 2006 book Trail of an Incubus by Iliya Englin the incubus is portrayed as a different humanoid species, outwardly human but with far greater longevity and physical strength. Their intelligence is about the same or greater than human, albeit it with certain blind spots. They hate humanity for displacing them from the top of the food chain, and their character traits give rise to traditional demonic myths - an enemy moving amongst us, intelligent, resourceful and hostile – and in constant search for human virgins.

Anita Blake series by Laurell K. Hamilton introduce his male vampire lover, Jean Claude, and later the Executioner herself, having to deal with the spirit of incubus and succubus.

There is a 1965 movie called Incubus starring William Shatner, where he is tempted by a lusting succubus in order to corrupt hi pure soul. Throughout the movie, the demon is female and referred to as "incubus", never a "succubus".

Part of this article consists of modified text from Wikipedia, and the article is therefore licensed under GFDL.
Retrieved from "https://www.monstropedia.org/index.php?title=Incubus&oldid=16061"
Categories: