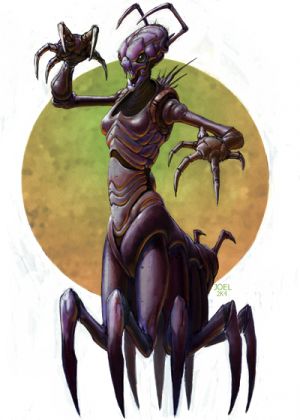 In science fiction and ufology, insectoid is the name given to alien creatures or extraterrestrials/subterraneans that shares a similar body or traits with common earth insects and arachnids.

Insectoids are hybrids of mixed parts between humans and insect. Most popular insects are mantis, spiders, bugs and scorpions.

Abduction researcher Brian Thompson claims that a nurse acquaintance of his reported that during 1957 in Cincinnati she encountered a 3-foot-tall (0.91 m) praying mantis-like entity two days after a V-shaped UFO sighting. This mantis-like creature is reminiscent of the insectoid-type entity reported in some abduction accounts. He related this report to fellow researcher Leonard Stringfield. Stringfield told him of two cases he had in his files where separate witnesses reported identical circumstances in the same place and year.

Abduction researcher Karla Turner in Into the fringe reported that a man called David remembered an encounter with a giant mantis during an hypnosis session.

Linda Moulton Howe in Glimpses of Other Realities describes some claims of alien mantis. The book includes the cases of Linda Porter and David Huggins. In 1988 Linda Porter remembered an abduction by alien mantis which she said took place when she was a child. In the same year 1988 David Huggins remembered an encounter with alien mantis that he said took place in the 1950's, when he was a child. The book report also the case of Jeanne Robinson, which said she have received messages by an alien similar to a mantis. According to Ms Robinson, these aliens are a branch of Greys.

Vicki Cameron in UFO experience in Canada reported a case of an abduction by an insectoid alien similar to a grasshopper.

Martin Kottmeyer argue the phenomenon of mantis alien may be explained by the effects of cultural factors. He remembered that in the movies The Deadly Mantis (1957) and Son of Godzilla (1968) appeared giant mantises, though they are not aliens. Kottmeyer remembered too that in the Saturday morning kid show Space Ghost (1966) appeared an alien mantis named Zorak.

In real life, insectoid robots such as hexapods have been designed for scientific or military uses. Research continues to miniaturize these robots to be used as flying spies or scouts. Insectoid features may also increase the effectiveness of robots in traversing various terrains.

Insectoid aliens are commonly found in science fiction, being featured in classic sci-fi novels like Starship Troopers, as well as television shows such as Star Trek and Doctor Who. They also make an appearance in classic games such as Starflight, modern games like StarCraft and Warhammer as well as the Star Wars universe. Examples of insectoid aliens in sci-fi anime are the "Uchuu Kaijuu" ("Space Monsters") from Gunbuster and the "Vajra" from Macross Frontier.