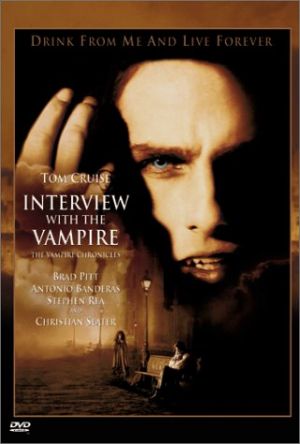 Interview with the Vampire is a novel by Anne Rice written in 1973 and published in 1976 by Alfred A. Knopf. The book centers on themes of immortality, loss, sexuality, and power. It quickly became a cult success, with a huge influence on present Goth culture. It was followed by several sequels, collectively known as The Vampire Chronicles.

The novel was set apart from its predecessors of the vampire genre by its confessional tone from the vampire's perspective, touching on existential despair and the sheer boredom of lifeless immortality.

In 1994, Neil Jordan directed a film based on the novel, using a screenplay written by Anne Rice. The movie starred Tom Cruise as Lestat, Brad Pitt as Louis, Antonio Banderas as Armand, Stephen Rea as Santiago, Christian Slater as Daniel Molloy (credited only as "Malloy"), and an 11-year-old Kirsten Dunst as Claudia.

The book is markedly different from the movie. In the movie, Louis was married and lost his wife in childbirth, giving the reason for his depression. In the book it was his brother's death that threw him into depression and cursed him to long for death. The movie makes Lestat seem older than he really is, but in the book Louis can tell Lestat isn't that old because Lestat moves his blind mortal father into Pointe du Lac.

In the book, Louis does feed on mortals early in his life as a vampire. When Lestat first takes him hunting, he feeds on a slave. Later Lestat shows Louis the glass trick, in which he bites into a rat and squeezes the blood into a glass and takes a sip. This is when Louis decides to feed on animals. But during this four years of feeding only on animals (rats, chicken, and cattle) Louis also bleeds Lestat's father, who is dying, when the slaves are rising up against Louis and Lestat because they suspect them of being 'creatures'. When Louis finally does go back to feeding on mortals it is only on strangers; he prefers not to know anything about them, refusing to stalk his prey or toy with them like Lestat does.

In the book, Louis falls in love with Babette Freniere (one of his neighbors), whose plantation was close to Pointe du Lac. After Louis burns down Pointe du Lac, he and Lestat go to the Freniere Plantation and ask her for a room. She shows them to the wine cellar, but locks them in from the outside (in the movie they go to a graveyard). She comes to them after hearing all the rumors the slaves are passing around and questions them. Eventually they end up outside the house and Louis is talking to Babette, who has hate in her eyes and is disgusted, while Lestat goes to get their horses and carriage. Babette throws her lantern on Louis and he goes up in flames. Lestat puts the fire out and feeds on Babette for setting Louis on fire, but Louis stops Lestat killing Babette and they flee to New Orleans. Babette became insane and eventually dies.

Claudia is put forth as being only five years old at the time she was made a vampire in the book; in the movie she appeared to be closer to ten years old. Her younger age in the book makes the fact that she could never grow up even more dramatic. In the movie Claudia goes into a rage and cuts off her hair only to have it grow back again. This does not happen in the book at all. In fact it happens to Gabrielle, Lestat's mother, in the next book The Vampire Lestat, and it only grows back during the day, while she is sleeping.

In the movie Claudia kills an immigrant woman and buries her under dolls in her bed. When questioned why she did it, she states that she wanted her body or wanted to be her. In the book this did not happen. Claudia killed two female servants, mother and daughter, and hid them in the kitchen, which was never used. When their family came looking for them, Lestat ended up killing them. Louis burned the two servants bodies in the kitchen stove. When Louis and Lestat finally get a chance to question Claudia, she does her "Which one of you did it? Which one of you made me the way I am?" performance.

In the book, Louis signs over some of the rental properties to Lestat as a way to buy their freedom.

Claudia tells Louis of her plan to kill Lestat in the book, but doesn't in the movie. When Claudia attempts to kill Lestat she "rapes" him, by feeding on him while he is bleeding to death from multiple wounds she inflicted. Afterward she shows signs of the mind gift.

In the movie Lestat mentions that he found a person who would make a better vampire than Claudia, but that person is never seen. In the book, Lestat befriends a musician and often questions Louis as to whether he did or did not kill him. After the attempted murder of Lestat, the musician comes around the house asking questions about Lestat and isn't satisfied with any of Louis' answers. Louis notices the puncture marks on the musician's neck and thinks back to Lestat telling Claudia that he found someone who would make a better vampire than both of them. The next night, the night of their departure for Europe, Claudia comes running home crying that someone's been following her and it is the musician, who is now a vampire. Then they hear Lestat banging on the back door. Lestat finally forces his way into the house and Louis sets him on fire and then Lestat and Louis start fighting. The musician climbs up over the balcony and fights Claudia. Claudia easily escapes the musician, who can't seem to get his hands on her. She comes to Louis' aid and beats Lestat with the poker to get him off Louis and they run out of the burning house into the night.

In the book Louis and Claudia traveled through several parts of Europe (Varna, Carpathians, Piraeus, Germany, Transylvania, Hungary, and Bulgaria) looking for vampires before they arrived in France. They also met several vampiric creatures that were quite unlike most of the vampires seen in the Vampire Chronicles. In the movie this part is only narrated by Louis while Claudia browses charcoal drawings she has made throughout their travels.

The movie immediately cuts from Madeleine's transformation into a vampire to her and Claudia's apprehension by the Theater vampires, while in the book she lives with Claudia and Louis for one week before she dies.

In the book Armand is described as a young man aged seventeen, while in the movie he appears to be in his late twenties.

In the movie the Theater vampires lead by Santiago suspect that Louis and Claudia killed Lestat, while in the book Lestat comes to Paris in person (the reasons are told in The Vampire Lestat) and informs on Claudia. Lestat makes a deal with the vampires that they would kill Claudia, but allow him to have Louis.

In both book and movie, Armand approves of Claudia's death and arranges for Louis to be buried alive. Immediately after Claudia's death he rescues the buried Louis, because he wants him to have Louis to himself. Louis avenges Claudia's death by destroying the Paris Coven but spares Armand. In the movie Louis refuses Armand's offer to become his companian and abandons him in Paris, while in the book Louis and Armand, united in a love/hate relationship, travel the world together. Eventually Louis becomes almost devoid of feeling (of the sort that Armand yearns for in his companion), and Armand leaves Louis.

Another small difference is the fact that vampires cry tears of blood in the books; in the film Louis cries regular tears of water.

The endings of the book and movie also differ. In the book, Louis feeds on Daniel Molloy, and when Daniel wakes the next day he sets off for New Orleans to track down Lestat, while in the movie he is attacked by Lestat while driving over the Golden Gate Bridge and it is implied that Lestat is going to turn Daniel into a vampire.

Louis de Pointe du Lac was born in New Orleans in 1766, and was made into a vampire by Lestat in 1791. He has glossy black hair and glittering green eyes. Anne Rice wrote Interview with the Vampire after the death of her daughter, and Louis, as the main character, is portrayed as melancholic and depressive as a projection of Rice's own feelings at the time. He displays emotion that is uncommonly human for a vampire, and feels moral remorse in killing humans when he feeds. Louis, faithful, passive and frequently displaying weakness, strongly contrasts against Lestat.

Daniel Molloy is a reporter who records Louis' life story. He has ash-blond hair and violet eyes and looks young and boyish for his age. After the interview, he wants to become a vampire, feeling that Louis wastes his "gift."

Lestat de Lioncourt was born in 1760. He has long, pale blond hair, and blue eyes that frequently appear gray when reflecting light. In 1779, he flees to Paris with his friend Nicholas to become an actor. There, an old vampire named Magnus ambushes him and makes him into a vampire against his will. Then, after teaching Lestat nothing, Magnus hurls himself into a huge bonfire telling Lestat to scatter the ashes else he will rise again and destroy Lestat. He is the narrator of five of the books in the Chronicles, in which he portrays himself as the hero. His fledglings are Gabrielle, Nicholas, Louis, Claudia, the musician, David, and Mona Mayfair. Lestat is bold, brash, impulsive, fearless, and lives without regret, and contrasts strongly both physically and in personality with Louis.

Claudia is a very young girl turned into a vampire in 1794 by Louis and Lestat. She is described as a radiant, doll-like child with golden curls and big blue eyes. Although she remains eternally in the body of a small child, she mentally grows into a woman, and eventually comes to despise her two "fathers" for condemning her to remain trapped in a small, helpless form. Louis is horribly attached to Claudia, feeling guilt for his part in her creation, and thus is distraught when she dies.

Santiago is the classical vampire and member of the Théâtre des Vampires. He is dark-haired and dark-eyed. At first he seems to be a jokester, but then turns out to be a cruel murderer. He kills Claudia and Madeleine. Louis avenges Claudia's death by decapitating him.

Armand was created in the 15th century by Marius. Armand is the leader of a group of vampires and manages the Théâtre des Vampires in Paris. His character is embossed by a lot of shocking experiences. He is very intelligent and swore never to make a vampire, until he gave the dying Daniel Molloy the “dark gift” in Queen of the Damned. In the book he is described as a youth aged seventeen, with auburn hair and large brown eyes, but in the movie he has long black hair and looks much older.

Madeleine is a Parisian dollmaker in the 1860s who lost her daughter and, after meeting Claudia, thereupon begins to love Claudia as if she were her own flesh. She has dark red ringlets and violet eyes and a small, childlike mouth. Louis holds a poor opinion of Madeleine, opining that she lives in a fantasy world and doesn't fully comprehend the risks involved in associating with Claudia. Eventually Claudia convinces Louis to turn Madeleine into a vampire, to serve as a companion for Claudia. She’s murdered with Claudia by the coven of the Theatre des Vampires.

Part of this article consists of modified text from Wikipedia, and the article is therefore licensed under GFDL.
Retrieved from "https://www.monstropedia.org/index.php?title=Interview_with_the_vampire&oldid=8684"
Categories: