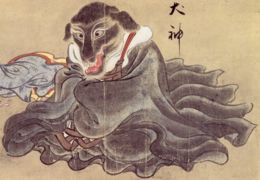 In Japanese mythology an inugami (犬神, lit. "dog god") is a familiar spirit originated from a dog.

Inugami are known for carrying out vengeance or acting as guardians on behalf of the inugami-mochi, or "inugami owner". Inugami are extremely powerful and capable of existing independently, as well as turning on their "owners" and even possessing humans.

The general belief is that an inugami is created by tying a dog and placing a bowl of food just out of its reach. It would take days for the dog to die, and during this time the dog's master would tell it that its pain is nothing compared to his own. The onmyouji then follow some secret black magic rituals. When the dog dies, it become an inugami; since its dying wish would have been to eat, the food placed around the corpse would act as a placatory offering, and thus make the spirit obedient. The ghost-dog is then used as weapon to scare to death the enemies of the dog's master. Inugami are, by any account, terrible and wrathful, fearful and powerful. Only an experienced and prepared onmyouji may ever attempt to control one successfully.

A more specific legend states that an old woman who desired revenge against an enemy buried her treasured dog in the ground with only its head sticking out, and said "If you have a soul, do my will and I will worship you as a god." She then sawed the dog's head off with a bamboo saw (which would have been extremely painful), releasing the dog's spirit as an inugami. The spirit did as she wished, but in return for its painful death it haunted the old woman.

In the Oki Islands, the inugami takes on the function that the kitsune (fox) holds in many other regions of Japan. It is believed that an inugami-mochi will be blessed with great fortune and success, and that favors granted by them will be returned with interest. However, in exchange the inugami-mochi are shunned by other people, and find it hard to get married; they must also be careful not to offend their inugami lest they receive its wrath, as unlike the kitsune, an inugami does not merely follow its master's wishes, but also acts on its own impulses.

An inugami's original body stays behind when it leaves to follow its masters wishes; the buried corpse slowly withers and rots, and if the inugami returns after the body is no longer habitable, it may take control of its master's body, making it even more powerful. Possession by an inugami is said to cure sickness, or ill health; however, it also results in the possessed behaving like a dog. Only a powerful sorceror or witch doctor can cure the unfortunate bystanders from the dog-ghost's possession.

Part of this article consists of modified text from Wikipedia, and the article is therefore licensed under GFDL.
Retrieved from "https://www.monstropedia.org/index.php?title=Inugami&oldid=15175"
Categories: