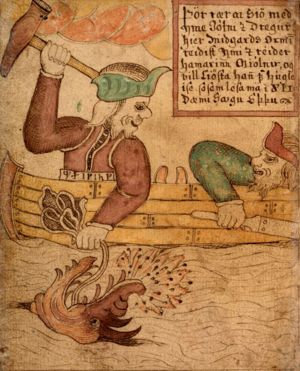 Thor goes fishing for the Midgard Serpent in this picture from an 18th century Icelandic manuscript.

Jörmungandr is a sea serpent of the Norse mythology, the middle child of Loki and the giantess Angrboða.

Jörmungandr is also sometimes referred to as the Midgard Serpent (Old Norse: Miðgarðsormr) or the World Serpent. His name is sometimes anglicized as Jormungandr, Jormungand or Iormungand.

According to the Prose Edda, Odin took Loki's three children, Fenrisúlfr, Hel and Jörmungandr. He tossed Jörmungandr into the great ocean that encircles Midgard. The serpent grew so big that he was able to surround the Earth and grasp his own tail, and as a result he earned the alternate name of the Midgard Serpent or World Serpent. Jörmungandr's arch enemy is the god Thor.

There are three preserved myths detailing Thor's encounters with Jörmungandr.

In one, Thor encounters the serpent disguised as a colossal cat by the giant king Útgarða-Loki. As one of the tasks set by Útgarða-Loki, Thor must lift the cat, and though he is unable to lift such a monstrous creature as Jörmungandr, he manages to lift it far enough that it lets go of the ground with one of its four feet. He comes so close that when Jörmungandr is revealed by Útgarða-Loki it is still an impressive deed. This myth is only found in the Prose Edda.

Another encounter came when Thor went fishing with the giant Hymir. The two did not get along, and when Hymir refused to provide Thor with bait, Thor struck the head off Hymir's largest ox to use as bait. They rowed to a point where Hymir often sat and caught flat fish, and he drew up 100 whales and lions. Thor demanded to go farther, and so they did. Hymir told Thor that the part they were at was unsafe, because of the Serpent, but Thor ignored him, and to Hymir's horror they rowed out further.

Thor then prepared a strong line and a large hook, and Jörmungandr bit. Thor pulled the serpent up; the two faced off, Jörmungandr dribbling poison and blood. Hymir went pale with fear, and as Thor grabbed his hammer to kill the serpent, the giant cut the line, leaving the serpent to sink beneath the waves.

This encounter seems to have been the most popular motif in Norse pagan art. Four picture stones can be definitely linked with the myth.

Thor's foot goes through the boat as he struggles to pull up Jörmungandr in the Altuna Runestone.

Their last meeting will come at Ragnarök, when Jörmungandr will come out of the ocean and poison the sky. Thor will kill Jörmungandr and then walk nine paces before falling dead from the serpent's poison.

Depictions of and references to Jörmungandr exist in modern popular culture.

The major sources for myths about Jörmungandr are the Prose Edda, Húsdrápa, Hymiskviða and Völuspá.

Part of this article consists of modified text from Wikipedia, and the article is therefore licensed under GFDL.
Retrieved from "https://www.monstropedia.org/index.php?title=Jörmungandr&oldid=9212"
Categories: