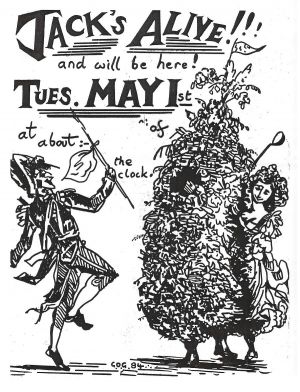 A Jack in the Green (also Jack in the green, Jack-in-the-green, Jack i' the Green, Jack o' the Green etc) is a participant in traditional English May Day parades and other May celebrations, who wears a large, foliage-covered, garland-like framework, usually pyramidal or conical in shape, which completely covers their body from head to foot.

Jack is a colorful figure, almost 3m (nine feet) tall, covered in greenery and flowers. In Whitstable, he is accompanied by two attendants, almost invariably drawn from the ranks of Oyster Morris, representing the legendary figures of Robin Hood and Maid Marian. In Hastings, he is also accompanied by attendants, here known as Bogies, who are completely disguised in green rags, vegetation, and face paint. The attendants play music, dance and sing as they guide Jack through the streets to celebrate the coming of Summer. 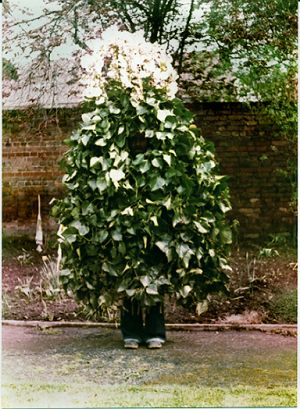 A Jack in the Green in Kingston upon Thames, in the mid 1970s

In the 16th and 17th centuries in England people would make garlands of flowers and leaves for the May Day celebration. After becoming a source of competition between Works Guilds, these garlands became increasingly elaborate, to the extent that it covered the entire man. This became known as Jack in the Green. For some reason the figure became particularly associated with chimney sweeps; there are several explanations thereof, but none has been proven conclusively. 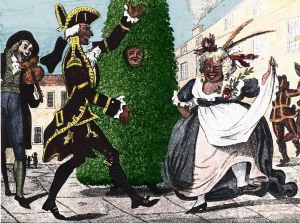 By the turn of the 19th century the custom had started to wane as a result of the Victorian disapproval of bawdy and anarchic behavior. The Lord and Lady of the May, with their practical jokes, were replaced by a pretty May Queen, while the noisy, drunken Jack in the Green vanished altogether from the parades.

Jack in the Green was revived in Whitstable, Kent in 1976 and continues to lead an annual procession of Morris dancers through the town on the May Bank Holiday. A separate revival occurred in Hastings in 1983 and has become a major event in Hastings Old Town calendar. Ilfracombe in North Devon has had a Jack in the Green procession and celebration since 2000. It is supported by local schoolchildren, dancing around the May Pole on the sea front, and by local morris men and dance groups from in and around the district.

Revivals of the custom have occurred in various parts of England; Jacks in the Green have been seen in Bristol and Deptford and Knutsford, among other places. Jacks also appear at May Fairs in North America.

Amongst modern "folkies" and neo-pagans the Jack in the Green has become identified with the mysterious Green Man depicted in medieval church carvings and is widely felt to be an embodiment of natural fertility, a spirit of the primeval greenwood and a trickster; by extension he is linked to such mythological characters as Puck, Robin Goodfellow, Robin Hood, the Green Knight and others.

Similar characters to the English Jack in the Green were known in parts of Europe and Russia, and may be still. Some were involved in mock sacrifice, where the leafy framework was thrown or ducked into a pond or river (sometimes with the person still inside it). These festivities were variously associated with Easter Monday, St George's Day (23rd of April), May Day, and Whitsuntide. Occasionally the disguise was straw rather than leaves, a link with the straw bears of German Carnival (and the sole English example, the Whittlesea Straw Bear), suggesting these particular figures personified Winter rather than Spring or Summer. Folklorist Sir James Frazer cited many examples in The Golden Bough.

Other related figures in Britain include the Burry Man of South Queensferry and the Garland King of Castleton, Derbyshire, who parades on Oak Apple Day.