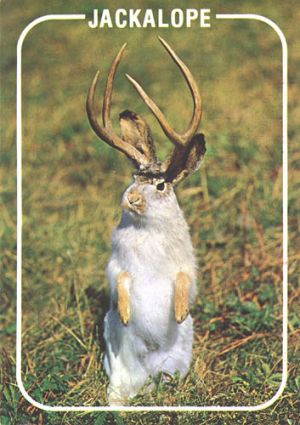 The jackalope is usually portrayed as a rabbit with antlers

One common southwestern species of jackrabbit is called the antelope jackrabbit, because of its ability to run quickly like an antelope; it would have been easy enough to imagine instead (for comic effect) that this jackrabbit had the horns of an antelope.

The first horned hare appeared in Conrad Gesner's Thierbuch (a German version of his Historia Animalium Liber I: De Quadrupedibus Viviparis by Konrad Forer, first published in 1563.) Additionaly, there are many more illustrations of horned hares shown in scholarly works by European naturalists in the 16th, 17th and 18th centuries (engraved plates for the Encyclopédie Méthodique, 1789, for example).

The jackalope legend in the U.S. is attributed by the New York Times to Douglas Herrick (1920-2003) of Douglas, Wyoming, in 1932. Postcards showing jackalopes were also sold in the U.S. in the 1930s. Horned hares abound in European and, particularly, German and Austrian, legends as the raurackl, rasselbock and wolpertinger.

The legend of the jackalope has bred the rise of many outlandish (and largely tongue-in-cheek) claims as to the creature's habits. For example, it is said to be a hybrid of the pygmy-deer and a species of "killer-rabbit". Reportedly, jackalopes are extremely shy unless approached. It has also been said that the jackalope can convincingly imitate any sound, including the human voice. It uses this ability to elude pursuers, chiefly by using phrases such as "There he goes! That way!". Although no jackalope has ever been captured alive, it is said that a jackalope may be caught by putting a flask of whiskey out at night. The jackalope will drink its fill of whiskey, and its intoxication will make it easier to hunt. It is also legend that the Cherokee Indians would eat these at the end of a vision quest.

In the American West, mounted heads and postcards of jackalopes are a popular item in some novelty stores. Jackalope legends are sometimes used by locals to play tricks on tourists. This joke was employed by Ronald Reagan to reporters in 1980 during a tour of his California ranch. Reagan had a rabbit head with antlers, which he referred to as a "jackalope", mounted on his wall. Reagan liked to claim that he had caught the animal himself. Reagan's jackalope hangs on the ranch's wall to this day. 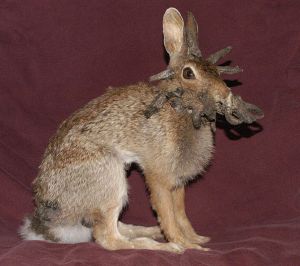 A mounted cottontail rabbit with a severe infection of the Shope papillomavirus - Museum of Natural History at the University of Kansas.

It is generally believed that the legend of the jackalope was inspired by sightings of rabbits infected with the Shope papillomavirus, which causes the growth of horn- and antler-like tumors in various places on the rabbit's head and body.[1]. On the other hand, the human imagination has often delighted in creating composites made from two or more animals (such as the griffin and chimera), and does not really need a logical reason to do so.