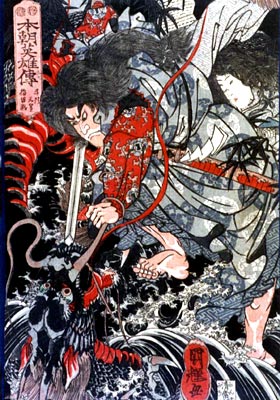 Like these other Oriental dragons, Japanese ones are usually water deities associated with rainfall and bodies of water, and typically depicted as large, wingless, serpentine creatures with clawed feet and reptilian heads.

Kiyohime Changes from a Serpent, by Yoshitoshi Tsukioka

The ca. 680 CE Kojiki and the ca. 720 CE Nihongi mytho-histories have the first Japanese references to dragons. "In the oldest annals the dragons are mentioned in various ways," explains de Visser (1913:135), "but mostly as water-gods, serpent- or dragon-shaped."

These two myths about Emperor Jimmu support the tradition that the Japanese Emperors are descendants of dragons. Dragons symbolized the Emperor of China along with those of Japan.

Dragons in later Japanese folklore were influenced from Chinese and Indian myths. 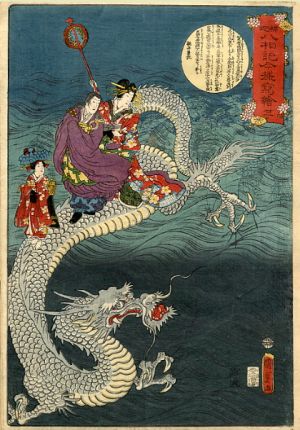 The Buddha riding a sea-dragon, by Kunisada. 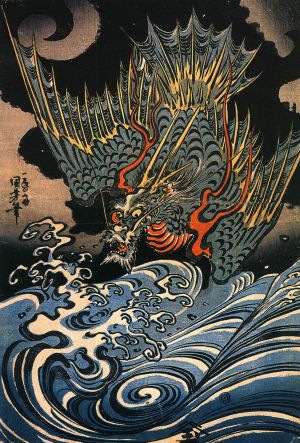 Chinese dragon mythology is central to Japanese dragons. The Japanese word for "dragon" is written with kanji "Chinese characters", either simplified shinjitai 竜 or traditional kyūjitai 龍 from Chinese long 龍. These kanji can be read tatsu in native Japanese kun'yomi and ryū or ryō in Sino-Japanese on'yomi.

Many Japanese dragon names are loanwords from Chinese. For instance, the Japanese counterparts of the astrological Four Symbols are:

The number of claws is one distinction between Japanese ryū and Chinese long dragons. "In Japan," writes Gould (1896:248), "it is invariably figured as possessing three claws, whereas in China it has four or five, according as it is an ordinary or an imperial emblem." 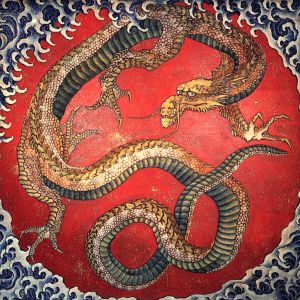 When foreign monks introduced Buddhism in Japan they transmitted dragon and snake legends from Buddhist mythology and Hindu mythology. The most notable examples are the nāga ナーガ or 龍 "Nāga; rain deity; protector of Buddhism" and the nāgarāja ナーガラージャ or 龍王 ”Nāgaraja; snake king; dragon king". De Visser (1913:179) notes that many Japanese Nāga legends have Chinese features. "This is quite clear, for it was via China that all the Indian tales came to Japan. Moreover, many originally Japanese dragons, to which Chinese legends were applied, were afterwards identified with Nāgas, so that a blending of ideas was the result." For instance, the undersea palace where Naga kings supposedly live is called Japanese ryūgū 龍宮 "dragon palace" from Chinese longgong 龍宮. Compare Ryūgū-jō 龍宮城 "dragon palace castle", which was the sea-god Ryūjin 龍神"'s undersea palace.

Some other examples of Buddhistic Japanese dragons are: 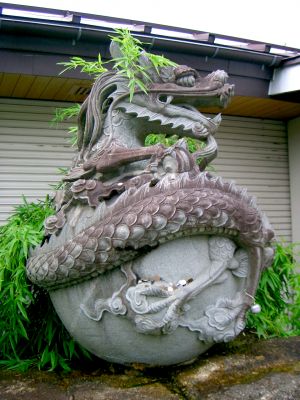 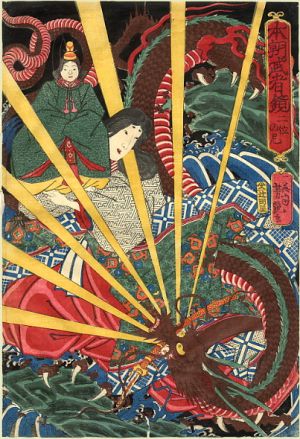 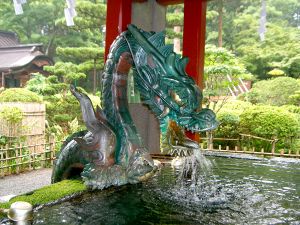 Japanese dragons are associated with both Shinto shrines and Buddhist temples, particularly those located near bodies of water where dragons supposedly reside.

Dragon lore is traditionally associated with Buddhist temples, and many of their Great Hall ceilings have dragon paintings. Like Japanese toponyms, temple names frequently involve dragons, for instance, the Rinzai sect has Tenryū-ji 天龍寺 "Heavenly Dragon Temple", Ryūtaku-ji 龍沢寺 "Dragon Swamp Temple", Ryōan-ji 竜安寺 "Dragon Peace Temple". According to legend (de Visser 1913:180), when the Hōkō-ji 法興寺 or Asuka-dera 飛鳥寺 Buddhist temple was dedicated at Nara in 596, "a purple cloud descended from the sky and covered the pagoda as well as the Buddha hall; then the cloud became five-coloured and assumed the shape of a dragon or phoenix".

Myths about dragons living in ponds and lakes near Buddhist temples are widespread. De Visser (1913:181-184) lists accounts for Shitennō-ji in Osaka, Gogen Temple in Hakone, Kanagawa, and the shrine on Mount Haku where the Genpei Jōsuiki records that a Zen priest saw a 9-headed dragon transform into the goddess Kannon.

Itsukushima Shrine on Miyajima or Itsukushima Island in Japan's Inland Sea was believed to be the abode of the sea-god Ryūjin's daughter. According to the Gukanshō and The Tale of Heike (Heinrich 1997:74-75), the sea-dragon empowered Emperor Antoku to ascend the throne because his father Taira no Kiyomori offered prayers at Itsukushima and declared it his ancestral shrine. When Antoku drowned himself after being defeated in the 1185 Battle of Dan-no-ura, he lost the imperial Kusanagi sword (which legendarily came from the tail of the Yamata no Orochi dragon) back into the sea. In another version, divers found the sword, which is currently housed at Atsuta Shrine. The great earthquake of 1185 was attributed to vengeful Heike spirits, specifically the dragon powers of Antoku.

Ryūjin shinkō 竜神信仰 "dragon god faith" is a form of Shinto religious belief that worships dragons as water kami. It is connected with agricultural rituals, rain prayers, and the success of fisherman.

Dragons are a familiar motif in Japanese art and architecture, literature, and popular culture. Some examples include:

Part of this article consists of modified text from Wikipedia, and the article is therefore licensed under GFDL.
Retrieved from "https://www.monstropedia.org/index.php?title=Japanese_dragon&oldid=15167"
Categories: