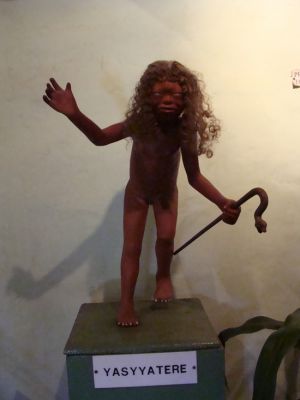 Jasy Jatere means literally "a little piece of the moon"

Jasy Jater is one of the seven cursed children of Tau and Kerana. He is considered to be the protector of the yerba mate plant and the lord of the siesta.

Not monstrous like his brothers, Jasy Jatere is usually described as being a small man or perhaps a child, with light blonde hair and sometimes blue eyes. He is fair in appearance, sometimes described as even beautiful or enchanting, and carries with him a magical wand or staff.

It is said that Jasy Jatere's power stems from the magical staff that he carries, and if one is able to take it from him, he breaks down and cries like a little child. In this state, one may ask him for the treasures that he is protecting in return for the staff, not unlike a captured leprechaun who must reward his captor with a pot of gold.

According to one widespread version of the myth, Jasy Jatere leaves the forest and wanders the villages looking for children who are not napping during their siesta. Although he is generally invisible, it is said that he shows himself to the children he finds not napping, and that any who look upon his staff fall into a trance. He may even lure them into the forest with a distinct whistle.

What happens to such entranced children differs depending upon which version of the story is told. Many Guaraní myths have multiple versions because there existed no written version of the language, and all myths have survived as word of mouth tales only. In the fairer version of the tale, Jasy Jatere is considered a friend of such disobedient children, taking them into hidden places in the forest to play and feeding them wild honey and fruit. At the end of the siesta, when all are weary from the play, Jasy Jatere gives them a magical kiss which transports them back to their beds with no memory of the experience.

Most versions of the story are less fair. Commonly, Jasy Jatere takes entranced children back to a cave where he puts out their eyes and imprisons them for an untold amount of time, sustaining them with wild fruits and berries until they become feral like animals. Still more gruesome tales say that the children are brought back to his brother Ao Ao, a cannibalistic creature who feeds upon their flesh.

These versions of the myth are told in a similar vein to the Bogeyman, designed to frighten children into being obedient and taking a nap during their siesta. Paraguayan parents are known to warn their children not to wander off alone during siesta to prevent being kidnapped by Jasy Jatere.