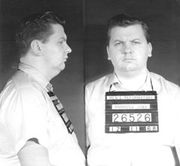 John Wayne Gacy, Jr., (March 17, 1942 – May 10, 1994) was an American serial killer. He was convicted and later executed for the rape and murder of 33 boys and young men, 29 of whom he buried in his crawl space under his house, between 1972 and his arrest in December 1978. He became notorious as the "Killer Clown" because of the many block parties he attended, entertaining children in a clown suit and makeup.

Gacy was born and raised Catholic in Chicago. He had a very distressed and distant relationship with his stern and abusive alcoholic father, John S. Gacy. He worked briefly in Las Vegas before returning to Illinois. He attended a business college and started a moderately successful career as a shoe salesman in Springfield, Illinois, where he became a prominent member of the Jaycees. In 1964 he married and moved to Waterloo, Iowa, where he managed a Kentucky Fried Chicken restaurant belonging to his wife's family.

However, Gacy's first marriage fell apart after he was convicted of child molestation in 1968. He was sent to prison for this crime, but he was a model prisoner and was paroled in 1970 after serving only 18 months. After he was released, he moved back to Illinois. He successfully hid this criminal record until police began investigating him for his later murders.

In 1971, he bought a house in an unincorporated area surrounded by the Chicago neighborhood of Norwood Park, lived there with his widowed mother and established his own construction business, PDM Contracting. He married a woman he had known since high school, and she and her two daughters moved in with him, and his mother moved out. He became a prominent and respected member of the community. In addition to his clown act, he became a committee member for the Democratic Party. In this capacity, he was even able to meet and be photographed with future-First Lady Rosalynn Carter[1].

It was also during this time that he claimed his first known victim, a teenage boy he picked up at a bus depot. His marriage fell apart and his wife divorced him in mid-1976. Gacy began a double life: respected member of the community by day, sexual predator and murderer by night.

No suspicion fell on him until December 12, 1978, when he was investigated following the disappearance of a teenage boy, 15-year-old Robert Piest, who was last seen with Gacy. A search of his house, by Des Plaines detective Joseph Kozenczak, revealed a number of incriminating items related to other disappearances. On December 22, 1978 Gacy went to his lawyers and confessed. He claimed he had first killed in January 1972. He confessed to 33 murders, indicating where the bodies were in 29 of the cases—buried under his house and on his property. The other four he said were thrown into the nearby Des Plaines River after he ran out of space beneath the crawlspace under his house. Most of the victims were young male prostitutes or teenage runaways. Some victims were also teenage boys whom Gacy had hired through his contracting firm. At least one of the victims was picked up at the bus station. The youngest victim was nine years old. The oldest was around 20. Nine of the victims' bodies were so badly decomposed that they were never identified. The bodies were uncovered from December 1978 to April 1979, when the last known victim was found downstream in the Illinois River.

On February 6, 1980, Gacy's trial began in Chicago. During the trial, he made a plea of not guilty by reason of insanity. However, this plea was rejected outright—his lawyer made the claim that Gacy had moments of temporary insanity at the time of each individual murder, but before and afterwards, somehow regained his sanity to properly lure and dispose of victims. Also, Gacy had made an earlier confession to police, and was unable to have this pulled as evidence. He was found guilty on March 13 and sentenced to death.

On May 10, 1994, Gacy was executed in the State Penitentiary in Joliet, Illinois, by lethal injection, after finishing his last meal consisting of shrimp, fried chicken, fresh strawberries, and then fries. His execution was a minor media sensation, and large crowds of people gathered for "execution parties" outside the penitentiary, with numerous arrests for public intoxication, open intoxicants and disorderly conduct. In an unusual display of gallows humor, the so-called "Gacy's Day Parade" (a parody of the "Macy's Day Parade") ensued. Vendors sold T-shirts and Gacy merchandise, and the people cheered at the moment when Gacy was pronounced dead.

Gacy's execution also proved problematic when the chemicals used in the lethal injection were mixed in a way that caused them to solidify, and as a result, he reportedly took 27 minutes to die. As a result of this problem, Illinois adopted a different method of lethal injection.

According to reports, Gacy did not express remorse. His last words were to the effect that killing him would not bring anyone back, and it is reported his last words were "You can kiss my ass", which he said to the Chief Chaplain of the Illinois Department of Corrections, Dr. William Fontaine prior to Gacy being led into the execution chamber.

Some have pointed to his poor relationship with his abusive, alcoholic father, his head trauma and subsequent blackouts in his teenage years as some basis for his acts. There has also been some speculation that murdering men and boys — whom he called "worthless little queers and punks" — was Gacy's subconscious expression of self-hatred for his own homosexuality (Gacy claimed to hate gays and "gay-acting people," and that he was bisexual.)[2]

After his execution, Gacy's brain was removed. It is currently in the possession of Dr. Helen Morrison, who interviewed Gacy and other serial killers in an attempt to isolate common personality traits held by such people. However, an examination of Gacy's brain after his execution by the forensic psychiatrist hired by his lawyers revealed no abnormalities. She has said Gacy did not fit into any psychological profile associated with serial killers, and the reasons for his rampage will probably never be known.

During his time on Death Row, Gacy took up oil painting, and his favorite subject was painting portraits of clowns. He claimed to have used his clown act as an alter ego, once sardonically saying that "A clown can get away with murder." After his execution, his paintings were sold at auction. Reportedly, the main buyer destroyed the paintings after winning the bids. [3] Another of his famous paintings is of transgressive punk rock singer/songwriter/performance artist GG Allin, who had visited Gacy in prison and corresponded with him until Allin's death in 1993; the painting is in the possession of Allin's brother and bassist, Merle Allin, and a black and white reproduction of the painting can be seen on the front cover of the soundtrack to the GG Allin documentary Hated: GG Allin And The Murder Junkies. Also, the satirical Church of the SubGenius has a drawing in its archives of its figurehead, the image of J.R. "Bob" Dobbs, which it states was drawn and signed by Gacy [4].

Part of this article consists of modified text from Wikipedia, and the article is therefore licensed under GFDL.
Retrieved from "https://www.monstropedia.org/index.php?title=John_Wayne_Gacy&oldid=14730"
Categories: