A Jotun, in Norse mythology, is a giant, one of a mythological race with superhuman strength, described as standing in opposition to the gods, although they frequently mingled with or were even married to these, both Æsir and Vanir. In Old Norse, they were called jötnar (sing. jötunn), or risar (sing. risi), in particular bergrisar, or þursar (sing. þurs), in particular hrímþursar ('rime-giant'). A giantess could also be known as a gýgr. 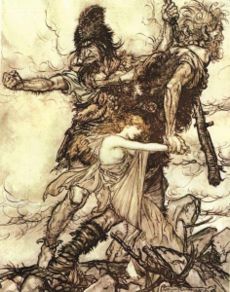 The giants Fafner and Fasolt seize Freyja in Arthur Rackham's illustration to Richard Wagner's version of the Norse myths.

Jötunn (Proto-Germanic *etunaz) might have the same root as "eat" (Proto-Germanic *etan) and accordingly had the original meaning of "glutton" or "man-eater." Following the same logic, þurs might be derivative of "thirst" or "blood-thirst." Risi is probably akin to "rise," and so means "towering person" (akin to German Riese, Dutch reus, archaic Swedish rese, giant). The word "jotun" survives in modern Norwegian as giant (though more commonly called trolls), and has evolved into jätte and jætte in Swedish and Danish. In modern Icelandic jötunn has kept its original meaning. In Old English, the cognate to jötunn are eoten, whence modern English ettin. Old English also has the cognate þyrs of the same meaning. [1]

As according to Ynglingatal, Fundinn Noregr and Hversu Noregr byggdist, jötnar were from Finland, the word could also be derived from the Finnish word jätti - "giant". A Finnish sea monster and possible god of war was called Tursas which may be related to the word þurs.

As a collective, giants are often attributed a hideous appearance – claws, fangs, and deformed features, apart from a generally hideous size. Some of them may even have many heads or an overall non-humanoid shape; so were Jörmungandr and Fenrir, two of the children of Loki, viewed as giants. With bad looks comes a weak intellect; the Eddas more than once liken their temper to that of children.

Yet when giants are named and more closely described, they are often given the opposite characteristics. Unbelievably old, they carry wisdom from bygone times. It is the giants Mímir and Vafþrúðnir Odin seeks out to gain this pro-cosmic knowledge. Many of the gods' spouses are giants. Njord is married to Skaði, Gerðr becomes the consort of Freyr, Odin gains the love of Gunnlod, and even Thor, the great slayer of their kind, breeds with Járnsaxa, mother of Magni. As such, they appear as minor gods themselves, which can also be said about the sea giant Ægir, far more connected to the gods than to the other giants occupying Jotunheim. None of these fear light, and in comfort their homes do not differ greatly from those of the gods.

The first living being formed in the primeval chaos known as Ginnungagap was a giant of monumental size, called Ymir. When he slept a giant son and a giantess daughter grew from his armpits, and his two feet copulated and gave birth to a monster with six heads. Supposedly, these three beings gave rise to the race of hrímþursar (rime giants or frost giants), who populated Niflheim, the world of mist, chill and ice. The gods instead claim their origin from a certain Búri. When the giant Ymir subsequently was slain by Odin, Vili and Vé (the grandsons of Búri), his blood (i.e. water) deluged Niflheim and killed all of the giants, apart from one known as Bergelmir and his spouse, who then repopulated their kind.

Their stronghold is known as Utgard, and is situated in Jötunheimr, one of the nine worlds of Norse cosmology, separated from Midgard, the world of men, by high mountains and dense forests. When living in worlds other than their own, they seem to prefer caves and dark places. Heimdall perpetually watches the Bifröst bridge from Asgard to Midgard, and Thor being too heavy to cross the Bifrost Bridge often ventures into Jötunheimr to get to Midgard, slaying as many of the giants as he is able on the way.