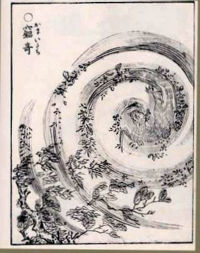 In Japanese mythology, Kamaitachi (窮奇, sometimes also 鎌鼬) is a weasel-like creature that rides in a whirlwind, most common in the Koshinetsu region.

Toriyama Sekien was presumably the first to imagine the apparition to have the form of a weasel. The weasel was a typical Toriyama pun - one of the folk names for the appparition was kamaetachi (構え太刀), meaning "attacking tachi", which he changed slightly to mean "sickle weasel".

Kamaitachi was traditionally classified as a wind yokai and is often associated with a trio of weasels with sharp claws, riding on a gust of wind and cutting peoples' skin on the legs. Sometimes the three are described as brothers, sometimes as triplets.

Sometimes a person walking in the mountains will be beset by a ferocious wind, and only later will they discover the deep but painless gashes made in their skin as if by some very sharp instrument. According to this interpretation, the first weasel knocked the unsuspecting victim down, the second cut the victim's flesh and the third applied medication to the wounds, so that at the time the victim realised what was happening they were left only with painful wounds that weren't bleeding.

The idea of lightning fast weasels wielding razor-sharp claws appealed to manga and anime artists and the kamaitachi often appear in those media.

Part of this article consists of modified text from Wikipedia, and the article is therefore licensed under GFDL.
Retrieved from "https://www.monstropedia.org/index.php?title=Kamaitachi&oldid=11362"
Categories: