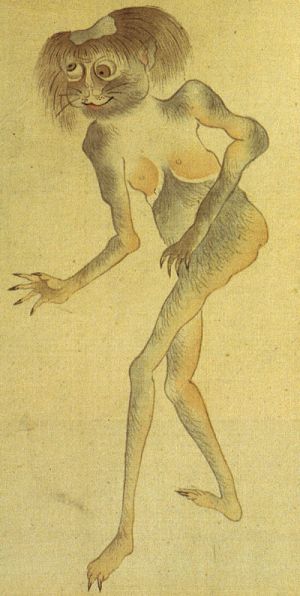 From an ancient manuscript

Although the kappa is a formidable creature, it is incongruously small, usually no bigger than a human child. It might have a bird-like beak or a pointed mouth, but sometimes it has a face like a monkey instead. It often sports a tortoise's shell on its back, and its slippery skin is blue or green or sometimes red. The most notable feature of the kappa, however, is the water-filled depressions atop their heads. These cavities are surrounded by scraggly hair, and this type of bobbed hair style is named okappa-atama for the creatures. The kappa's limbs are long and sometimes stretchy, and its elongated fingers and toes are webbed like a duck's or frog's, giving it remarkable powers of swimming. The expression kappa-no-kawa-nagare ("a kappa drowning in a river") conveys the idea that even experts make mistakes. The creature itself is also notorious for its fishy stink and its flatulence is known to be particularly noxious, the kappa often using gas in self defense when caught by fishermen. It is sometimes thought to have three anuses with which to expell these fumes.

The kappa derive their incredible strength from this strange depression atop its skull containing a magical elixir that gives it both strength and life. If attacked by a malovelant Kappa, all one must do to halt a Kappa's assault is to give a polite bow in its direction. The kappa possesses a deep sense of etiquette, and will be forced to return a deep bow, even if it means losing its head-water in the process. Once depleted, the kappa is seriously weakened and may even die. Other tales say that this water allows kappa to move about on land, and once emptied, the creatures are immobilized. Stubborn children are encouraged to follow the custom of bowing on the grounds that it is a defense against kappa. In addition, the Japanese Folklore says that the kappa is a master of Koppo; the bone-breaking technique, which was actually invented by them.

Kappa are mischievous troublemakers. Their pranks range from the relatively innocent, such as loudly passing gas or looking up women's kimonos, to the more troublesome, such as stealing crops, kidnapping children, or raping women. In fact, small children are one of the gluttonous kappa's favorite meals, though they will eat adults as well. They feed on these hapless victims by sucking out the shirikodama (a fabled ball found near the anus or entrails, blood, liver, or "life force", depending on the legend) through the anus.

Even today, signs warning about kappa appear by bodies of water in some Japanese towns and villages. Kappa are also said to be afraid of fire, and some villages hold fireworks festivals each year to scare the spirits away.

Kappa are not entirely antagonistic to mankind, however. They are curious of human civilization, and they can understand and speak Japanese (after living a thousand years accodring to some tales). They thus sometimes challenge those they encounter to various tests of skill, such as shogi or sumo wrestling. They may even befriend human beings in exchange for gifts and offerings, especially cucumbers, the only food kappa are known to enjoy more than human children. Japanese parents sometimes write the names of their children (or themselves) on cucumbers and toss them into kappa-infested waters in order to mollify the creatures and allow the family to bathe. Yet another way of winning a Kappa's friendship is to offer it some fresh cucumber sushi rolls, the one thing it loves to eat more than little children. There is even a kind of cucumber-filled sushi roll named for the kappa, the kappamaki. This affinity may have its origins in a custom of floating the year's first crop of cucumbers and eggplants (which kappa are also said to favor) into the local river in order to appease water gods and hungry ghosts.

Once befriended, kappa have been known to perform any number of tasks for human beings, such as helping farmers irrigate their land. They are also highly knowledgeable of medicine, and legend states that they taught the art of bone setting to mankind. Farmers and tillers of the soil are in awe of it as well, venerating the Kappa for its unfalteringness in guarding important sources of water from defilement. To this day, shrines and temples dedicated to the worship of a Kappa deity can be found in the rural hamlets and villages of Japan. Kappa may also be tricked into helping people. Their deep sense of decorum will not allow them to break an oath, for example, so if a human being can dupe a kappa into promising to help him, the kappa has no choice but to follow through. In a similar way, if someone were to ever trap a Kappa and then release it on condition that it never harms another human being, it will honor its pledge for the rest of its existence. 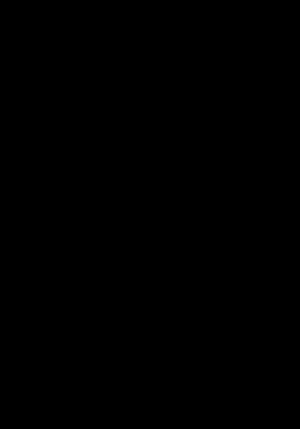 Kappas have been reported in Japan for centuries, being an important part of the folklore and, apparently, the real world, for the locals who see them in and near the water. The traditional kappas–the so-called “reedbed men” are described as amphibious with a monkey’s head, three-toed webbed feet, three fingers, triangular eyes, long pointed ears, and a “shell” on its back–definitely resembling a bipedal, humanlike primate. Some parts of Japan promote the notion that the kappa are still very much around. In the tourist literature for the highland town of Tono, in the Iwate Prefecture in northern Japan, guests are told they might just see some kappa, described as “meddlesome water imps given to seducing maidens and eating horse livers.”

A recent kappa encounter occurred on June 30, 1991 in the town of Saito in Miyazaki prefecture, when an office worker named Mitsugu Matsumoto and his wife Junko returned home for the evening. Upon opening the front door, the Matsumotos were confronted with a strange smell inside their home. Inside, they found dozens of small, wet footprints around the front door and in the hallway, bathroom, and two tatami rooms. At first they suspected a burglar, but they soon realized nothing had been stolen.

The police briefly surveyed the house, but found nothing except a floor soiled by 30 footprints, each measuring about 7 centimeters long and 6 centimeters wide, and having 4 or 5 toes. To Matsumoto, the footprints did not look human, nor did they appear to belong to any animal he could imagine.

Later that night, as Mrs. Matsumoto was putting laundry away, she discovered an unusual orange stain on some clothing. The next morning, as Matsumoto inspected the house more closely, he discovered a deposit of orange liquid on the portable stereo in the tatami room. He took a sample to the local public health center for analysis, and the results indicated the liquid had an extremely high iron content and a chemical composition resembling spring water.

Troubled by the incident, Matsumoto decided to visit a shaman. After listening to Matsumoto's story, the shaman encouraged him not to worry, explaining that the kappa indigenous to the nearby swamp enjoyed playing the occasional prank on local residents. The kappa were harmless, the shaman told him.

Harmless, perhaps, but Matsumoto found the kappa difficult to clean up after. He tried using detergent, paint thinner and gasoline to remove the footprints and orange stains, but nothing seemed to work.

where he is first seen as a famous masked professional wrestler to hide his true form.