The Karkadann was a mythical unicorn-like creature said to live on the grassy plains of India, Persia and North Africa. The karkadann was an extremely ferocious beast, driving away from its territory animals as big as the elephant. 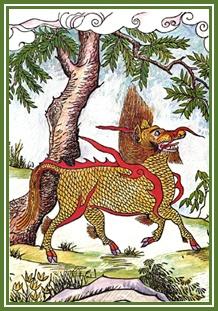 The creature was quite similar to a rhinoceros. Upon its horn was an engraving with the head of a man.

The ground shook whenever the creature ran, and it could make a loud bellow that frightened all animals away. It is said it would fight an elephant and kill it. It would then hoist it above its head in triumph using its horn, before going blind as the elephant's fat flowed into its eyes as it melted in the sun.

Ibn Fadlan a 10th century Arab Muslim writer reported having seen a creature corresponding closely to both the Kargadan. Ibn Battuta in his travelogue, calls the rhinoceros he saw in India karkadann.

Around 400 BCE, the historian Ctesias described the karkadann as follows:

"There are in India certain wild asses which are as large as horses, and larger. Their bodies are white, their heads dark red, and their eyes dark blue. They have a horn on the forehead which is about a foot and a half in length. The dust filed from this horn is administered in a potion as a protection against deadly drugs. The base of this horn, for some two hands'-breadth above the brow, is pure white; the upper part is sharp and of a vivid crimson; and the remainder, or middle portion, is black. Those who drink out of these horns, made into drinking vessels, are not subject, they say, to convulsions or to the holy disease [epilepsy]. Indeed, they are immune even to poisons if, either before or after swallowing such, they drink wine, water, or anything else from these beakers . . . The animal is exceedingly swift and powerful, so that no creature, neither the horse nor any other, can overtake it." ( sacred-texts.com)

Fossils of a very similar animal, the Elasmotherium, have been found in Eastern China and Southern Russia. Although Elasmotherium is thought to have died out in prehistoric times, the Chinese have legends of a similar creature named the zhi, and the Evenks also talked of a large bull with a single horn in the forehead. It is possible that Elasmotherium survived long enough to be the original source of any or all of the these traditions.