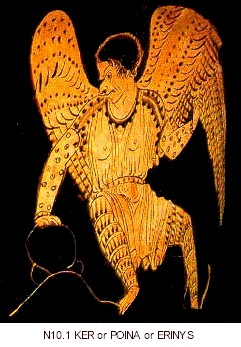 Detail of Poine (Retaliation) figure from a scene of the retribution of Medea. The children of Jason and Medea lie dead on an altar, princess Glauke with hair aflame burns in the palace, Kreon rushes to her aide, and Medea flees in a winged chariot.

In Greek mythology, the Keres (singular: Ker from the Greek Kêr) were female death-spirits and sources of evils. In some texts, Ker is the single goddess of violent death(Kêr or Kêres Danatoio).

They were described as dark beings clad in red with gnashing teeth, sharp claws and with a thirst for human blood. They would hover over the battlefield and search for dying and wounded men. In the fifth century Keres were imaged as small winged sprites in vase-paintings adduced by J.E. Harrison (Harrison, 1903), who described apotropaic rites and rites of purification that were intended to keep the Keres at bay.

According to Hesiod, the Keres were daughters of Nyx, and as such the sisters of Fate (Moirae), Doom (Moros), Death and Sleep (Thanatos and Hypnos), Strife (Eris), Old Age (Geras), Divine Retribution (Nemesis), Charon, and other personifications. Some, such as Cicero who calls them by a Latin name, Tenebrae, or the Darknesses, name them daughters of Erebus and Nyx.

As death daemons, they were also associated with the Hound of Hades, Cerberus, whose name can be read as the Ker of Erebus.

"And Nyx (Night) bare hateful Moros (Doom) and black Ker (Violent Death) and Thanatos (Death), and she bare Hypnos (Sleep) and the tribe of Oneiroi (Dreams). And again the goddess murky Nyx, though she lay with none, bare Momos (Blame) and painful Oizys (Misery), and the Hesperides ... Also she bare the Moirai (Fates) and the ruthless avenging Keres (Death-Fates) ... Also deadly Nyx bare Nemesis (Envy) to afflict mortal men, and after her, Apate (Deceit) and Philotes (Friendship) and hateful Geras (Old Age) and hard-hearted Eris (Strife)." (Hesiod, Theogony 211, translated by Evelyn-White).

The Keres execute the Fates' commands. They are often seen hovering around battle fields where they collect the souls of the deceased warriors. As psychopump monsters, they were believed to appear at the last moment to take the soul of the dying. They are also called “ The dogs of Hades ” because of their contribution to the increasing population of the Underworld.

Although no living being can escape them, the Keres have yet no absolute power over the life of men: they are under Zeus and the gods, who can stop them in their course or hurry them on. (Il. xii. 402, xviii. 115, iv. 11; Od. xi. 397.) Even mortals themselves may for a time prevent their attaining their object, or delay it by flight and the like. (Il. iii. 32, xvi. 47.)

"Medea went up on the deck. She covered both her cheeks with a fold of her purple mantle, and Iason (Jason) led her by the hand as she passed across the benches. Then, with incantations, she invoked the Keres (Spirits of Death), the swift hounds of Hades who feed on souls and haunt the lower air to pounce on living men. She sank to her knees and called upon them, three times in song, three times with spoken prayers. She steeled herself of their malignity and bewitched the eyes of Talos with the evil in her own. She flung at him the full force of her malevolence, and in an ecstasy of rage she plied him with images of death.

Is it true then, Father Zeus, that people are not killed only by disease or wounds, but can be struck down by a distant enemy? The thought appals me. Yet it was thus that Talos, for all his brazen frame, was brought down by the force of Medea’s magic. He was hoisting up some heavy stones with which tow keep them from anchorage, when he grazed his ankle on a sharp rock and the ichor ran out of him like molten lead. He stood there for a short time, high on the jutting cliff. But even his strong legs could not support him long; he began to sway, all power went out of him, and he came down with a resounding crash." - Apollonius Rhodius, Argonautica 4.1659

During the festival known as Anthesteria, the Keres were driven away. Their Roman equivalents were Letum (“death”) or the Tenebrae (“shadows”).

According to a statement of Stesichorus noted by Eustathius, Stesichorus "called the Keres by the name Telchines", whom Eustathius identified with the Kuretes of Crete, who could call up squalls of wind and would brew potions from herbs (noted in Harrison, p 171).

The term Keres has also been cautiously used to describe a person’s fate. In the second century AD Pausanias equated the two (x.28.4). "Here and elsewhere to translate 'Keres' by fates is to make a premature abstraction," Jane Ellen Harrison warned (Prolegomena to the Study of Greek Religion, "The Ker as Evil Sprite" p 170. See also Harrison's section "The Ker as Fate" pp 183-87).

An example of this can be found in the Illiad where Achilles was given the choice (or Keres) between either a long and obscure life and home, or death at Troy and everlasting glory. Also, when Achilles and Hector were about to engage in a fight to the death, the god Zeus weighed both warrior's keres to determine who shall die.

This Kerostasia, or weighing of keres may be paralleled by the Psychostasia or weighing of souls; a lost play with that title was written by Aeschylus and the Egyptian parallel is familiar. As Hector’s ker was deemed heavier, he was the one destined to die. The subject appears in vase-paintings, where little men are in the scales: "it is the lives rather than the fates that are weighed", Harrison remarks (Prolegomena p 184). "Hunger, pestilence, madness,. nightmare have each a sprite behind them; are all sprites," J.E. Harrison oberved (Harrison 1903, p 169), but two Keres might not be averted, and these, which emerged from the swarm of lesser ills, were Old Age and Death. Odysseus says, "Death and the Ker avoiding, we escape" (Odyssey xii.158), where the two are not quite identical: Harrison (p. 175) found the Christian parallel "death and the angel of death".

"The other army, as soon as they heard the uproar arising ... suddenly mounted behind their light-foot horses, and went after, and soon overtook them. These stood their ground and fought a battle by the banks of the river, and they were making casts at each other with their spears bronze-headed; and Eris (Hate) was there with Kydoimos (Confusion) among them, and Ker (Death) the destructive; she was holding a live man with a new wound, and another one unhurt, and dragged a dead man by the feet through the carnage. The clothing upon her shoulders showed strong red with the men's blood as she glared horribly and gnashed her teeth till they echoed. All [the Keres] closed together like living men and fought with each other and dragged away from each other the corpses of those who had fallen." - Homer, Iliad 18.535

The black Dooms gnashing their white teeth, grim-eyed, fierce, bloody, terrifying fought over the men who were dying for they were all longing to drink dark blood. As soon as they caught a man who had fallen or one newly wounded, one of them clasped her great claws around him and his soul went down to Hades, to chilly Tartarus. And when they had satisfied their hearts with human blood, they would throw that one behind them and rush back again into the battle and the tumult. - Hesiod, Shield of Herakles (248-57)

"For ere this [the opening of Pandora's jar] the tribes of men lived on earth remote and free from ills (kakoi) and hard toil (ponoi) and heavy sickness (nosoi argaleai) which bring the Keres (Death-Demons) upon men; for in misery men grow old quickly. But the woman [Pandora] took off the great lid of the jar with her hands and scattered all these and her thought caused sorrow and mischief to men." - Hesiod, Works & Days 90

"In his hands he [Herakles] took his shield, all glittering: no one ever broke it with a blow or crushed it. And a wonder it was to see ... In the centre was Phobos (Fear) worked in adamant, unspeakable, staring backwards with eyes that glowed with fire. His mouth was full of teeth in a white row, fearful and daunting, and upon his grim brow hovered frightful Eris (Battle-Strife) who arrays the throng of men: pitiless she, for she took away the mind and senses of poor wretches who made war against the son of Zeus ... Upon the shield Proioxis (Pursuit) and Palioxis (Flight) were wrought, and Homados (Tumult), and Phobos (Panic), and Androktasia (Slaughter). Eris (Battle-Strife) also, and Kydoimos (Confusion) were hurrying about, and deadly Ker (Fate) was there holding one man newly wounded, and another unwounded; and one, who was dead, she was dragging by the feet through the tumult. She had on her shoulders a garment red with the blood of men, and terribly she glared and gnashed her teeth." - Hesiod, Shield of Herakles 139

"There were men fighting in warlike harness, some defending their own town and parents from destruction, and others eager to sack it; many lay dead, but the greater number still strove and fought ... and behind them the dusky Keres, gnashing their white fangs, lowering, grim, bloody, and unapproachable, struggled for those who were falling, for they all were longing to drink dark blood. So soon as they caught a man overthrown or falling newly wounded, one of them would clasp her great claws about him, and his soul would go down to Haides to chilly Tartaros. And when they had satisfied their souls with human blood, they would cast that one behind them, and rush back again into the tumult and the fray. The Moirai or Fates Klotho and Lachesis were over them and Atropos less tall than they, a goddess of no great frame, yet superior to the others and the eldest of them. And they [the Keres] all made a fierce fight over one poor wretch, glaring evilly at one another with furious eyes and fighting equally with claws and hands. By them stood Akhlys (Death-Mist), mournful and fearful, pale, shrivelled, shrunk with hunger, swollen-kneed. Long nails tipped her hands, and she dribbled at the nose, and from her cheeks blood dripped down to the ground. She stood leering hideously, and much dust sodden with tears lay upon her shoulders." - Hesiod, Shield of Heracles 237