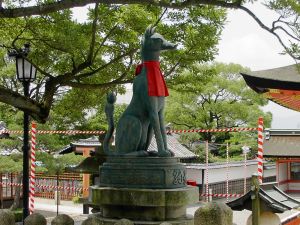 Statue of a kitsune

Kitsune is the Japanese word for fox. There are two subspecies of foxes in Japan, named Red Fox and Hondo Kitsune, and they are both related to mythological belief in Japasese folklore.

Kitsune are believed to possess great intelligence, long life, and magical powers. Foremost among these is the ability to shapeshifting into human form; a fox is said to learn to do this when it attains a certain age (usually a hundred years, though some tales say fifty).

Kitsune usually appears in the shape of a beautiful woman, a young girl, or an old man, but almost never an elderly woman.

The word spirit is used in its Eastern meaning, reflecting a state of knowledge or enlightenment. Any fox who lives sufficiently long, therefore, can be a fox spirit. There are two major types of kitsune; the myobu, or celestial fox, associated with Inari, who are presented as benevolent. and the nogitsune, or wild fox, who are often represented as malicious.

Kitsune are mostly noticed for is their tails as a fox may possess as many as nine of them. Generally, an older and more powerful fox will possess a greater number of tails, and some sources say that a fox will only grow additional tails after they have lived for a thousand years. After that period of time, the number increases based on age and wisdom (depending on the source). However, the foxes that appear in folk stories almost always possess one, five, or nine tails, not any other number.

When a kitsune gains its ninth tail, its fur becomes silver, white, or gold. These nine-tailed foxes gain the power of infinite vision. Similarly, in Korea a fox that lives a thousand years is said to turn into a kumiho (literally "nine-tail fox"), but the Korean fox is always depicted as evil, unlike the Japanese fox, which can be either benevolent or malevolent. Chinese folklore also contains fox spirits with many similarities to kitsune, including the possibility of nine tails. Looking for the fox's tail is one common method of attempting to discern the true nature of the kitsune, but some sources speak of other methods to reveal its true shape. Sometimes, a shapeshifted kitsune will cast the shadow of a fox rather than of a human; other stories say that a transformed kitsune's reflection will be that of a fox.

Supernatural powers commonly attributed to the kitsune include, in addition to shapeshifting, the ability to generate fire from their tails or to breathe fire, named 44kitsune-bi, literally foxfire, the power to appear in dreams, and the ability to create 'illusions' so elaborate as to be almost indistinguishable from reality.

Some tales go further still, speaking of kitsune with the ability to bend time and space, to drive people mad, or to take such nonhuman and fantastic shapes as a tree of incredible height or a second moon in the sky. Occasionally kitsune are ascribed a characteristic reminiscent of vampire or succubus Incubus (demon) these kitsune feed on the life or spirit of humans, generally through sexual contact.

Kitsune are often associated with the deity of rice known as Inari. Originally 'kitsune were Inari’s messengers, but the line between the two has become so confused that Inari is sometimes depicted as a fox.

In Japanese folklore, the kitsune are often presented as tricksters; sometimes very malevolent ones. The tricksters kitsune employ their magical powers to play tricks on people; those portrayed in a favourable light tend to choose as targets overly-proud samurai, greedy merchants, and boastful commoners, while the more cruel kitsune tend to abuse poor tradesmen and farmers or Buddhist monks.

Despite their role as tricksters, however, a kitsune will keep a promise it has given and will strive to repay any favour it owes Occasionally a kitsune will take a liking to and attach itself to a certain person or household; as long as it is treated with respect, it will use its powers for the benefit of its companion or hosts.

Kitsune are also commonly portrayed as lovers. These love stories usually involve a young human male and a kitsune who takes the form of a woman. Sometimes the kitsune is assigned the role of seductress, but often these stories are romantic in nature. Such a story usually involves the young man unknowingly marrying the fox, and emphasizes the devotion of the fox-wife.

Many of these stories also possess a tragic element — they usually end with the discovery of the fox, who then must leave her husband. On some occasions, the husband wakes, as if from a dream, to find himself far from home, filthy, and disoriented, and must often return to confront his abandoned human family in shame.

Victims of kitsunetsuki were often treated cruelly in hopes of forcing the fox to leave. It was not unusual for them to be beaten or badly burned. On some occasions, entire families were ostracized by their communities after a member of the family was believed to be possessed. In Japan, kitsunetsuki was a common diagnosis for insanity as recently as the early [20th century. Possession was the explanation for the abnormal behaviour displayed by the afflicted individuals.

Kitsune are reputed to be inordinately fond of deep fried tofu, a number of dishes, containing deep fried tofu, reference this love in their name; Kitsune Udon (udon noodle soup served with several pieces of deep fried tofu) and Inari zushi (sushi rice packed into pockets of deep freid tofu that have been simmered in a broth of soy sauce, mirin and rice vinegar).

Part of this article consists of modified text from Wikipedia, and the article is therefore licensed under GFDL.
Retrieved from "https://www.monstropedia.org/index.php?title=Kitsune&oldid=16485"
Categories: