In Belgian folklore, Kludde, or Kleure, is a malicious spirit or goblin which roams the Flemish countryside. 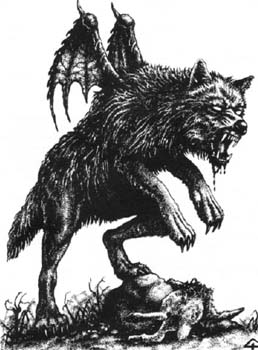 Kludde in its most famous form, a black dog.

Kludde usually appears in the shape of a monstrous Black Dog that walks on its hind legs. It can also assume the shape of a huge, hairy, black cat, a half-starved horse, a frog, a bat, or a horrible black bird. The creature also takes on more unusual forms for a road bogie, such as that of a tree, a shrub, or even a human being. Because its appearance was amorphous and it could take such a variety of shapes, Kludde's true form was unknown, if it even had a true form. It was sometimes described as a water sprite or goblin, and other times as a demon or even a manifestation of the Devil.

Kludde was a shapeshifter, and so could take on many different forms, depending on what it wanted to do or how it intended to play its pranks on humans. It could disappear or reappear at will to surprise victims and run at supernatural speeds to catch up with people who tried to run away from it, making escape impossible. When attacking, it could change its own height and weight. Whatever form it was in, Kludde was capable of speech.

In the tradition of similar entities such as Puck and the Kelpie, Kludde was a trickster spirit, although its tricks ranged from simple mischief to outright murder. Kludde was said to hide in the twilight of dawn and sunset and attack innocent travelers. Travelers would listen for the only sound which betrays that Kludde is in the vicinity: the rattling of the chains with which the spirit is sometimes covered. The faster one walks, the faster this monster follows, even able to outpace a victim who ran in a zigzag. It could also be identified by blue flames that floated in front of it or were in its eyes.

As a horse, Kludde would sometimes offer travelers a ride and, once they were mounted, would go at a breakneck pace, leading the victim on a terrifying ride. In this form it was little more than a prankster, since it would release its victims by throwing them into a pool of water and laugh at their misfortune, leaving them humiliated and angry but otherwise unharmed. At other times it would drive healthy horses from stables and viciously attack grooms who approached it.

In some stories, Kludde is depected as less murderous and was more of a trickster than a genuine threat. It sometimes changed itself into a tree to confuse travelers who relied on landmarks, or a shrub to trip people up. In other cases it would even take human form, entering homes and wastefully burning the firewood of the people whose houses it visited. At other times it would change into a sickly animal and trick people into carrying it on their backs, at which point it would grow heavier to the point of discomfort, exhaustion, or even death.

Kludde was at its most malicious in the form of a black dog, as in this form it was capable of doing real harm. It would walk alongside people walking on a road or path before jumping onto their backs and crushing them, much like Oschaert. Sometimes it would kill the victim, but at other times was satisfied by the fear it created and disappeared, leaving the person shaken but unharmed. At other times it would stand on its hind legs, rising up until it could tear out a victim's throat. Only the coming of daybreak or the sound of church bells could drive off Kludde and save the victim from a gruesome death.

Kludde or Kleure is the name of an evil spirit which plays its pranks in a great part of Brabant and Flanders. With respect to its form it is a perfect Proteus; for which reason the peasants are so fearful of him, that they will not for any consideration venture into a forest, a field, or a road, which, according to common report, is haunted by Kludde.

This spirit often transforms himself into a tree, which at first appears quite small and delicate, but soon raises itself to an immeasurable height, and is lost in the clouds, while everything around it on earth is thrown into confusion. Another time he will clothe himself with the skin of a great black dog, and so run on his hind legs, at the same time rattling a chain that is round his neck, and will spring suddenly on the neck of the first person he meets; and when he has thrown him on the ground, entirely vanish. But Kludde oftenest appears as an old, half-starved horse, and as such is a bugbear to all grooms and horse-boys, who relate that when they leave their horses in the field at night, it frequently happens that, instead of their well-known horse or mare, they set themselves on Kludde, who instantly runs off with them at full speed, until he comes to some water, into which he pitches his terrified rider. While the poor fellow is struggling to save himself, Kludde lays himself with his belly flat on the ground and sets up a fiendish laugh, until his victim, sullen and angry, shall have worked himself out of his bath.

Occasionally Kludde assumes the form of a cat, a frog, a bat, or any other animal. His approach may be known by two little blue flames, which fluttering and dancing go before him. These flames are, as far as can be ascertained, the eyes of the spectre. It is difficult to escape from Kludde, even by running from him at the utmost speed in a zigzag; for, like a snake, he will wind in all directions with equal rapidity.

When this spectre takes his flight, he cries : " Kludde, Kludde!" whence comes his name.