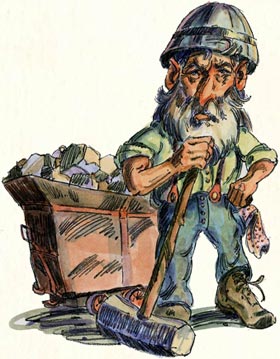 Knockers are a variety of kobolds that live in mines in Welsh and Cornish folklore.

Knockers are described as little men, but not misshapen, about 2 feet high, dressed in miniature mining attire complete with tiny picks, hard hats, and lunch buckets.

According to stories handed down from one generation of miners to the next, two kinds of tommyknockers inhabited the mines - the friendly, helpful elf and the mischievous, nuisance elf.

Their name comes from the knocking on the mine walls that happens just before cave-ins – actually the creaking of earth and timbers before giving way. To some of the miners, the knockers were malevolent spirits and the knocking was the sound of them hammering at walls and supports to cause the cave-in. To others, who saw them as essentially well-meaning practical jokers, the knocking was their way of warning the miners that a collapse was imminent or on the contrary indicating where the rich veins were to be found. They usually commit random mischief, such as stealing unattended tools and food.

A little piece of miners-food must be left for the knockers, or else they became mad and that would bring bad luck. Whistling and cursing they dislike as well and that is usually rewarded by the throwing of (harmless) gravel. In the hundreds of abandoned tin mines in Cornwall, knockers are still waiting for miners to lead them to hidden, rich veins.

In the 1820's, immigrant Welsh miners brought tales of the knockers and their theft of unwatched items and warning knocks to western Pennsylvania, when they gravitated there to work in the mines. Cornish miners, much sought after in the years following the 1848 gold rush, brought them to California. When asked if they had relatives back in Cornwall who would come to work the mines, the Cornish miners always said something along the lines of "Well, me cousin Jack over in Cornwall wouldst come could ye pay ’is boat ride", and so came to be called Cousin Jacks. The Cousin Jacks, as notorious for losing tools as they were for diving out of shafts just before they collapsed, attributed this to their diminutive friends and refused to enter new mines until assured by the management that the knockers were already on duty. Belief in the knockers remained well into the 20th century. When one large mine closed in 1956 and the owners sealed the entrance, fourth, fifth, and sixth generation Cousin Jacks circulated a petition calling on the mineowners to set the knockers free so that they could move on to other mines. The owners complied.

Originating in legend, tommyknockers were said to be direct descendants of ancient elves known as Spriggans and piskies.

Other put forward that the origin of knockers probably comes from early Welsh mythology, in which they may have been the pre-Brythonic inhabitants of the west of Britain. Skilled in the arts of mining and tunnelling, they taught these arts to the Britons. These legends may have influenced Tolkien's concept of the Dwarves, consummate miners and stoneworkers who taught these skills to men.

All things said, the difficult and often mysterious nature of mining may have led the Cornish miners to develop their belief in the tommyknockers - a superstition that helped explain the unexplainable. Many Cornish miners refused to enter a mine until assured that tommyknockers were on duty.